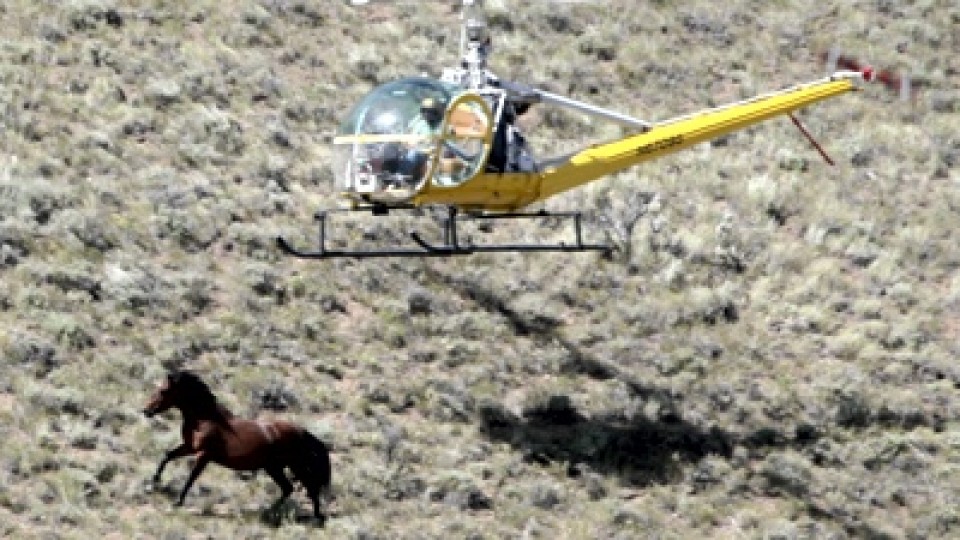 Horse meat has been showing up all over Europe, from Ikea’s Swedish meatballs to British lasagna. Meanwhile in Oklahoma, the state legislature is poised to legalize horse slaughter, and the Bureau of Land Management is meeting there today to discuss the management of wild horses under its care.

The BLM, which is part of the Interior Department, currently keeps 22,000 wild mustangs in Oklahoma. BLM keeps mustangs on government land, and when its herd gets too big for the range, it rounds them up and either keeps horses in “holding pens,” pays ranchers to graze them, or sells them for as little as $10 a head.

Today’s meeting comes less than six months after it was revealed that BLM has sold at least 1,700 horses and burros— almost 70 percent of the animals sold under its sale program during that time — to a known kill buyer since 2009. The evidence suggests those horses were trucked across the Mexican border for slaughter.

A 2011 video from a pro-slaughter horse summit shows a United States Department of Agriculture employee saying he is not aware of any inspection process at either the Mexican border or the Canadian border to prevent BLM-branded mustangs from being slaughtered, even though allowing the horses to go to slaughter is illegal.

The American Wild Horse Preservation Campaign plans to speak at today’s meeting and call for an end to BLM’s roundups and cheap sales as well as passage of the Horse Slaughter Prevention Act.

BLM has refused to humanely manage its mustang population, the group says, and in doing so has created a scenario where the only economically feasible way to manage their herd is to allow some to go to slaughter.

“Managing wild horses on the range with birth control and responsible range stewardship costs far less and avoids the bloodshed of the current roundup-remove-and-stockpile approach,” said Neda DeMayo, President of Return to Freedom, AWHPC’s founder and parent organization. “There is no question that the BLM is trying to create a crisis by stockpiling so many horses in order to justify slaughtering them.”

BLM adamantly insists it has never sold horses to slaughter, even after the story of sales to a known kill buyer emerged.

Last month BLM updated its policies on sales and herd growth, as well as plans for greater transparency.

The agency also says it practices fertility management to prevent roundups and stockpiling. But at today’s meeting, a BLM researcher reported that several of the contraceptives used in the past several years have been successful the first year, then had “suboptimal performance” the second year. The short version is that BLM’s fertility management is not working.

The inefficiency of these treatments shows in their numbers. According to AWHPC, BLM has 32,000 horses on public land and 50,000 more in holding, a situation AWHPC says is ripe for abuse.

Keeping wild horses safe may prove a difficult task for the Interior Department, but it doesn’t seem to have any trouble defending the cause of more controversial animals. In the late 90s, the grey wolf population was waning. Over the objections of ranchers whose livestock has since become fodder for the protected predators, more than 60 grey wolves were reintroduced in Idaho and Yellowstone National Park. The wolf population grew rapidly, rising to more than 1,000 by 2005.

Wolves in Michigan, Minnesota and Wisconsin were also carefully protected under the Endangered Species Act for several decades, beginning in 1978, when Interior noticed their population dropping. Their protected status was not removed until December 2011, when the population had risen to more than 4,000 wolves in the Great Lakes states.

“Once again, the Endangered Species Act has proved to be an effective tool for bringing species back from the brink of extinction,” Salazar said at the time. “Thanks to the work of our scientists, wildlife managers, and our state, tribal, and stakeholder partners, gray wolves in the western Great Lakes region are now fully recovered and healthy.”