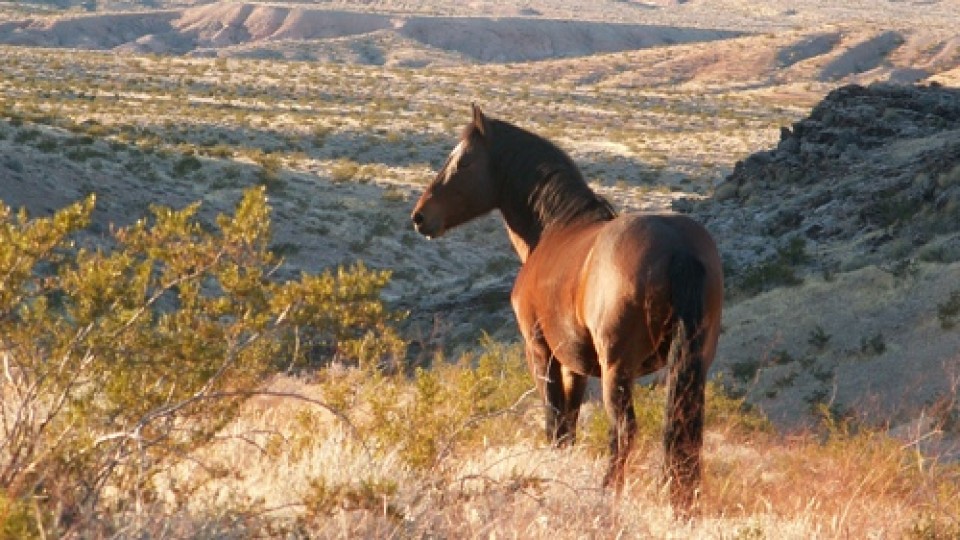 Carson City, NV (March 15, 2013) — Return to Freedom, the parent organization of the American Wild Horse Preservation Campaign, the ASPCA (American Society for the Prevention of Cruelty to Animals), Hidden Valley Wild Horse Protection Fund, and community horse advocates praised the signing of a new cooperative agreement with the Nevada Department of Agriculture (NDA) as a first step in establishing a humane approach to the control of the historic Virginia Range horses.

The agreement signed this week between Return to Freedom and the NDA will allow the sanctuary organization to purchase captured Virginia Range horses from the state for $100 and work with local groups to place them into permanent homes. Previously, the state had been sending captured mustangs to a livestock auction frequented by kill buyers who purchase horses for slaughter.

“We are pleased to enter into this agreement with the state of Nevada as a first step in implementing a humane program for the historic and locally-cherished wild horses of the Virginia Range. We look forward to the next step of this process, which will be implementation of cooperative agreements for on the range control of the Virginia Range wild horses. A host of solutions – including birth control, fencing, and diversionary feeding and watering – are available to mitigate public safety concerns,” said Neda DeMayo, Return to Freedom Founder and President.

“The ASPCA has a long history of advocating for horses, and we are extremely proud of this important step toward preventing Nevada’s iconic wild horses from falling into the clutches of kill-buyers at auction,” said Kevin O’Neill, senior legislative director of ASPCA Government Relations for the Western region. “A Nevada without wild horses is like Las Vegas without casinos – it’s unimaginable. We appreciate Governor Sandoval and Director Barbee’s willingness to engage with us on this important issue as well as AWHPC’s unflagging dedication to securing and carrying out this agreement.”

“This is a real opportunity to build on this first step and implement a win-win program that will benefit Nevada taxpayers, northern Nevada residents who enjoy the wild horses of the Virginia Range, and the horses themselves. We are grateful that the state has taken this first step, which will prevent captured mustangs from being sold to slaughter,” said Shannon Windle of Hidden Valley Wild Horse Protection Fund located in Reno, Nevada.

Since the fall of 2012, local advocacy rescue organizations – led by Hidden Valley Wild Horse Protection Fund and Least Resistance Training Concepts – have been forced to purchase Virginia Range horses captured by the NDA at the livestock auction in Fallon, Nev. To date, 137 Virginia Range horses have been rescued with the majority of financial support from the American Wild Horse Preservation Campaign.

In December 2012, Gov. Brian Sandoval received more than 18,000 faxes, letters and emails urging him to work with wild horse advocacy groups to protect the Virginia Range mustangs. A January 2013 meeting between AWHPC, the ASPCA and Nevada state officials set the stage for the current dialogue and agreement. To learn more, please click here.

Return to Freedom is dedicated to preserving the freedom, diversity and habitat of America’s wild horses through sanctuary, education and conservation. RTF provides refuge to 400 wild horses at its California-based American Wild Horse Sanctuary.

Founded in 1866, the ASPCA is the first animal welfare organization in North America and serves as the nation’s leading voice for animals. More than two million supporters strong, the ASPCA’s mission is to provide effective means for the prevention of cruelty to animals throughout the United States. As a 501(c)(3) not-for-profit corporation, the ASPCA is a national leader in the areas of anti-cruelty, community outreach and animal health services. For more information, please visit www.ASPCA.org, and be sure to follow the ASPCA on Facebook, Twitter, and Pinterest.