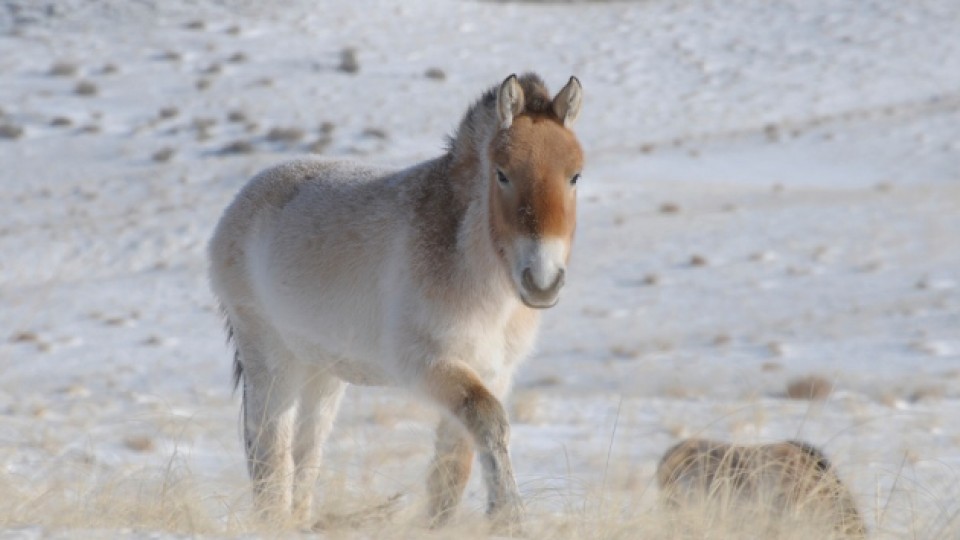 The humble horse has provided the oldest full genome sequence of any species — from a specimen more than half a million years old, found frozen in the permafrost of the Canadian Arctic. The finding, published in Nature today1, pushes back the known origins of the equine lineage by about 2 million years, and yields a variety of evolutionary insights.

The sequence was extracted from a foot bone of a horse that lived between 780,000 and 560,000 years ago. By sequencing the animal’s genome, along with those of a 43,000-year-old horse, five modern domestic horse breeds, a wild Przewalski’s horse and a donkey, researchers were able to trace the evolutionary history of the horse family in unprecedented detail. They estimate that the ancient ancestor of the modern Equus genus, which includes horses, donkeys and zebras, branched off from other animal lineages about 4 million years ago — twice as long ago as scientists had previously thought.

“We have beaten the time barrier,” says evolutionary biologist Ludovic Orlando of the University of Copenhagen, who led the work with colleague Eske Willerslev. Noting that the oldest DNA sequenced before this came from a polar bear between 110,000 and 130,000 years old2, Orlando says: “All of a sudden, you have access to many more extinct species than you could have ever dreamed of sequencing before.”

The team was able to sequence such old DNA partly because of the freezing ground temperatures in the area where the bone was found, which would have slowed the rate of DNA decay.

But the researchers were also successful because they had perfected techniques for extracting and preparing the DNA to preserve its quality for sequencing. They targeted tissue within the fossil which has high DNA content, such as collagen. They also combined DNA sequencing techniques to get maximum DNA coverage — using routine next-generation sequencing with single-molecule sequencing in which a machine directly reads the DNA without the need to amplify it up which can lose some DNA sequences.

Now, a major challenge for the field is to apply these techniques to other species such as ancient human species, including Homo heidelbergensis and Homo erectus, which lived hundreds of thousands to more than 1 million years ago. But such specimens are unlikely to be found buried in the DNA-preserving permafrost.

”The real challenge right now in the field is combining these next-generation sequencing technologies with the possibility of analysing non-permafrost samples,” says Carles Lalueza-Fox, a palaeogeneticist at the Institute of Evolutionary Biology in Barcelona, Spain.

Wild horses
Orlando and Willerslev’s paper hints at the other types of discovery that these technologies can enable. Their team, for instance, was able to support the contention that the Przewalski’s horse (Equus ferus przewalskii), which was brought back from near-extinction in Mongolia by captive-breeding programmes, is truly the last remaining wild horse when compared genetically with domesticated horses.

The researchers were also able to trace the size of the horse population over time by looking for genomic signatures of population size, and were thus able to show that populations grew in periods of abundant grassland, in between times of extreme cold.

But that is not surprising. Other researchers say that it is a proof of principle for how similar studies can be used to explore the factors that have driven evolution and speciation. “This kind of study is giving us novel views that show us the nuts and bolts of how evolution is working,” says Alan Cooper, director of the University of Adelaide’s Australian Center for Ancient DNA.

Although Willerslev and Orlando say that it would theoretically be possible to resurrect the ancient horse by implanting a modern horse egg with the ancient DNA, they have no plans to do so. They say that it has been a formidable task just to assemble the genome from many small fragments of DNA. For now, they prefer to focus on further improving their techniques, before testing them on other samples.

When they have mastered the technique, Willerslev predicts that it will have a huge impact on evolutionary biology. “Ancient genomics will change a lot of the ways we look at evolution to date,” he says.