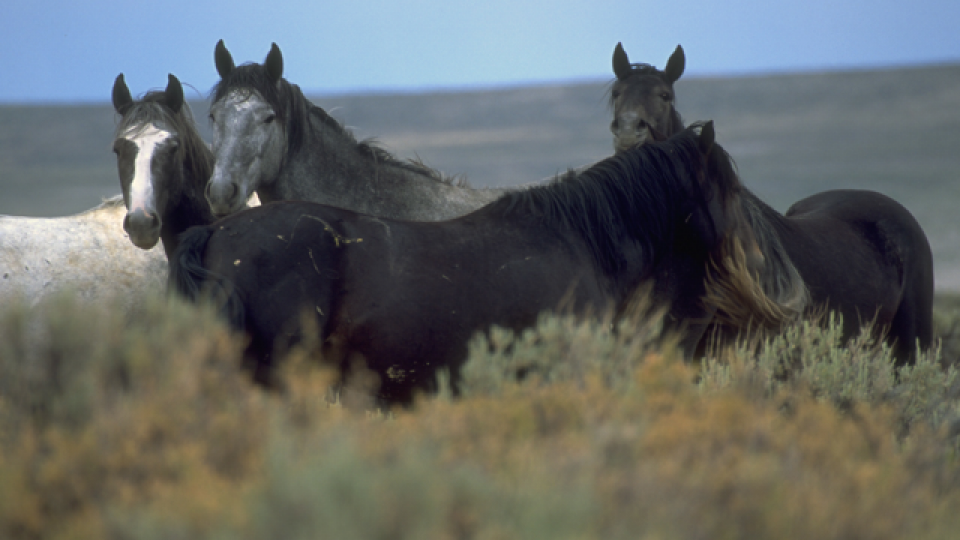 Winnemucca, NV (August 12, 2013) — Late yesterday, the U.S. Forest Service notified a coalition of wild horse advocacy and conservation groups that it was “issuing a stop order” to helicopter wranglers hired to roundup hundreds of wild horses on Forest Service, Bureau of Land Management (BLM), and tribal lands on the Ft. McDermitt Paiute Shoshone Reservation on the Nevada/Oregon Border and transport them to a slaughter auction.

The Forest Service’s decision to pull out of the roundup operation came after the American Wild Horse Preservation Campaign (AWHPC) and its parent organization, Return to Freedom, The Cloud Foundation, and the Western Watersheds Project sent two letters to the USFS outlining the multiple ways in which a stealth agreement between the Service to conduct the operation violated federal law.

However, the Forest Service also informed the coalition that the tribe was proceeding with the roundup, and, in fact, had captured 277 horses and already shipped 130 of them to the Fallon Livestock Exchange as of yesterday afternoon. The Forest Service also stated that it also had “no specific information about whether any of those animals came off National Forest or outlying [BLM] lands.”

The participating agreement between the Forest Service and the Fort McDermitt Tribal Council and a separate agreement between the BLM and the Forest Service, previously authorized the tribes to push wild horses from public lands onto reservation lands for the purpose of capture and sale to a slaughter auction. The area is in question is in close proximity to the BLM Little Owyhee Herd Management Area (HMA) where federally-protected mustangs live

“The Forest Service and the BLM have a responsibility to protect unbranded horses in this roundup. It is well documented that horses from the Owyhee Complex range outside their designated habitat zone to the border of the Forest Service lands in question,” said Suzanne Roy, AWHPC director. “Although the Forest Service has issued a ‘stop work’ order in response to our legal letters, serious questions remain about whether the federal government remains complicit in this shady operation where federally-protected wild horses are headed to a slaughter auction this Saturday. ”

“The Forest Service and BLM should be equally as concerned about these horses as we are if they are to uphold their legal obligations under the Wild Free Roaming Horses and Burros Act,” said Neda DeMayo, President of Return to Freedom, AWHPC’s parent organization. “In our negotiations, the Forest Service was willing to guarantee that any unbranded horses captured in this operation would be returned to federally-protected wild horse areas. The responsibility to ensure that federally protected wild horses are not sold for slaughter does not end now. This would not be the first time that that wild horses appear to have been taken off federal lands and laundered through third parties for slaughter. We call on the Forest Service to ensure that no unbranded wild horses captured from public lands around the Fort McDermitt reservation are sold at the auction for slaughter.”

“The Forest Service cannot just wash its hands of this situation now, after putting in place a stealth agreement to roundup these horses and send them to slaughter, and after admitting that the tribes have been working ‘for days’ to push horses off public lands and onto tribal lands toward the traps,” said Ginger Kathrens, Executive Director of The Cloud Foundation. “This is a betrayal of the American public and our wild horses and this entire matter must be investigated and the sale of all unbranded horses must be immediately halted.”

Today the groups sent another letter to the Forest Service demanding that officials verify the origin of all horses sent to auction by the tribe and prevent the sale of any unbranded horses at the Saturday auction. They also released the agreement between the Forest Service and the Tribe, which documents the intention of the FS to turn all horses — branded and unbranded — to the tribe, as well as use tax dollars to pay for the roundup and to ship the horses for slaughter.