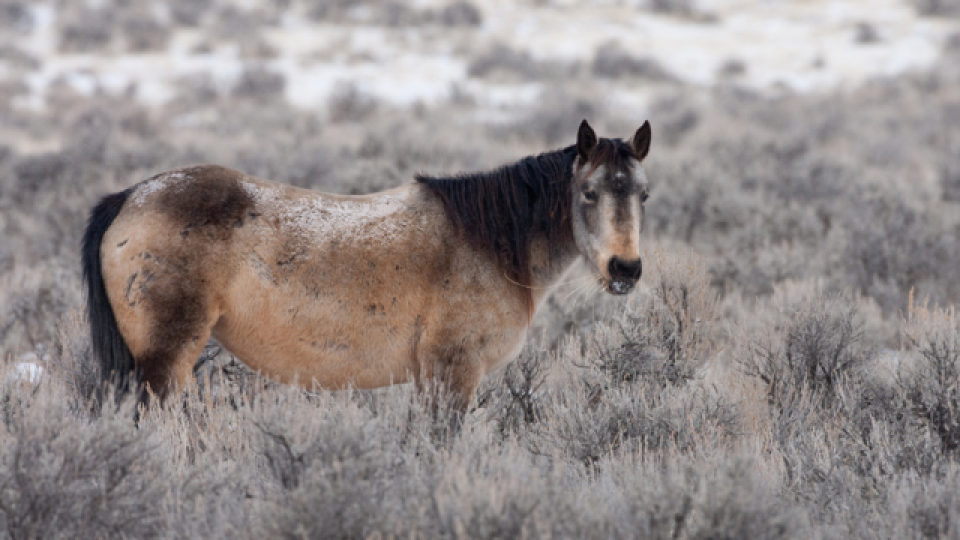 Winnemucca, NV (August 8, 2013) … Yesterday, the U.S. Forest Service (USFS), a division of the U.S. Department of Agriculture, informed the American Wild Horse Preservation Campaign (AWHPC), a national coalition, that it was reneging on its previous commitment to provide public observation of the taxpayer-funded helicopter roundup of wild horses on public lands in the Humboldt Toiyable National Forest. The capture operation is set to begin tomorrow, Friday, August 9, 2013, at 5 a.m., and the wild horses that are rounded up are scheduled to go to slaughter auction the following week.

Today, attorneys for AWHPC, Return to Freedom, The Cloud Foundation and the Western Watersheds Project sent a letter to the USFS outlining its legal obligations to ensure that federally-protected wild horses are not captured and sent to slaughter. The letter also addressed the USFS’ obligation, under the First Amendment, to provide the public with the opportunity to observe this taxpayer-funded, federal operation.

The USFS plans to use helicopters to roundup as many as 700 wild horses from federal and tribal Lands in northern Nevada and turn them over to the tribes to sell for slaughter. This USFS plan will proceed despite the stated opposition of the Obama Administration and Agriculture Secretary Tom Vilsack to the practice of horse slaughter.

The roundup will take place on the Fort McDermitt Paiute and Shoshone Reservation and public lands within the Humboldt Toiyabe National Forest, which is in close proximity to public lands where federally-protected wild horses live. Captured horses will be put up for auction on August 17, 2013 at the Fallon Livestock Exchange, which is frequented by kill buyers who buy horses and ship them to Canada or Mexico for slaughter. Taxpayers will foot the bill not only for the helicopter roundup but also for the transport of horses to the slaughter auction.

The USFS is required to protect wild horses and burros under the 1971 Wild Free Roaming Horses and Burros Act.

“The Forest Service is shirking its obligations under federal law to protect wild horses and uphold the public’s First Amendment rights,” said Neda DeMayo, President of Return to Freedom, AWHPC’s founding organization. “This backroom deal between the Forest Service and the Paiute-Shoshone tribe to use our tax dollars to roundup wild horses and send them to a slaughter auction is outrageous and unacceptable. This is a betrayal of the American public and it raises the question of whether the federal government is using the tribes to launder protected wild horses to slaughter.”

“Unless the captured horses are branded, there is no way to verify their origin, and they are likely protected wild horses who have strayed from their nearby Herd Management Area,” said Ginger Kathrens, Executive Director of The Cloud Foundation. “We demand that the Forest Service release any captured, unbranded horses because they may, in fact, be wild horses that are federally protected from slaughter. The Forest Service must definitively verify that no federally protected mustangs are caught up in the dragnet of this helicopter assault and slaughter operation.”

The Forest Service will pay to round up the horses and pay to transport them to the Fallon Livestock Exchange. According to AWHPC, any unbranded horses that are rounded up could be federally protected mustangs that wandered off Bureau of Land Management (BLM) LIttle Owyhee Herd Management Area which are lands designated as wild horse habitat areas. In fact, the BLM’s massive 450,000-acre Little Owyhee Herd Management Area is approximately 10 miles away from USFS lands and within proximity to the reservation; a BLM map for the 2012 Owyhee Complex wild horse roundup indicates that wild horses have been found on lands adjacent to USFS lands and near to the reservation. Wild horses are known to naturally travel great distances on a daily basis.

On May 30, 2013, the USFS and the tribes reportedly signed the agreement to execute this roundup. The decision to remove the horses was signed 15 days later. The USFS reportedly delegated the responsibility to inform the public about this federal operation to the tribe. The USFS conducted no environmental or legal analysis for the proposed action and did not provide the public with any notification or opportunity to comment on it.

Return to Freedom is dedicated to preserving the freedom, diversity and habitat of America’s wild horses through sanctuary, education and conservation, while enriching the human spirit through direct experience with the natural world. Return to Freedom provides a safe haven to over 300 wild horses and burros at its sanctuary in Santa Barbara, California and in Nevada where the group is planning to create a larger wild horse preserve.

The Cloud Foundation, a 501c(3) charity named for the wild stallion, Cloud, is dedicated to the preservation of wild horses and burros on public lands with special emphasis on isolated, genetically unique herds like Cloud’s in the Pryor Mountains of Montana.

Western Watersheds Project is a non-profit conservation group dedicated to protecting and restoring western watersheds and wildlife through education, public policy initiatives and litigation. The group works to influence and improve public lands management in 8 western states with a primary focus on the negative impacts of livestock grazing on 250,000,000 acres of western public lands.