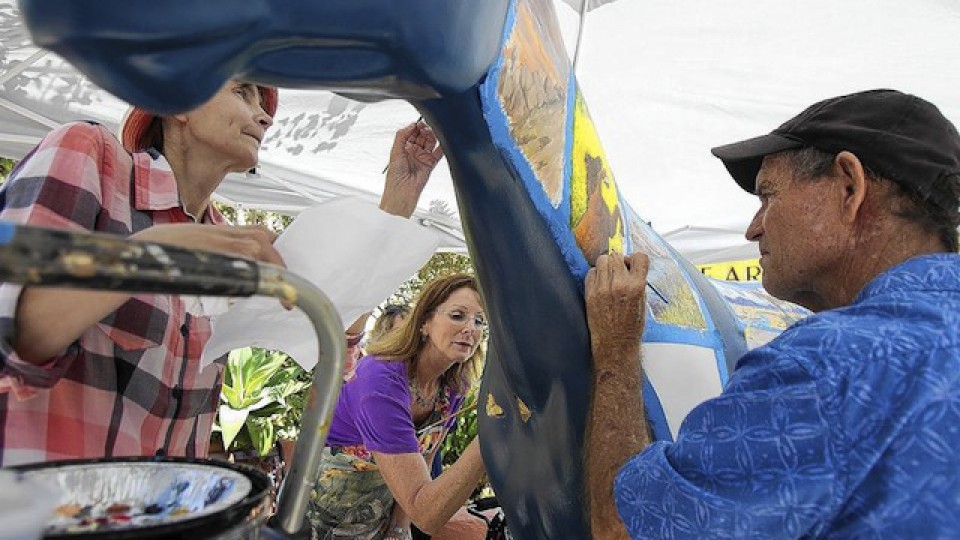 By the time a lucky winner takes it home, the fiberglass horse being painted at Art-A-Fair may resemble the boldly adorned mustangs that Native American tribes rode across the plains centuries ago.

Well, except for a few things. Those tribes may not have painted still lifes of wine and grapes on the horses’ hides, and the butterflies that start at the front of the Art-A-Fair horse’s torso and continue around the neck definitely look like a 21st century touch.

“Horse Power,” the sculpture that Art-A-Fair will auction off to benefit actual wild horses, pays tribute to the region’s rural past. Still, Carol Heiman-Greene, the project’s art director, didn’t impose any subject-matter restrictions when she rounded up about 20 artists to work on the piece.

When the sculpture arrived at the grounds at 777 Laguna Canyon Road, Heiman-Greene took the first brush to it, painting its white surface dark blue. Seven days a week, she and other artists have gathered around the installation on Art-A-Fair’s front lawn, some filling in panels and others decorating the mane, tail or other parts of the body. The final touch, Heiman-Greene said, may be to paint a “face mask” on the horse in traditional tribal style.

Laura Curtin, a first-time Art-A-Fair contributor, added the butterflies, which began in a panel and flittered out. Bill Denham, who has taken part in the juried show for two years, contributed a landscape with a group of equestrians in long shot.

Sealed bids for the sculpture start at $10,000 and may be submitted by Aug. 26 at Art-A-Fair’s sales booth. Proceeds will benefit Return to Freedom, a wild horse sanctuary in Lompoc, that works to protect breeds and promote conservation.

The campaign, spearheaded by the art dealership, Breton Associates, aims to create 50 or 60 painted horse sculptures to auction nationwide. Art-A-Fair, which did a similar project last year with an elephant statue, will be the site of the first auction.

Dana Yarger, the founder and director of Breton Associates, has termed the campaign “A Horse of a Different Color.” (Last year’s, which raised funds for the Asian Elephant Foundation, was titled “Elephant Parade America.”) The elephant statues were displayed publicly after being decorated, and Yarger plans to do the same with the horses.

“It becomes a messenger, and by inviting people to wonder why it’s there, it gives you an opportunity to share the story of the needs of the horse world,” he said.

He noted that mustangs might catch spectators’ fancy for a cultural reason.