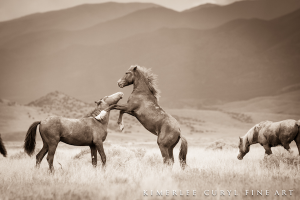 SALT LAKE CITY, UTAH… Late last week, the U.S. District Court for the District of Utah granted a motion by the American Wild Horse Preservation Campaign (AWHPC), The Cloud Foundation, Return to Freedom, photographer John Steele and wild horse advocate Lisa Friday to intervene in a lawsuit filed by the Western Rangeland Conservation Association and Utah ranchers against the Bureau of Land Management (BLM). The lawsuit seeks to compel the BLM to immediately round up hundreds of wild horses in Iron and Beaver Counties so that the ranchers can graze their livestock on public lands in the area.

“Our clients wanted to intervene in the case to defend wild horses from the pro-ranching special interests and prevent the government from acceding to their claims that the horses must be removed from the public lands to protect the private livestock that are allowed to graze on the same lands at taxpayer expense,” said Caitlin Zittkowski, of Meyer, Glitzenstein and Crystal, the Washington-DC based law firm that is representing the groups and individuals intervening in the case.

Last year, the BLM settled a similar legal attack by pro-ranching interests in Wyoming, agreeing to decimate nearly half of the state’s remaining wild horse population.

Under the current Administration, the BLM has rounded up so many wild horses that the number of mustangs stockpiled in government warehouses (50,000) now exceeds the number that remain free in the wild (under 33,000).

BLM, under pressure from Utah ranchers, rounded up 173 wild horses from the Blawn Wash management area in July. The ranchers claim that wild horses are overpopulating the range, even though livestock graze on 22 million acres of land in the state, while wild horses are restricted to just 2.1 million acres. There are fewer than 4,000 wild horses on BLM land in Utah, as compared to hundreds of thousands of cattle and sheep. In addition, approximately 80 percent of forage on the small amount of land designated as wild horse habitat in Utah is allocated to privately-owned livestock instead of to federally-protected wild horses.

Lisa Friday is a Virginia resident, wild horse adopter and board member for The Cloud Foundation.