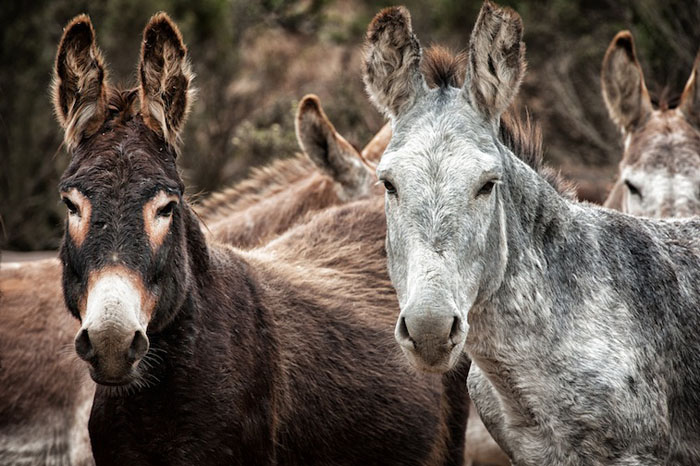 A Washington D.C.-based nonprofit on Tuesday released an analysis of Bureau of Land Management data that calls into question the agency’s study of the relative habitat impacts of wild horse and burros, and cattle grazing.

The organization, Public Employees for Environmental Responsibility, argued that the methods the BLM used to study Western range conditions overstates the role that burros and wild horses have on habitat destruction, while understating the impacts of cattle grazing.

Wild burros are captured in this 2011 photo during a U.S. Bureau of Land Management wild burro roundup. A national group, Public Employees for Environmental Responsibility, has called into question a BLM study completed on wild horse and burros, and cattle grazing impacts.

“The implication is that if the agency tells us the wild horses and burros have larger impact, they can argue roundups (of horses and burros) will have positive impacts on… habitat and livestock grazing can go unchanged,” the nonprofit’s advocacy director Kirsten Stade said.

Peter Lattin, who used to work as a contractor with BLM but moved to PEER after disagreements with the agency’s methods, said he and the organization have put together a database of BLM grazing allotments by pulling together hundreds records from a Freedom of Information Act request.

The analysis dealt primarily with habitat of the sage-grouse, a ground-dwelling chicken located largely in Nevada that is under consideration for endangered species status, but the organization has compiled data on BLM land management throughout the West. The BLM does not manage for sage-grouse habitat in Arizona.

In the BLM’s study of impacts on sage-grouse habitat, they measured all acres that had burros and wild horses but only the grazing allotments that had scored poorly on habitat health assessments, Lattin said. As a result the BLM reported nearly twice as much of the sage-grouse habitat is negatively impacted by burros and wild horses as by livestock grazing.

“They used the same term but treated them with entirely different methods,” he said.

Lattin said that if BLM had used the same methods, more than 95 percent of the negative impact on the bird’s habitat would have been caused by grazing compared to the wild animals.

Stade said that by downplaying impact that cattle grazing has on sage-grouse habitat the BLM makes it more difficult that the species could become listed and distorts policymaking as land managers set out to protect the species.

Dorothea Boothe, of the Phoenix BLM office, said in an emailed statement: “Our planning process is designed to solicit feedback from a broad array of stakeholders and we welcome input on these and other issues. We are currently update our land use plans to address the long-term viability of sage grouse across the West.”

The nonprofit group plans to release the broader dataset on the grazing allotments across the West as part of it website and will include interactive features, search functions and explanations of their interpretations of the data.