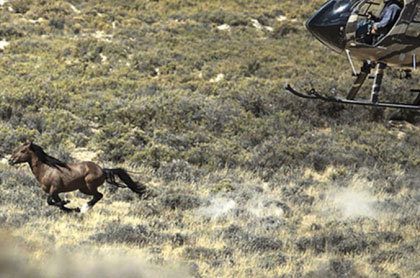 Request that Gov. Mead reveal the cost of livestock grazing on public lands in Wyoming

Cheyenne, WY (December 9, 2014) Wild horse advocates are firing back at Wyoming Governor Matt Mead and his announcement yesterday that the state has filed a lawsuit against the U.S Bureau of Land Management (BLM) over wild horses in his state, assailing the move as lacking merit and a waste of state resources.

“Governor Mead’s legal maneuver is a blatant attempt to scapegoat the small number of wild horses that remain in Wyoming for environmental damage caused by massive livestock grazing and commercial development of the public rangelands,” said Suzanne Roy, Director of the American Wild Horse Preservation Campaign. “It’s an attempt to secure more government subsidies for commercial interests that dominate the public lands at the expense of wildlife, including America’s iconic and federally-protected wild horses.”

“Statewide, wild horse numbers are far below the high Appropriate Management Level of 3,722, so I am left scratching my head on why Governor Mead chose to sue the BLM?” questions Ginger Kathrens, Executive Director of The Cloud Foundation. “Our question to Gov. Mead is, how many head of livestock graze within the 3.6 million acres in wild horse Herd Management Areas and what is the cost to the American taxpayer of subsidizing federal livestock grazing on all public lands in the state of Wyoming? Blaming around 2,500 wild horses for range damage in light of massive energy development and grazing by hundreds of thousands of privately-owned cattle and sheep simply makes no sense.”

“This lawsuit reveals a deep-seated hostility toward wild horses — which are protected by federal law and cherished by the American public – and desire to eradicate them from the Wyoming landscape,” said Neda DeMayo, founder and CEO of Return to Freedom. “It’s devoid of merit and wasteful of public resources. We are committed to continuing to defend Wyoming’s wild horses in federal court from these assaults by ranchers and their political allies who want to wipe out wild horses from the Western range.”

“Governor Mead’s plan for Wyoming will leave a special interest wasteland devoid of wild horses, with drilling pad after drilling pad and public lands grazed down to the dirt by livestock,” said Carol Walker of Living Images Photography, who has extensively documented the lives of wild horses in Wyoming. “What the Governor fails to understand is that these are NOT Wyoming’s wild horses NOR do these public lands belong to Wyoming – the wild horses and the public land belong to all of us, the taxpaying citizens of the United States of America.”

“What is happening in Wyoming is criminal. It violates federal laws that protect our dwindling remaining wild horses and goes against what many Americans have spoken for and supported,” said Kimerlee Curyl, a wild horse photographer who has also spent time in Wyoming. “Advocates and scientists alike have provided cost-effective ideas to help manage the herds numbers, the range health and the genetic viability of these animals, yet no one even tries to implement anything new.”

The advocates maintain that the governor’s decision to expend public resources on a lawsuit against the BLM is inexplicable in light of the facts. Fewer than 2,500 wild horses remain in the entire state of Wyoming and they graze on just 2% of the land grazed by livestock. Put another way, wild horses are restricted to 3.2 million acres of public rangelands in Wyoming, while livestock graze on 18 million acres. Further, Wyoming’s wild horse population is BELOW the designated “Appropriate” Management Levels set by the BLM.

AWHPC, The Cloud Foundation, Walker and Curyl, along with Return to Freedom, are plaintiffs in a lawsuit challenging the legality of the BLM’s most recent roundup and removal of more than 1,200 wild horses from the Wyoming checkerboard. The advocates are being represented by the public interest Washington D.C. law firm of Meyer Glitzenstein & Crystal.