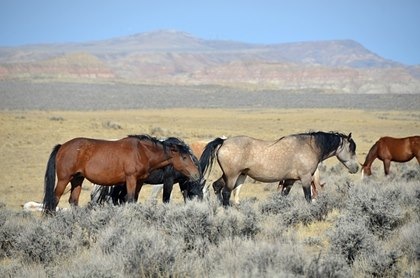 The state of Wyoming has filed a lawsuit alleging that the Department of the Interior (DOI) and the Bureau of Land Management (BLM) have failed to manage wild horse herds in that state. Meanwhile, a University of Wyoming rangeland specialist has released the results of a study evaluating how wild horses and cattle graze the rangelands.

Wild horses’ diets are comprised of 74 to 86% grass and grasslike plants depending on the season, Scasta said.

The Wild Free-Roaming Horses and Burros Act federally protects wild horses and burros residing in western states and places them in the BLM’s jurisdiction. The BLM Wyoming website states that the BLM manages about 3,000 horses in 16 different herd management areas (HMAs) in that state. The agency establishes appropriate management levels for each HMA to ensure ecological balance among wildlife, livestock, and wild horses, the BLM said.

Earlier this year the BLM began removing wild horses from a part of the range where private, federal, and state lands intermingle to comply with a consent decree between the BLM and the owners of livestock that also use BLM-owned grazing lands. Prior to the removal, Wyoming Governor Matt Mead said the state would sue the DOI and the BLM over its wild horse and burro management relative to range use.

On Dec. 8, Wyoming filed suit asking the court to order the federal agencies to manage the state’s wild horses according to the Wild Free-Roaming Horses and Burros Act.

“It is my belief, and the belief of other western governors, that the BLM does not have the resources to manage wild horses effectively,” Mead said in a written statement. “By filing suit it sends a message that wild horse management is a priority and the BLM must be provided the funding necessary to manage them.”

Meanwhile, University of Wyoming assistant professor and Extension rangeland specialist Derek Scasta, PhD, recently revealed data drawn from his study of how wild horses, cattle, and other animals consume plants growing on their rangelands. The data, drawn from 12 states and one Canadian province, compared plant matter present in fecal matter derived from each species, he said.

Scasta said the data revealed that wild horses and cattle compete for resources on the range. Wild horses’ diets are comprised of 74 to 86% grass and grasslike plants, depending on the season, he said.

“Grass consumption by horses typically equals or exceeds that of beef cattle and is greater than sheep, elk, pronghorn, and mule deer,” Scasta said.

“The lawsuit is a baseless attempt to scapegoat wild horses and divert attention from the wide-scale environmental destruction caused by livestock grazing in Wyoming,” she opined.

Meanwhile, BLM spokeswoman Shelley Gregory declined to comment directly on the lawsuit, saying “the BLM will await the court decision before commenting.” She did say, however, that the agency works with those on all sides of the wild horse management issue.

“The BLM works with all stakeholders to balance multiple use on public land and welcomes input from any person or organization offering potential alternatives or ideas on any issue,” Gregory said.