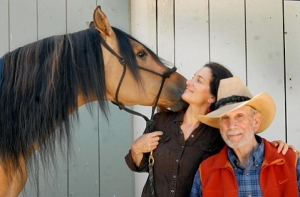 LEGACY OF FREEDOM: Bill DeMayo, here with his daughter Neda and Spirit, dedicated his ranch to his family and the wild horses they save.
Photo: Melanie Stengel

My father, William Samuel DeMayo, was born in Bridgeport, Connecticut, on January 22, 1921. His birth name was Querino Sabatino De Meo. He was born to Caterina (De Battista) De Meo and Lodovico De Meo, who both immigrated to America from Abruzzi, Italy.

When my sister and I were growing up, my father was one of the few Italians climbing the corporate ladder at the Ernst and Ernst accounting firm in New Haven, Connecticut. My father worked long hours, but he always greeted us when he came home with a big hug, lifting us up to the ceiling. That is the way it would always be — him lifting us up joyfully with a strong embrace!

My father always said, if you lift others, you rise with them. He was a positive and charming human being who often helped people without them even knowing it.

His initials on his license plate spelled WSDM, Wisdom, which befitted the man we all knew, a kind and fair man. But as kind as he was, he could read insincerity and deception better than any psychic, and he had no tolerance for it.

My father said that as he looked back, he realized that his life was indeed charmed and that was a testament to the happiness sharing brings.

When he completed his tour of duty as a bombardier in WWII, the United States government made it possible for him to obtain a college degree through the GI Bill. He was always so appreciative of this and referred to it as one of our country’s most inspired gifts ever offered to war veterans.

My father worked for the IRS and then became a CPA and later an estate planner. He began to understand how parents could provide financial gifts to their children and then disperse those gifts during their lifetimes. In this way, parents could enable their children to obtain the benefits of their future inheritance and live to share in the experience of how their gifts are used and cultivated.

In 1998, we, as a family, decided to sell our securities in order to purchase a 300-acre ranch in Lompoc, California. This ranch served the aims and purposes of our entire family, and it enabled me to launch the Return to Freedom wild horse sanctuary.

The ranch enabled my mother, Stella, and father, known to all as Bill, to enjoy and share their retirement with us. My sister, Diana, enjoys the ranch as a vacation retreat, and she brings her son, my nephew, Tommy, and her husband to commune with nature and with us. Tommy has brought his class up every year for camping and hiking and learning from the natural world.

At the Return to Freedom Ranch, my parents shared their home and lives with all of us and more than 300 wild mustangs that might otherwise have been abandoned, abused, or slaughtered. My father often expressed how he and my mother’s lives were so enriched by the volunteers, educators, and visitors who came to enjoy and learn about these beautiful animals. He delighted, with my mother, in the children who came to participate in the numerous youth programs, and he took great pride in the success of Return to Freedom and its pioneering efforts in keeping wild horse family bands intact, so that they could enjoy their families as nature intended.

My father’s life was fuller and richer by virtue of what he shared. My sister and I have been enriched by the gratitude we share for our father and mother and the love they shared with us.

My father passed away on May 4, 2014 — he would be 94 years old this January 22, 2015. He loved good and bad jokes and friends and family, and he loved to sing! He sang until he peacefully took his last breath. We are so grateful to everyone who laughed and sang with him and for the kind people at Serenity House in Santa Barbara.

Bill enjoyed his life to the fullest. He was grateful and gracious to the end and leaves behind a legacy and example that inspires us all. My father is in the hills and beautiful skies over the Return to Freedom Ranch. We celebrate him!

Donations in his name may be made to Return to Freedom and will be earmarked for the Freedom Legacy Fund in honor of William DeMayo as part of Return to Freedom’s endowment (original.returntofreedom.org).