Stand off in the Sagebrush Obstructs Pioneering Efforts for Wild Horses 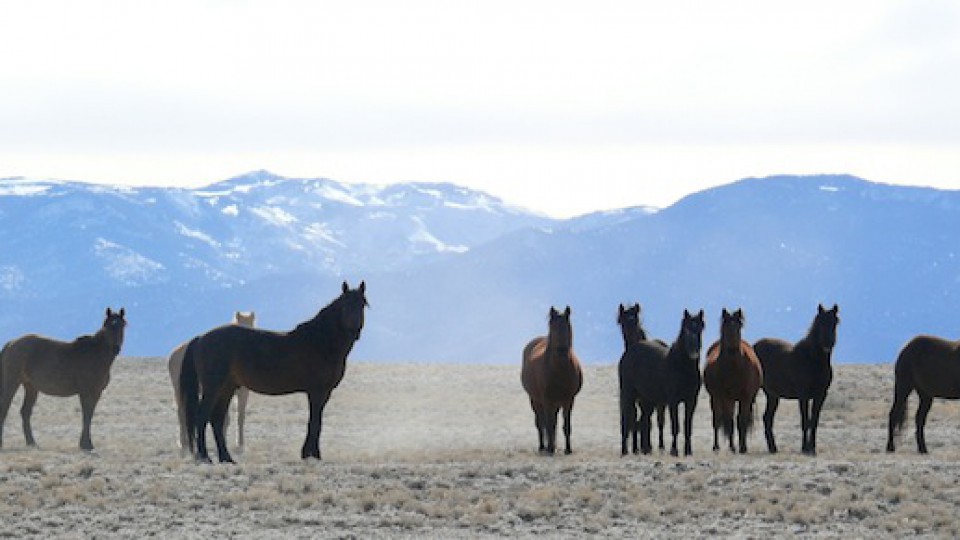 Plans to re-release 186 wild horses back onto their range Saturday morning are being blocked in a stand-off on Highway 50. Eureka County Commission has filed an IBLA appeal (Interior Board of Land Appeals) on behalf of livestock rancher Kevin Borba. Borba has a grazing permit on the Herd Management Area (HMA). Eureka County Commission is demanding that the Bureau of Land Management (BLM) ship all the horses to the government holding facility in Palomino Valley, Nevada.

BLM’s intent is to proceed with their gather plan as published which includes the re-release of the horses. For now, 186 horses await an uncertain fate pending a review of the appeal filed by Eureka County with the IBLA. The result of a 2013 national public survey revealed that seventy–two percent of Americans want wild horses protected as living symbols of our western heritage.

Borba, a fairly recent transplant from California, is not new to media attention. In April 2014, he was a very vocal supporter of “trespass cattle rancher” Cliven Bundy. Borba, also in trespass by grazing his cattle without paying his grazing lease fees, rallied supporters for Bundy on guerilla media, while claiming to be a victim of the federal government himself.

The groundbreaking Fish Creek Management Plan, now in jeopardy, calls for the release of 186 horses back onto their range with 104 of the mares now treated with a non-hormonal contraceptive vaccine.

The Fish Creek Management Plan is designed around recommendations released in 2013 by the National Academy of Sciences after a two-year study commissioned by the National BLM Program Office for over $1 million and funded by the American taxpayer. The progressive management plan is the result of a ten-year management strategy. The plan is forged to support fiscally responsible humane and effective methods to minimize the unsustainable capture and warehousing of wild horses. The plan also incorporates data collection as recommended by the National Academy of Sciences findings, such as identifying genetic health, seasonal movement, impact to herd structure, and range-use patterns.

The unique environment at the Fish Creek Herd Management Area encompasses 230,000 square acres and will be the largest area for native PZP contraception to be used as part of an ongoing study in on-the-range management. The herd is an extremely healthy and diverse population of wild horses, including the largest population of rare Curlys, which make up 16% of the herd.

“The management plan for Fish Creek is an inspiring step forward for all the dedicated advocates, ranchers and government employees that have worked hard for years on solutions that will keep our wild horses on the range!,” said Neda DeMayo, President of Return to Freedom, a wild horse conservation organization. “While proven effective and safe management methods are delayed, the real battle rages on. As America’s wild horses face their last stand, we need solutions that work for range resources, the ranchers and our wild horses – now.”

Laura Leigh, founder of Wild Horse Education, a supporter of the Fish Creek management plan, has been on site throughout the roundup and will volunteer to help with the adoption of the 238 younger horses removed from the range. “I have been documenting the Fish Creek range and this herd for years, as well as the trespass cattle here. We finally have a fair and sane management plan that makes sense for today. To lose ground in a stand-off reminiscent of an old Western movie will be a giant step backwards,” Leigh said.

Tragically, as drought continues to impact rangelands and wilderness areas across the west, ranchers target the wild horses for removal even when they are outnumbered by livestock on an average of thirty-five to one. Ironically, the public land rancher clings to a sense of ownership of our public lands, rooted in a culture that is disappearing along with our wild horses.

Return to Freedom (RTF) is a national non-profit dedicated to wild horse preservation through sanctuary, education and conservation. RTF advocates for the redirection of funds used for roundups and holding to minimally invasive on-the-range management solutions.

Wild Horse Education (WHE) educates the public about the plight of wild horses and burros and works to end the inhumane treatment of these heritage animals through a scientifically based management strategy in the wild.