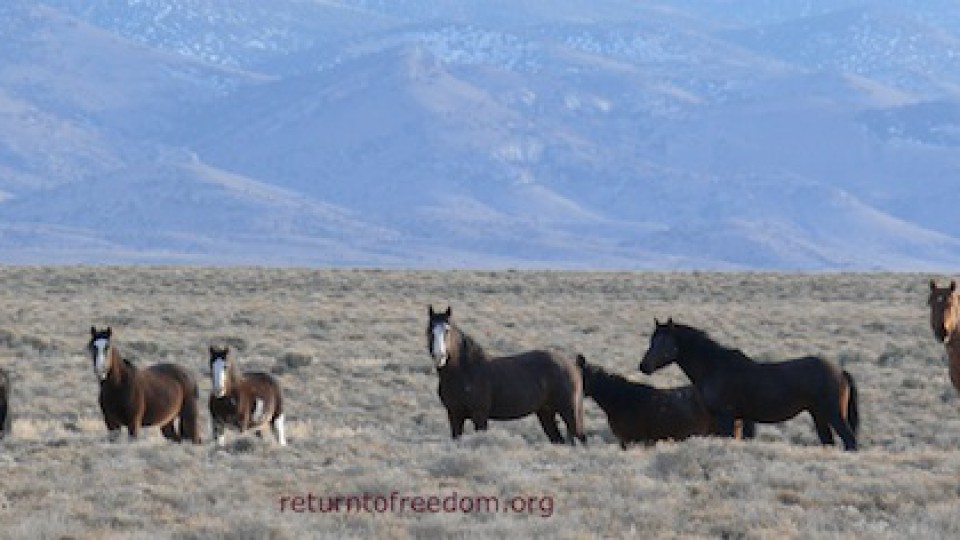 The U.S. Bureau of Land Management is holding off on plans to return 186 wild horses to the range in central Nevada pending the review of an appeal filed by a rancher and rural county opposed to the move.

The agency originally had planned to return 104 mares treated with a fertility control vaccine and 82 studs to the sprawling Fish Creek Herd Management Area (HMA) near Eureka on Friday.
They were among 424 horses removed from the HMA during a roundup that ended earlier this week. The bureau routinely thins what it calls overpopulated herds on public land across the West, sending horses that aren’t adopted to pastures in the Midwest for the rest of their lives.

Rancher Kevin Borba and Eureka County commissioners, who filed the appeal with the Interior Board of Land Appeals on Friday, oppose the return of any of the 424 horses to the range.

Borba said the BLM has drastically reduced his livestock allotments in the HMA while allowing well over twice as many wild horses in it as it can support. The HMA’s “appropriate management level” of wild horses is between 101 and 170, according to the agency.

Borba said he thinks the fertility control vaccine is far less effective than the BLM claims, and horse numbers will further explode as a result. Ranchers view wild horses as competition for scare forage in the arid West.

“We (ranchers) have a right to be here and we don’t want them to turn out the horses,” Borba told The Associated Press. “By turning out horses now they’re not accomplishing anything. It’s asinine and doesn’t make sense.”

BLM spokesman Paul McGuire said the agency routinely releases mares treated with fertility control drugs back to the range. Varying numbers of studs also are released back to the range to help maintain the genetic viability of herds, he said.

“Fertility control is a critically important tool to achieve an appropriate management level over the long term,” McGuire said.

The agency has asked the Interior Board of Land Appeals for an expedited review of the appeal and hopes to be able to reach a decision on the fate of the 186 horses on Monday or Tuesday, he said.

Horse advocates praised the BLM’s management plan for the Fish Creek HMA, saying it’s in line with recommendations released in 2013 by a National Academy of Sciences panel calling for increased emphasis on fertility control.

Fertility control is successful in 91 percent to 96 percent of mares, they said, and reproduction will show a decrease within two years.

“We finally have a fair and sane management plan that makes sense for today,” activist Laura Leigh said. “To lose ground in a standoff reminiscent of an old Western movie will be a giant step backwards.”