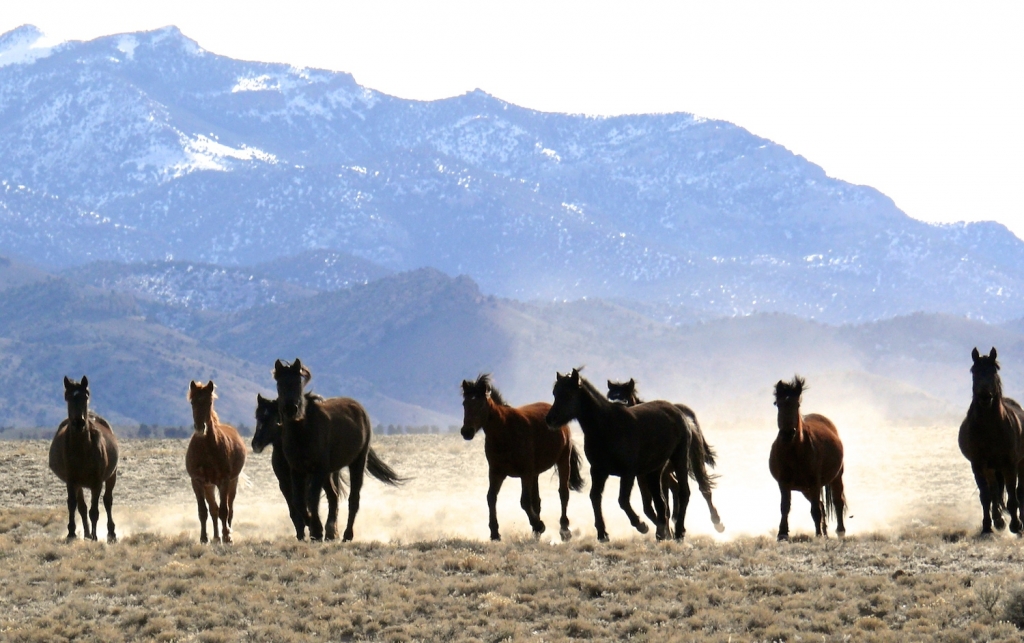 Eureka County, Nevada (February 23, 2015)… Wild horse advocates today blasted a group of Nevada “welfare ranchers” for blocking the Bureau of Land Management’s (BLM’s) planned release of nearly 200 wild horses back to the range in the Fish Creek Herd Management Area (HMA). The BLM rounded up the horses last week, treated them with the PZP birth control vaccine and was prepared to return them to the public lands when a small group of ranchers filed a last-minute legal appeal. Although not legally required to do so, the agency postponed the release until the appeal is heard. Instead of returning the horses to the wild this weekend, the BLM – at taxpayer expense — shipped the horses to holding facilities near Reno, Nevada.The last of the horses were trucked from the range today.

Leading the charge against the horses’ release is Kevin Borba, who holds a BLM permit to graze livestock on the public lands in the Fish Creek HMA. Earlier this year, the BLM fined Borba nearly $30,000 for violating the terms of the permit by grazing cattle on public lands where and when they were not authorized.

“I’ve personally documented these ranchers abusing their privilege to graze private livestock on public lands,” said Laura Leigh founder of Wild Horse Education. “This is the welfare ranchers’ latest attempt to dictate public lands policy and stop the BLM from bringing an antiquated public land program into modern times. The ranchers would rather see these federally-protected wild horses rounded up and sent to slaughter so they can continue to monopolize our public lands.”

“While effective and safe management methods are delayed, the real battle rages on,” said Neda DeMayo, founder of Return to Freedom. “On one side, the BLM is implementing a scientifically-based, cost-effective and humane wild horse management plan. On the other side, ranchers and others are fighting against this birth control program to continue the removal of thousands of wild horses from our Western public lands.”

“Like other public lands ranchers, Borba views wild horses as competition for cheap, taxpayer-subsidized grazing. This is fundamentally a conflict over how are public lands are managed and for whom. Will a small group of cattleman be allowed to continue to dominate public lands management and send taxpayers the bill?” said Suzanne Roy, director of the American Wild Horse Preservation Campaign. “Our public lands belong to all Americans, not just a handful of welfare ranchers in Eureka County, Nevada.”

In addition to receiving subsidies for below-market grazing fees – estimated to have cost taxpayers $1 billion over the past decade – the ranchers fighting the wild horse release regularly benefit from taxpayer-funded programs that kill predators and remove wild horses. The ranchers’ appeal has delayed the release of the Fish Creek wild horses and cost taxpayers tens of thousands of more dollars in transport and holding fees.

Borba’s appeal of the BLM’s Fish Creek Wild Horse Management Plan was filed last Thursday with the Interior Board of Land Appeals (IBLA). The appeal was filed nearly two months after the plan was first released to the public and the day after the roundup — in which 424 wild horses were captured and 238 were permanently removed from the range – was completed.

Wild Horse Education (WHE) educates the public about the plight of wild horses and burros and works to end the inhumane treatment of these heritage animals through a scientifically based management strategy in the wild.

Return to Freedom (RTF) is a national non-profit dedicated to wild horse preservation through sanctuary, education and conservation. RTF advocates for the redirection of funds used for roundups and holding to minimally invasive on-the-range management solutions. RTF founded the American Wild Horse Preservation Campaign in 2004.