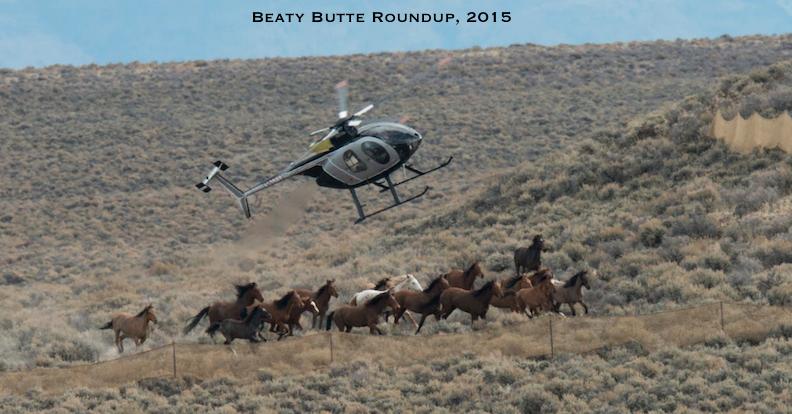 Largest Federal Roundup of Year Begins This Week in Oregon

Lakeview, Oregon (November 4, 2015) . . . . The Bureau of Land Management (BLM) has been forced to reverse its restriction on public observation for a massive wild horse roundup scheduled to begin today or tomorrow in Oregon.

The BLM had intended to allow the public to see just three days of the 10+ day roundup, but after receiving a demand letter on Monday from attorneys for both the American Wild Horse Preservation Campaign (AWHPC) and its founding organization Return to Freedom (RTF) threatening legal action if the BLM did not provide meaningful observation opportunities throughout the duration of the roundup, the BLM reversed course and informed the groups late yesterday that it will now allow the public to observe each day of the capture operation and will ensure that such observation is meaningful.

“We are pleased that the BLM no longer plans to violate our First Amendment rights to observe this large government operation that will cost taxpayers millions of dollars and deprive 1,400 federally-protected wild horses of their freedom,” said Deniz Bolbol, representative of AWHPC. “Clearly the public has a strong interest in the federal government’s treatment and management of wild horses and burros.”
Representatives and volunteers from AWHPC and RTF will be on site this week and throughout the roundup.

“Return to Freedom opened its doors in 1998 to a few dozen of these horses when they were permanently removed from neighboring Hart Mountain Fish and Wildlife Refuge. We will be there to bear witness to this tragic event,” said Shelly Martin of Return to Freedom.

Over 21,000 citizens have signed an AWHPC petition in opposition to the massive roundup plan. The operation will leave just 100 wild horses in this 400,000-acre (625 square mile!) public land area in southeastern Oregon known as the Beatys Butte Herd Management Area (HMA).

The groups say the roundup is being done to appease the Beatys Butte Grazing Association whose members receive taxpayer subsidies to graze their livestock on the public lands where the wild horses live. The BLM allows just 100-250 wild horses to live in Beatys Butte, while authorizing welfare ranchers to graze the annual equivalent of 1,700 cow/calf pairs there.

Return to Freedom and AWHPC were represented in this matter by the public interest environmental law firm Meyer Glitzenstein & Eubanks LLP.

Return to Freedom is a national non-profit dedicated to wild horse preservation through sanctuary, advocacy, education and conservation.  RTF is dedicated to modeling and advocating for viable solutions to manage wild horses and burros on the range to protect free roaming herds for future generations. Return to Freedom also operates the American Wild Horse Sanctuary and is AWHPC’s founding organization.

The American Wild Horse Preservation Campaign (AWHPC) is dedicated to defending America’s wild horses and burros to protect their freedom, preserve their habitat, and promote humane standards of treatment. AWHPC’s mission to preserve and protect wild horses and burros in viable free-roaming herds on public lands for generations to come is endorsed by a coalition of more than 60 horse advocacy, public interest, and conservation organizations.