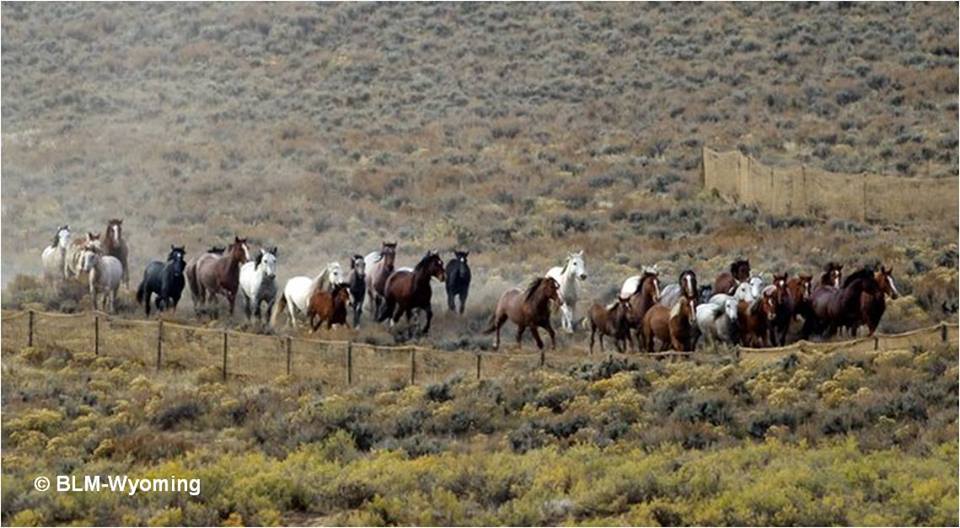 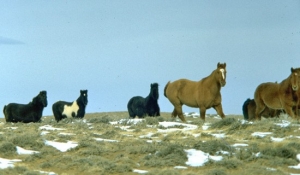 Wild horses: More than 1700 went to slaughter in Mexico, a report has concluded. © BLM

The Bureau of Land Management (BLM) has completed an environmental assessment as part of its moves to remedy shortcomings pinpointed by a judge over its 2014 roundup of nearly 1300 wild horses from Wyoming’s Checkerboard lands.

It has published a 41-page environmental assessment, together with a finding of No Significant Impact, for which it is now seeking public feedback. The BLM opened a 30-day comment period last Friday.

The documents were issued after horse advocates successfully challenged aspects of the roundup through the courts, with a judge ruling in March this year that the BLM violated the National Environmental Policy Act (NEPA) in its preparations for the Checkerboard muster.

A total of 1263 wild horses were permanently removed during the operation from public and private lands in the Adobe Town, Salt Wells Creek and Great Divide Basin Herd Management Areas (HMAs).

The three HMAs total about 2,427,220 acres, with 1,242,176 acres falling within the Checkerboard region – so-named because of its alternating public and private land parcels.

US District Court of Wyoming Chief Judge Nancy Freudenthal issued an order stating that the BLM violated the environmental act when it conducted the operation in the southwest of the state. He remanded the violation back to the BLM to “remedy the deficiencies”.

In the case, the American Wild Horse Preservation Campaign, The Cloud Foundation, Return to Freedom and photographers Carol Walker and Kimerlee Curyl contended that the BLM violated federal law by proceeding with the roundup in the absence of any environmental analysis and public participation, and by reducing the populations in the three HMAs below established appropriate management levels.

However, in the same decision, Judge Freudenthal denied claims that the BLM violated the Wild Free-Roaming Horses and Burros Act and the Federal Land Policy and Management Act.The judge ruled in their favor on this issue. He found that the BLM had authorized the roundup without analyzing any of the environmental consequences of a wild horse roundup of this magnitude, or reasonable alternatives to this action, as required by the environmental act.

The operation removed all of the wild horses from the private and public Checkerboard lands within the three HMAs.

The plaintiffs’ lawyer, William Eubanks, of the public interest environmental law firm Meyer Glitzenstein & Crystal, said at the time: “The court vindicated our concerns with BLM’s complete failure to analyze the impacts of this action on wild horses and the natural environment, as well as the agency’s failure to engage the public before pressing forward with this ill-advised decision.”

In 2013, the BLM entered into an agreement with the Rock Springs Grazing Association in which the agency agreed to remove all the wild horses from the association’s private lands on the Checkerboard and to consider, through the appropriate public process, zeroing out the wild horse populations in this area.

The advocates argued that the deal essentially turned the public lands over to ranchers who grazed livestock.

Judge Freudenthal, in his decision, said that BLM records showed the agency had decided it had “no choice but to remove all horses from the checkerboard regardless of what the impacts analysis would show”.

“As to NEPA, the court concludes BLM’s decision to rely on a categorical exclusion with no extraordinary circumstances was erroneous.”

The agency thus moved ahead with the roundup without fully considering all relevant factors concerning the unusual removal proposed, including areas of discretion available to the agency which might mitigate impacts.

This course of action failed to satisfy the agency’s obligations under the environmental act, he said, before ordering the BLM to correct the procedural deficiencies.

The judge said: “The mere fact that the end result (a removal of horses off the Checkerboard) would not change is unpersuasive, as it it does not encompass the full range of discretion available to the agency in conducting this particular roundup.”

Written comments should be received by December 21, and may be emailed only to blm_wy_checkerboard_hmas@blm.gov. Include “Checkerboard Removal EA Comment” in the subject line. Comments may be mailed or hand-delivered during regular business hours (7.45am to 4.30pm) to the BLM Rock Springs Field Office, 280 Highway 191 North, Rock Springs, WY 82901.

Gov’t to Get Rid of Wild Horses on Wyoming Checkerboard