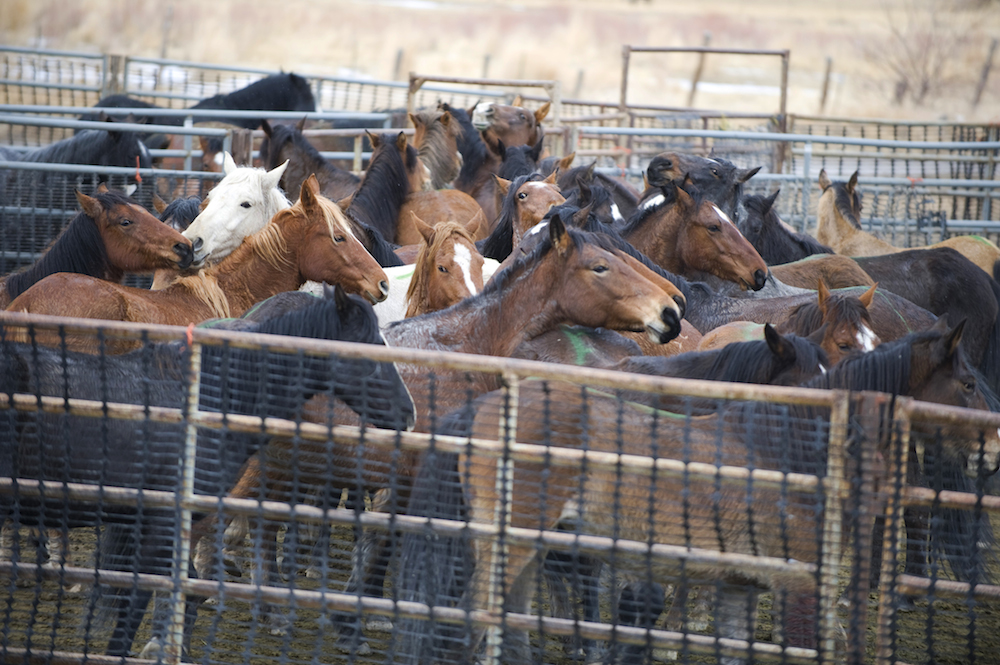 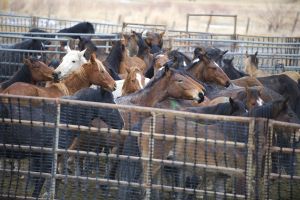 By Rebecca Moss, The New Mexican

Last summer, a photographer captured an image of a foal nursing from a mother whose large rib cage protruded, bone by bone, beneath her skin. The animals were among a band of slowly starving wild horses that had been corralled and removed from a range in Nevada by the federal Bureau of Land Management (BLM).

The heritage of wild horse herds is tied to the romanticism and legacy of the U.S. West. Under the Wild and Free-Roaming Horses and Burros Act of 1971, which declares the herds “living symbols of the historic and pioneer spirit,” they are entitled to federal protections from capture, branding, harassment and slaughter.

But how to manage the herds — keeping their numbers under control and their populations healthy — has been an issue debated for decades by horse advocates, ranchers and policymakers. Now the BLM says that without more significant population control, the horses will continue to starve to death in the wild, devastating the land where they roam until there is nothing left.

The federal law allows the BLM to remove certain numbers of wild horses and burros from public lands — to help maintain the health of both the herds and the range — and offer them for sale and adoption. But adoption numbers have dwindled, and the herd populations now exceed the capacity of the public range by more than 31,000 horses, many of which are held in captivity across the West.

As part of its fiscal year 2017 budget proposal, the BLM is asking Congress to “broaden opportunities” for the placement of wild horses. The agency seeks to remove the “wild” designation from thousands of horses deemed “excess” animals so they can be captured, trained and transferred to other federal, state and local government agencies to serve as work animals.

So far, officials say, 330 horses have been transferred to other agencies, most to the U.S. Border Patrol.

Horse advocates, however, oppose the plan, saying the BLM’s proposed new guidelines for wild horse management would “strip wild horses of the legal status that currently protects them from being sent to slaughter.”

Some also question the BLM’s emphasis on wild horse starvation, saying the horses are hardy animals and often can recover from a season with little food or water.

The BLM admits that it doesn’t specifically track starvation deaths, but it says the overall death rate for wild herds is 5 percent to 10 percent annually.

The BLM’s 2017 budget proposal also calls for the agency to launch a spay and neuter program — more aggressive and less costly birth control measures that are just as controversial as the transfer plan.

Barb Kiipper, a former citizen adviser to the BLM who runs a mustang training program in Northern New Mexico, said the invasive process for spaying mares is “horrific” and uncommon, and castration of stallions is also dangerous.

“What makes it so dangerous [is] when they wake up they are still scared out of their minds,” she said. “They thrash around, they can get hurt then, [and] nobody is able to touch them after surgery.”

She said this can lead to infection, tremendous swelling and, for older male horses, death.

A history of horse slaughter

The BLM long has struggled to maintain the herds under the Wild and Free-Roaming Horses and Burros Act, which sets a limit for the number of horses that public lands in each state can sustain, based on an assessment completed in 1971.

Herds double in size every four years, and adoption rates have dropped by more than 73 percent since 1995, according to BLM data. Population growth swelled to an estimated 47,329 wild horses and burros nationwide last year alone, an 18 percent increase over the previous year.

In New Mexico, this trend is reversed: In the 1970s, there were approximately 6,000 wild horses in the state, while the government estimates there are just 175 today.

Dean Bolstad, acting chief of the BLM’s Division of Wild Horses and Burros, said the plan to transfer the animals to other agencies is not intended to lead to their slaughter and in no way would deplete the wild herds. He called the transfer proposal “totally insignificant.”

He said the BLM also has adoption controls in place for the horses — required checkups for a year after an adoption — and a director must sign off on the purchase of more than four horses at a time.

But these precautions were put in place because wild horses historically have been vulnerable to indiscriminate slaughter. Before Congress approved the 1971 act, tens of thousands of wild horses were rounded up, killed and used to make pet food. And even long after the protections were put in place — in the 1980s and 1990s — adopters, including BLM employees, were reportedly taking in wild horses for about $125 a head and then selling them to slaughter for a profit.

In October, the U.S. Department of Agriculture’s Inspector General’s Office found that nearly 1,700 wild horses were illegally sent to slaughter between 2009 and 2012 through a “kill buyer” in Colorado. The inspector general said that in allowing the horses to be sold for slaughter, the BLM “failed to follow its own policy,” violating the federal law.

The Associated Press reported in April 2014 that horse advocates were incensed after the BLM rounded up a herd that had roamed for decades on federal land in Wyoming and turned the animals over to state officials, who later sold them to a Canadian slaughterhouse. The BLM defended the sale, saying the feral herd was made up of abandoned animals, not official wild horses protected under federal law.

Bolstad said there have been no reports of wild horses sent to kill buyers since the 2015 report.

The American Wild Horse Preservation Campaign issued a news release in early February, “calling foul” on the BLM’s new proposal, saying that it marks a departure from the Obama administration’s commitment to protecting wild horses from slaughter and that it indicates an “increasingly dangerous direction” for the nation’s wild horse program.

“The language is so broad, it opens the door,” said campaign spokeswoman Deniz Bolbol. She said the new guidelines would allow the BLM to “wash their hands of any legal requirements to protect the horses.”

But the BLM insists the new guidelines would only streamline the process for creating work animals for other agencies.

“There is a key word in the proposed legislation that says for use as ‘work animals’,” said Tom Gorey, a senior public affairs specialist for the BLM.

He said the cost of keeping excess horses in holding pens off the range is a strain on taxpayers, costing $49 million annually. With 10,000 new foals born in 2015, the burden to federal ranges and holding facilities only continues to grow, “faster than we are able to remove them.”

To control wild horse populations, Bolbol advocates the use of the porcine zona pellucida vaccine, or PZP, a birth control injection given to mares that blocks fertilization for a year.

Permanent sterilization methods change the nature of the horses, she said. “You don’t have wild horses anymore. You have their bodies, but they are … domesticated.”

Sophia Krajewski, an equine veterinarian in Santa Fe, agreed that sterilizing a horse “totally changes their attitudes.” While spaying a domestic mare is “extremely difficult” and rarely done, removing a domestic stallion’s testicles, or gelding, is more common and safe. And the reason it’s done, she said, is to make a horse “less likely to bite, less likely to be aggressive — they are much more manageable.”

Bolstad countered that current birth control methods for wild herds are too short-lasting.

“The activists don’t really want us to have any alternative rather than to allow the horses to reproduce [naturally],” he said. “That’s an irresponsible position.”

Herman, like others, fears that if wild horse protections are removed for thousands of animals on the range, slaughter “is always a possibility that looms.”

Human consumption of horse meat is rare in the U.S., and the last slaughterhouse on American soil closed in 2007. But an estimated 150,000 American horses are still sent to slaughter each year, according to the American Society for the Prevention of Cruelty to Animals. Congress has so far failed to pass legislation to prevent the sale and transport of horse meat, but such a measure is pending.

Not everyone opposes the idea of horse slaughter to manage the wild herds.

Dan Key, a council member of Back Country Horsemen of New Mexico, says he sees slaughter as utilitarian alternative to keeping excess horses in corrals, which he equated to “sending someone to prison for something they didn’t do.”

“I’m not opposed to slaughtering horses for meat,” he said. “We do it for cows, we do it for goats and we are one of the few countries that don’t utilize their meat source.”

But Bolbol says slaughter, as a tool or a loophole, undermines the emotional attachment Americans have to wild horses.

“Our civilizations wouldn’t have been built without them,” she said. “We yearn for that wildness … [but] slowly, we obliterate all that is wild.”