Chronicle of the Conger HMA Roundup 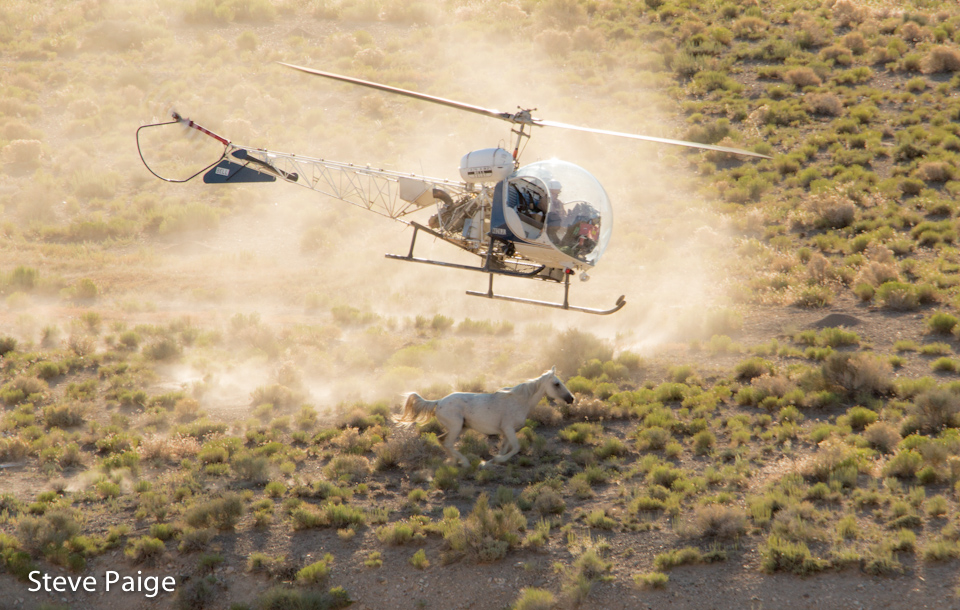 While Americans celebrated our historic independence from Great Britain, our iconic wild horses, symbols of freedom, are running for their lives — straight into traps in the Conger Herd Management Area (HMA) in Utah.

Day One, July 1: The BLM began its Conger helicopter drive-trapping operations on July 1st, rounding up 101 wild horses in its first day with one death occurring at the trap panel. 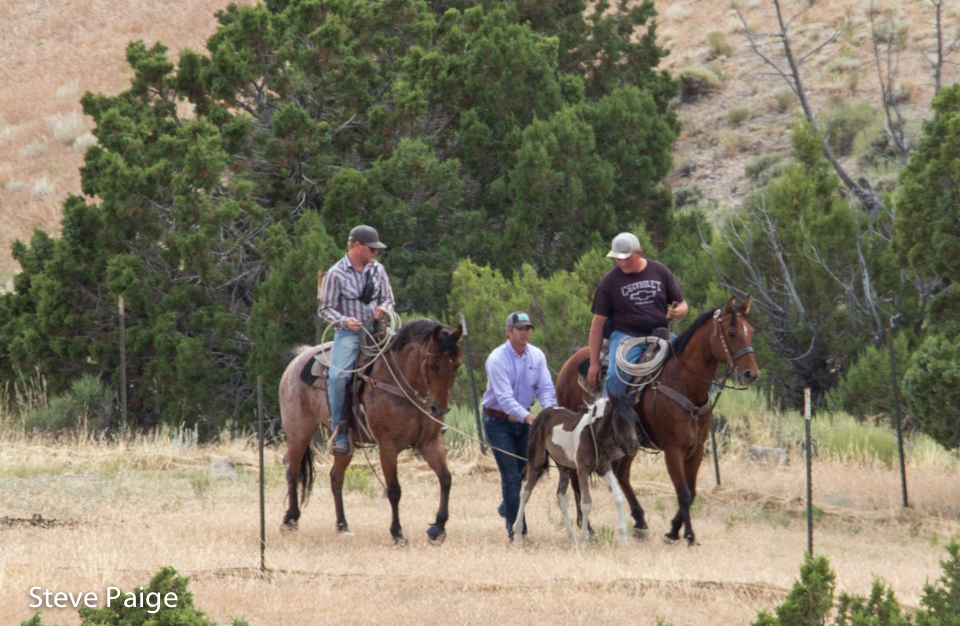 Young nursing foals could not keep up. 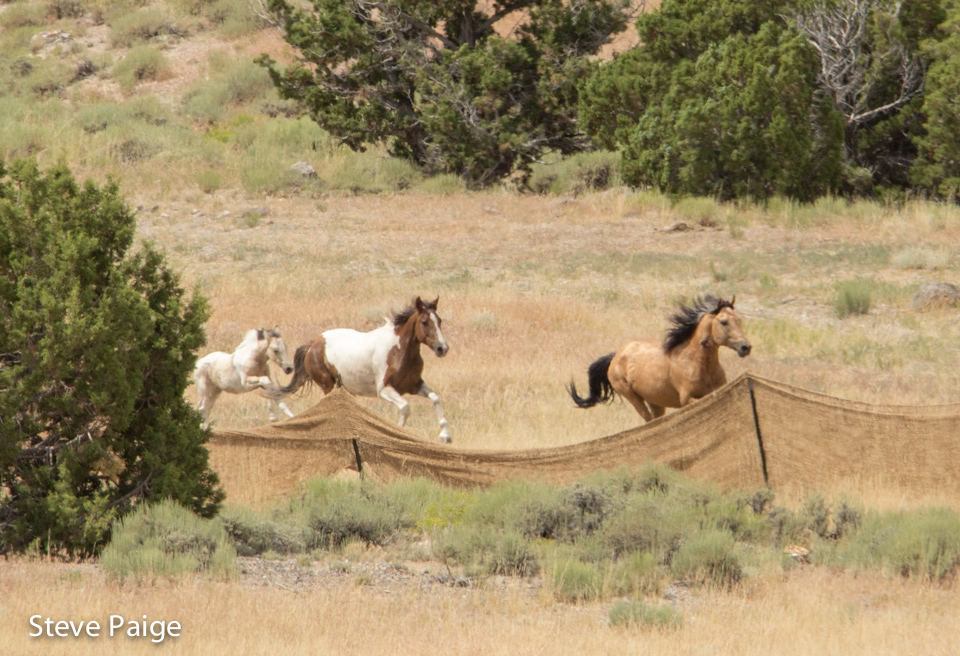 July 2, 2016- Day 2 of the Conger roundup: Another 41 horses were gathered.
This beautiful Pinto mare broke her neck on the trap panels and before they could remove her body from the trap area they continued to push in another 7 horses. The BLM said there was no communication between the pilots resulting in the next group of horses being pushed in and running over her body. The first group of horses were extremely pressured and the Judas horse was not released until the second group of horses came in towards the funnel to the trap and they ran right over the now dead mare. BLM said the trap site will be moved after 2 deaths in 2 days. ( Steve Paige observer)

We see so much more wrong with this trap than just the location. RTF contacted Gus Warr (BLM, Utah State Lead) and discussed shortfalls of the trap set up, the amount of very young nursing foals and the heat. Warr stated that there were mistakes and it will be addressed .

Day 3, July 3: Another 42 wild horses gathered today. A young foal had to be euthanized after suffering a severe fracture in the trap pen while with its panic stricken mother. Making this the 3 deaths in 3 days. 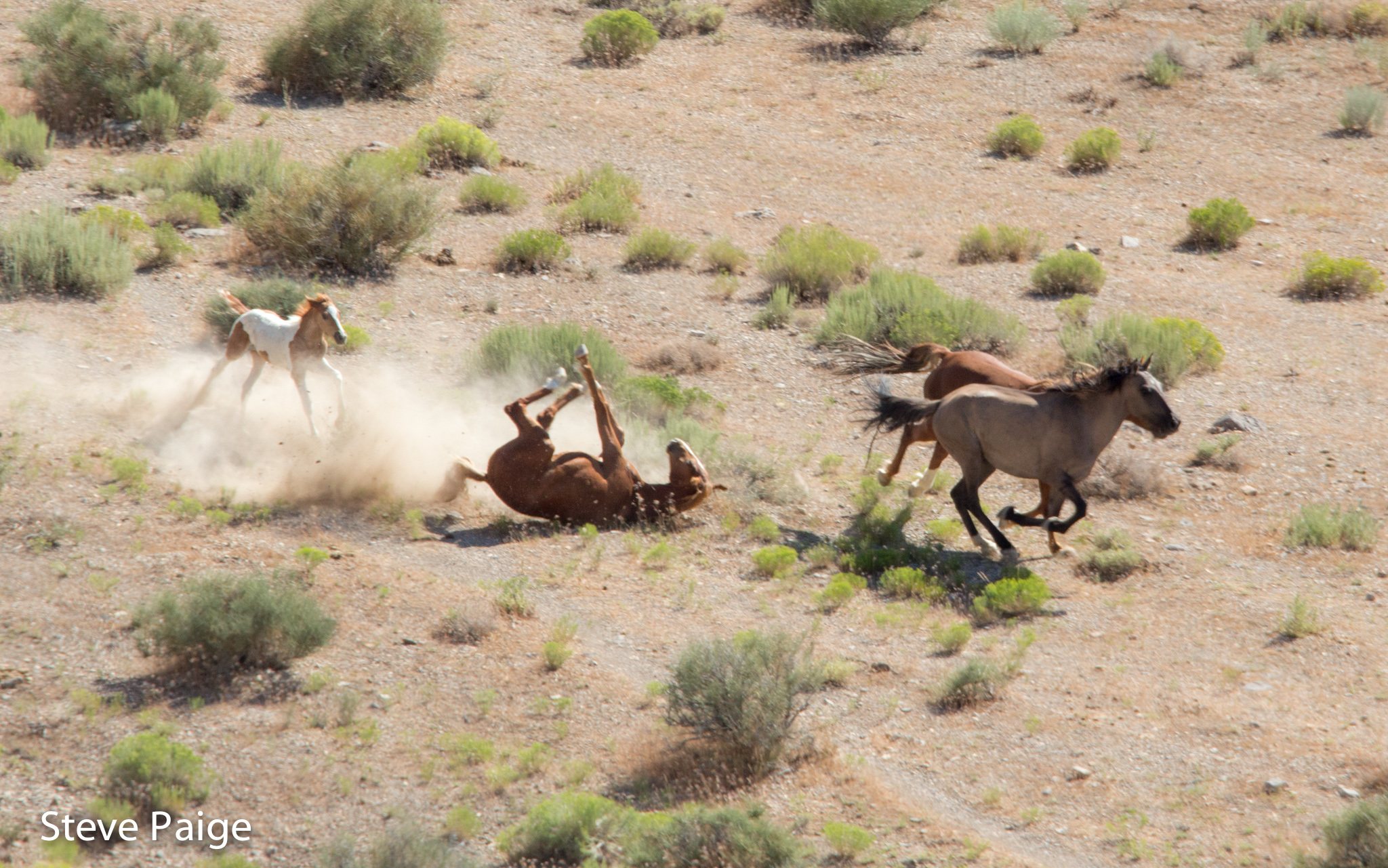 Heat, pressure and adrenaline at high speeds. It hurts to witness these innocent horses run for their lives only to loose so much….even for those who go back on the range, it will never be the same.

One of 3 horses making an escape through the trap jute revived and made their way up the mountain. 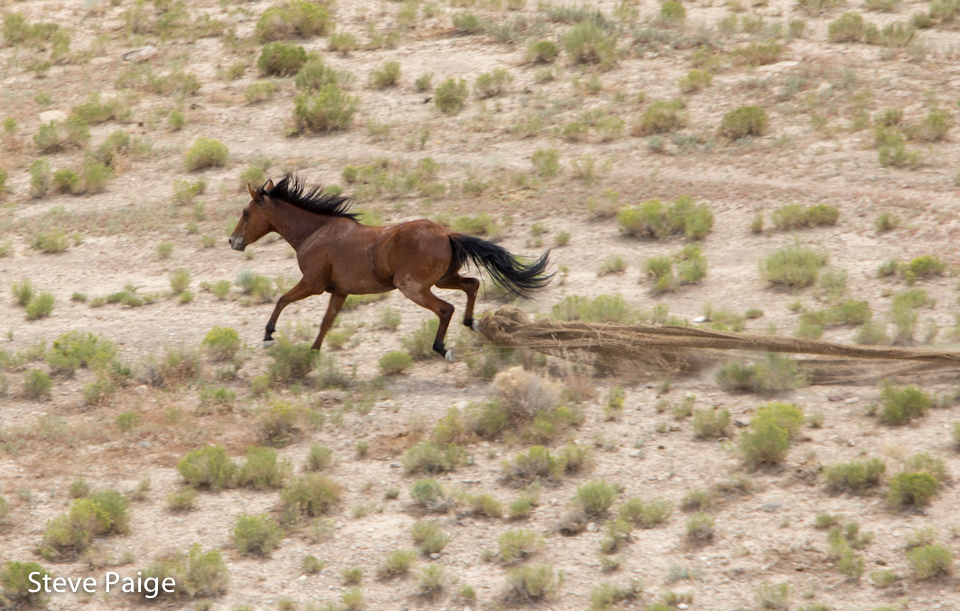 Day 4, July 4: In a twist of irony, July 4 marked Day Four of the planned eight-day roundup within the Conger HMA. By the end of Day 5, four horses have died and 185 horses were removed from the range. The Conger roundup ended today, with 12 more horses caught, making the total 257. These deeply bonded family bands and stallion bachelor groups have lost their families and freedom – forever.

Casualties: The trap site was poorly located and the trap looks badly designed with panels just under 6 feet tall and extremely small sorting pens. Forcing wild horses into a trap is never their idea and the configuration, circumference, size of the alleys, catch pens and gates is critical.  It takes a lot of pressure to force a herd into a trap, without the right amount of distance for  the herd to land, the inevitable can happen- and it did, over and over at this ill fated roundup. Three mature mares with foals by their sides died senselessly as they ran full speed and crashed into an unyielding steel panel, breaking their necks and dying instantly. One foal had to be destroyed due to a fracture sustained when his panic-stricken mother kicked him in the jaw. One mare was killed instantly while her nursing foal and yearling were by her side. 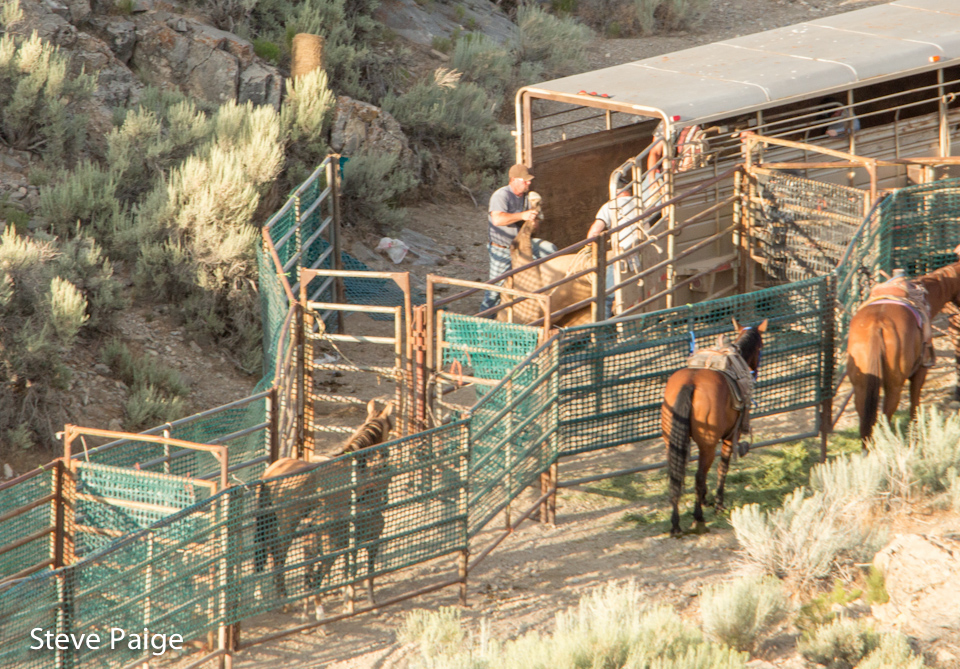 This beautiful dun mare died with her nursing foal and yearling looking on. 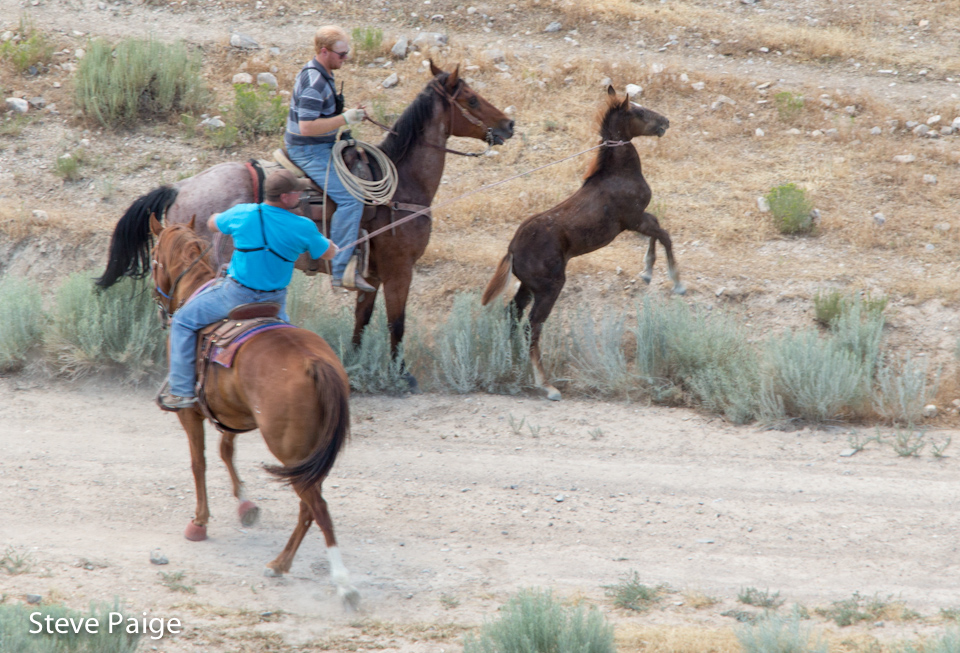 This beautiful filly above had her own ideas about the trap.

One young nursing foal was found the next morning having wandered into the trap after the roundup separated him from his family. One foal was found running alongside the BLM trucks at dawn, lost; his fate is still unknown.

Day 5, July 5th: Another 21 wild horses gathered today. Including a very young foal. The BLM commented how young the foals have been at this roundup and suggest that any future roundups at Conger should be delayed until August to give them more time to grow.

Speaking of foals, RTF staff passed by a stray foal on the way to the trap site in the early morning. Two 2 days ago another stay foal walked into the trap site and was captured. 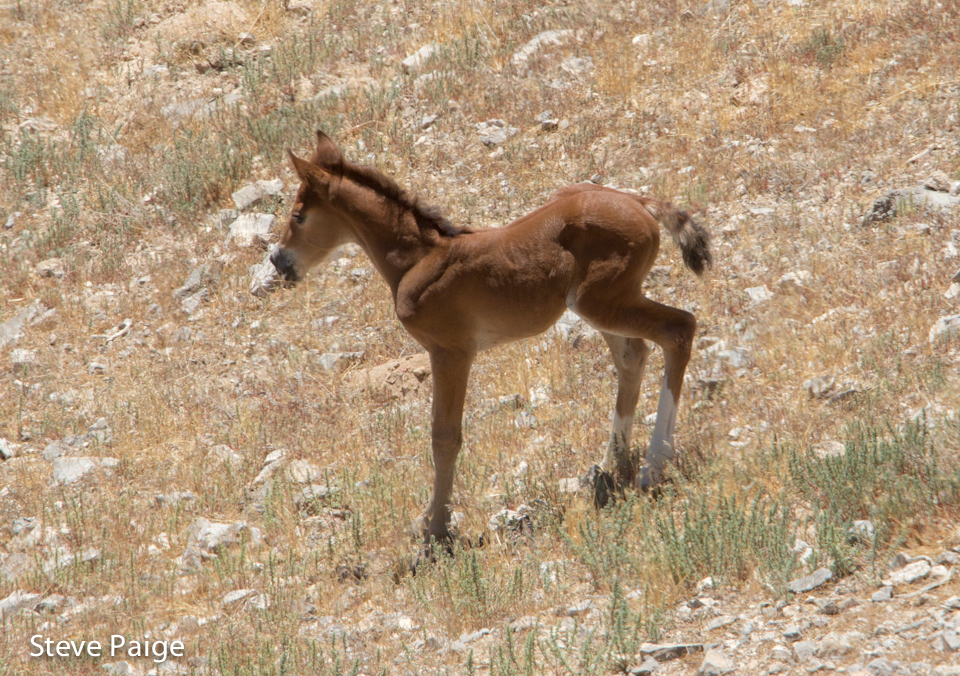 “Just how many foals get left behind in this helicopter driven madness?” Steve Paige 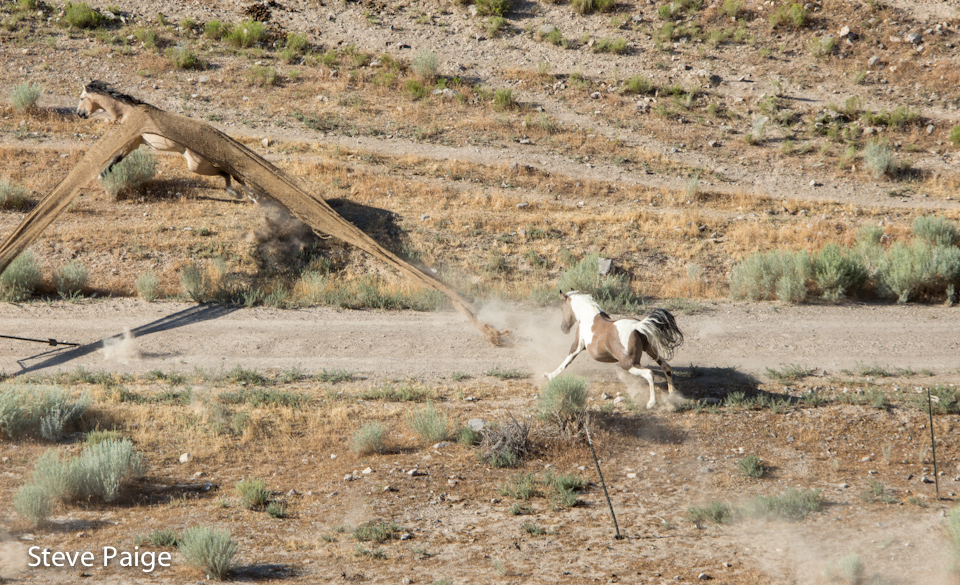 Day 5: Four stallions escaped after getting caught in the jute funnel. 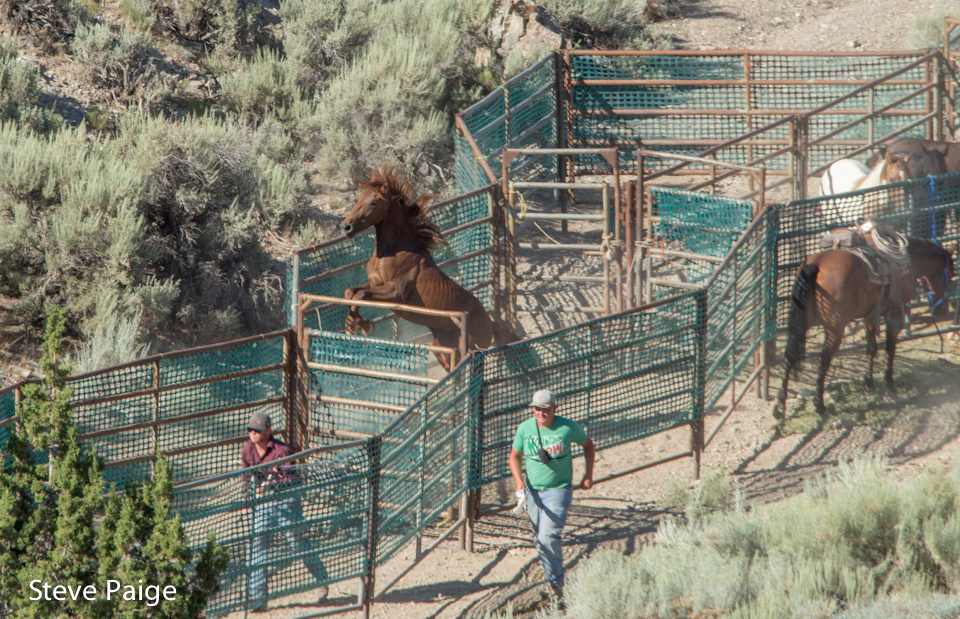 Day 5: This stallion was unsuccessful in escaping the trap.

The Bureau of Land Management (BLM) plans to capture approximately 250 wild horses from both the Conger and nearby Frisco HMA to achieve a research population of approximately 100 animals in each area, some being fit with radio collars and global positioning system tracking devices to provide data on free-roaming horse locations and movement to help the BLM improve understanding of herd behavior.

A foster home was found immediately by BLM staff for two nursing foals separated on the range from their family. They are reported to be in good care and doing well. 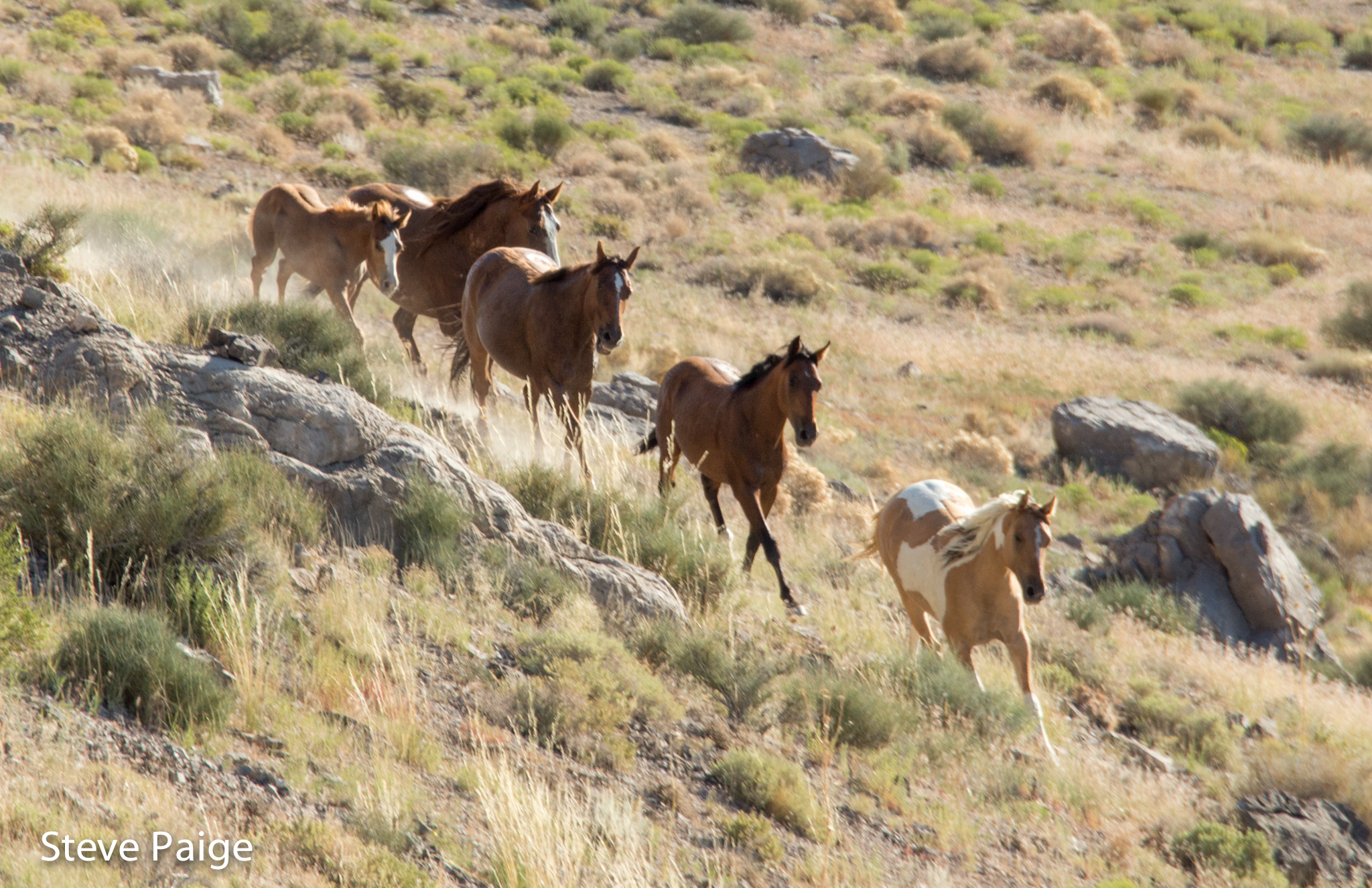 Day 6: This family band above was captured, separated, and transported (see below). 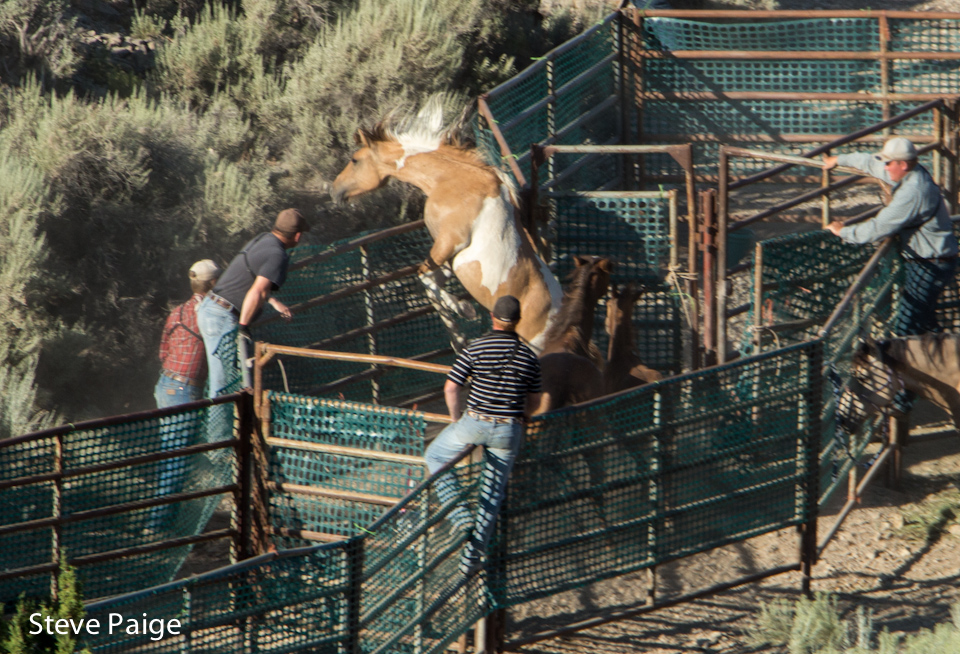 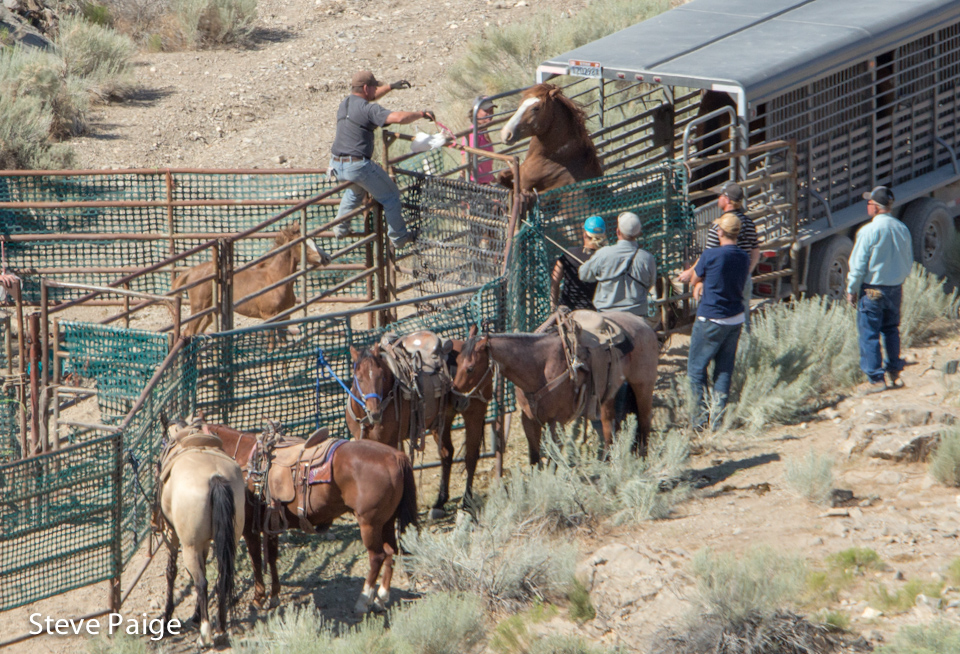 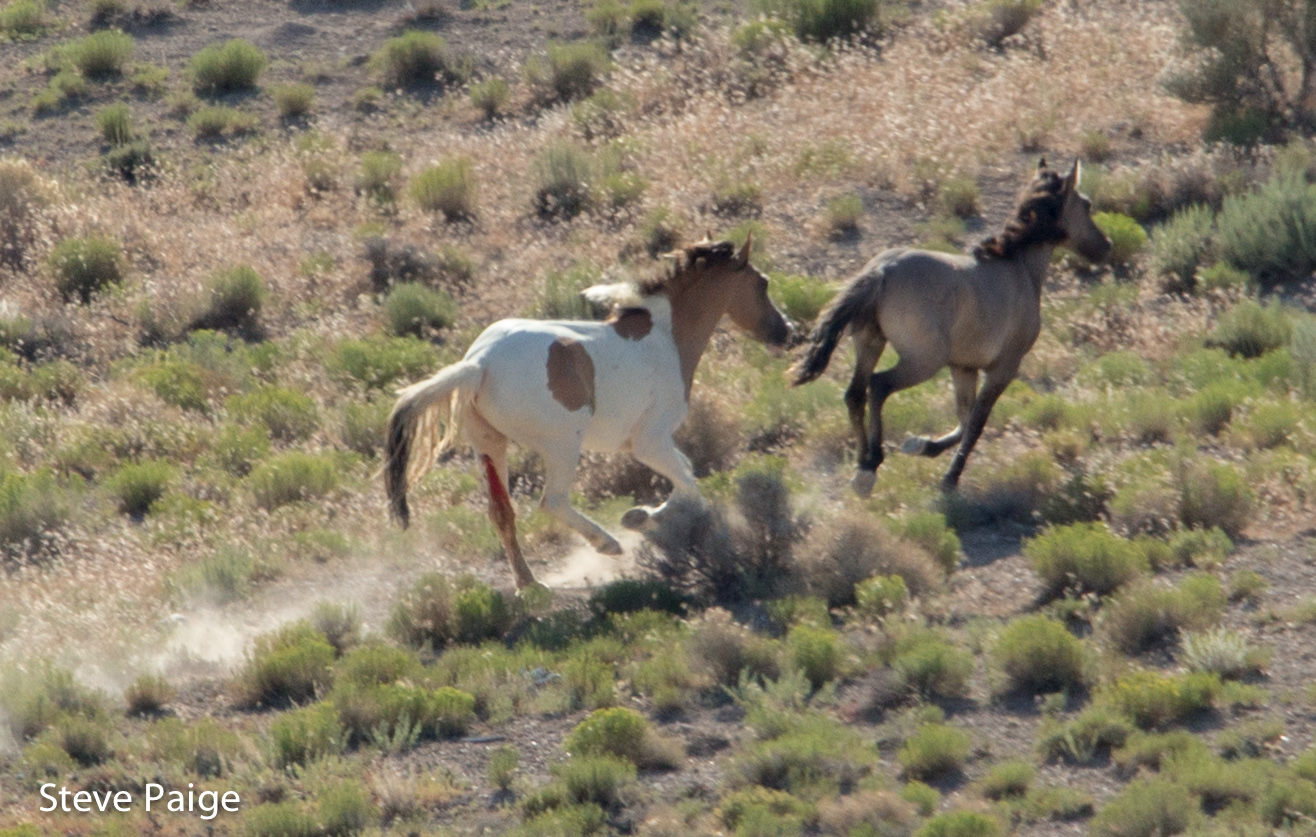 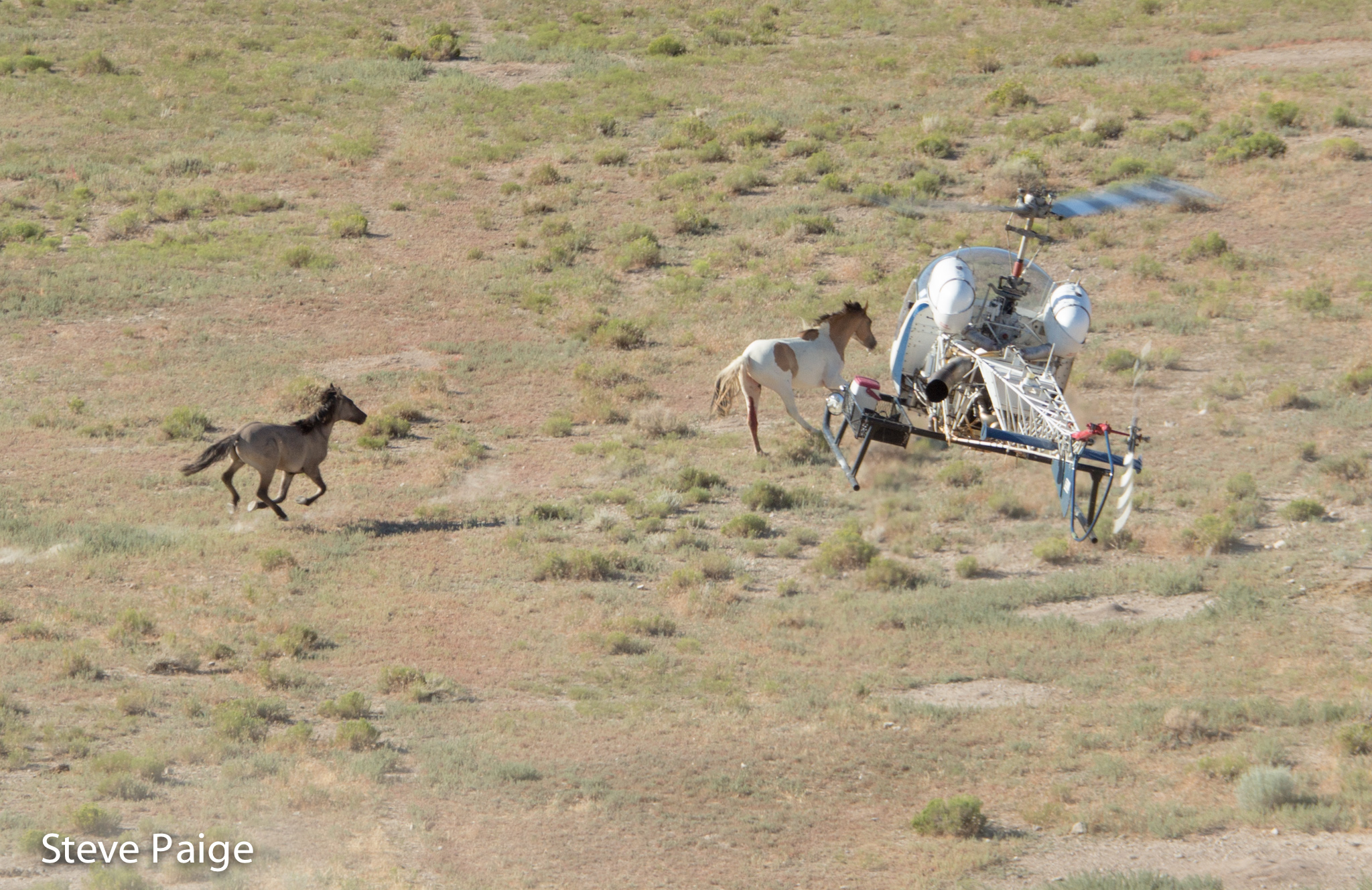 BLM State lead, Gus Warr stated that there were more nursing foals than usual for July and many were unable to keep up with their family bands. BLM wranglers “did their best” to find and bring in lost foals. Gus Warr told RTF that any future roundups at Conger should be delayed until August to give foals more time to grow.

You can find daily reports from the BLM by CLICKING HERE.

“Devastating to witness the senseless destruction of wild horse family bands that came together from natural selection. So much interference and disruption to our iconic wild herds. I wonder why a country that prides itself on “family values” would not do more to keep the family bands together.” —Steve Paige

“Stop experimenting on our wild horses and burros and start experiencing them.” —Linda Salinas

We are concerned and insulted that the BLM is spinning concepts back to the public and the media to cloak the ongoing and systematic removals of wild horses from public lands — research is the new buzz word to push things through. Without a well thought-out conservation plan, there is no real direction for our wild horse and burro program. RTF prioritizes natural selection and the social behaviors of a balanced herd.

Return to Freedom is on the ground both at the Conger HMA and the Frisco HMA for the duration of the roundups. Thanks to Steve Paige for bearing witness and reporting from the field for Return to Freedom.

You can use your voice: Respectfully, tell the BLM and your Representatives in Congress that you want wild horses and burros managed on their ranges.

The BLM has the technology and they need to use it NOW. Tell BLM to implement the proven and safe native PZP fertility control vaccine and start managing wild horses and burros on the range. Roundups are costly, tragic, and permanent. They are not the solution. Stop the insanity.

We will continue to expand this post throughout the duration of this event. If you can, please help support our work: Sanctuary. Education. Advocacy. Conservation.