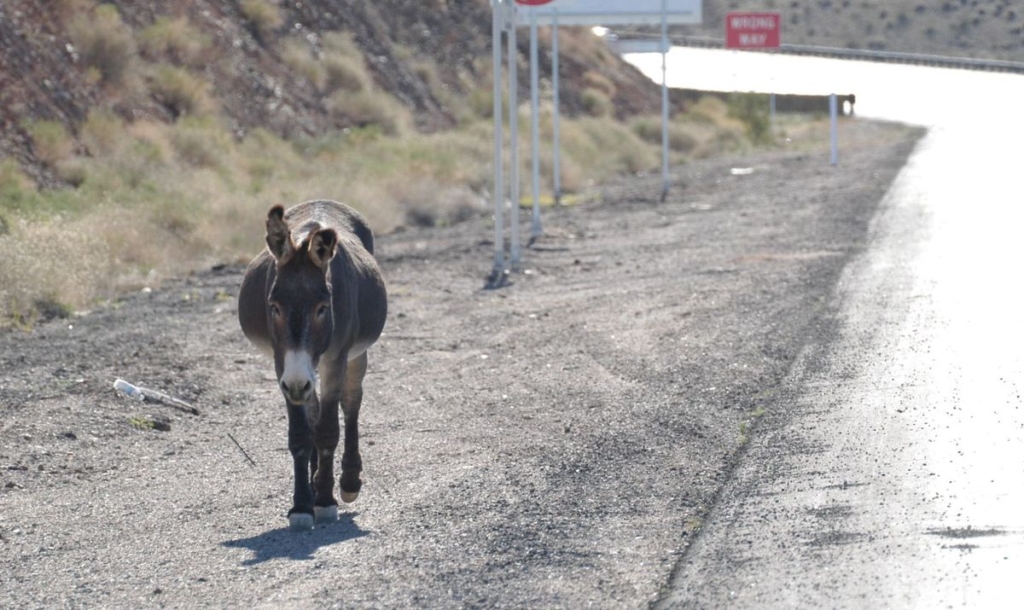 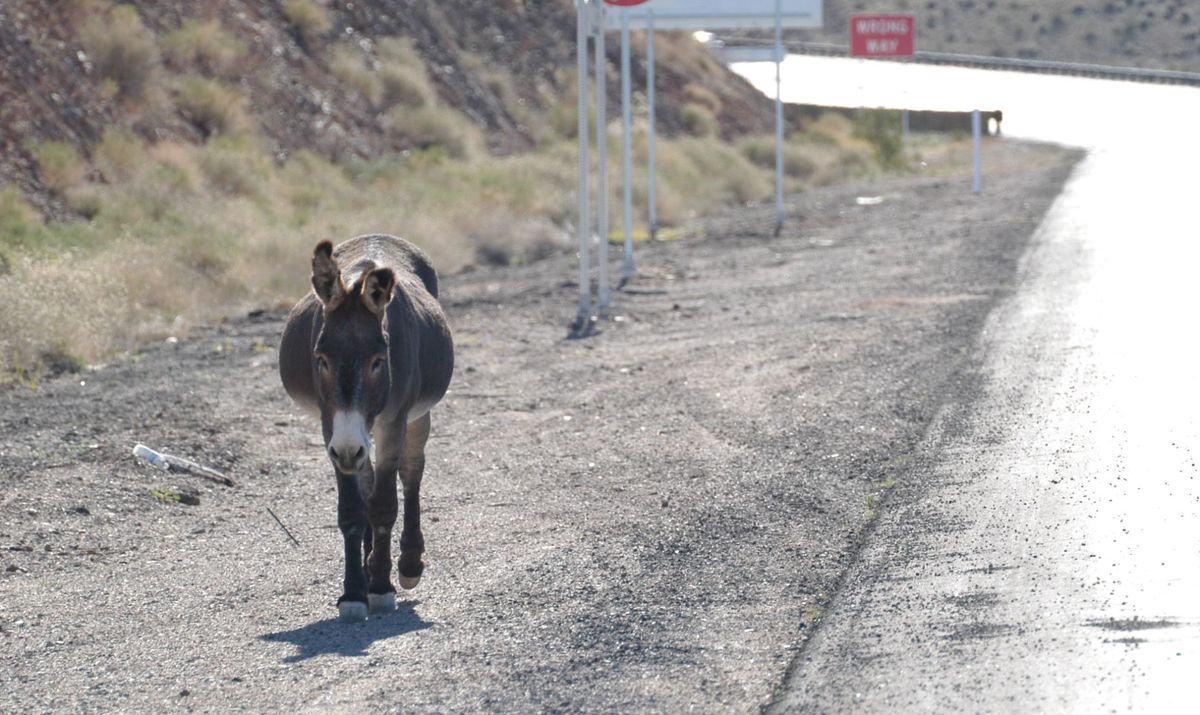 As published by the Yuma Sun

The Yuma office of the U.S. Bureau of Land Management is in the midst of an “emergency gather” of wild burros and horses from desert areas around Yuma County, a small piece of the response officials say is needed to address the threat posed by their overpopulation of the desert.

The problems related to free-roaming burros in the county’s northern reaches have been known for years, and this roundup is being done at the request of Yuma Proving Ground, which has reported an increase in collisions and near-misses between cars and the equine animals on Highway 95 north of Yuma, where rapid breeding allows the herds to grow by 15 percent to 18 percent a year.

“With these rains we’ve had up north it is pulling them away from the highway a little bit” in the past week, said John MacDonald, manager of the BLM’s Yuma field office, but the fear of a person dying from a vehicle-burro collision is always present. On average, about 20 burros a year are hit on the roads around YPG.

“We’ve gotten complaints from Dome Valley and also around Bard about the burros wandering into their fields, especially when they have produce in them. And the burros are contaminating the fields, and they can’t harvest within any obvious signs of burro in their fields,” he said.

Their incursions into the Imperial National Wildlife Refuge to drink from the Colorado River also lead to destruction of riparian vegetation.

John Hall, rangeland management specialist for Yuma’s BLM office, said the current gather so far has netted 34 burros and nearly as many horses, 31.

Both species are more mobile at night during the summer months, so that’s when drivers need to be especially careful. And horses, due to their size, can be even more dangerous to collide with.

“Horses were one of the big drivers for this whole thing,” he said. “Pretty much every year, I have the ability to go out and trap burros, as nuisance animals, but I’ve been working on this for about five years, to actually get the horses to go through. They tend to be a little more controversial with the public.”

They have been particularly damaging to YPG’s Kofa Firing Range on Aberdeen Road, he said. “They’ve been causing a lot of damage to the buildings, they’ll break water pipes, whatever they need to do to get water. That’s why the horses have been a big issue. We’re really grateful we’ve been able to actually start removing these ones and getting them to a safer place,” Hall said.

Most of the burros he’s netted during this drive have been on the larger side, he said. “We only transported, one small female, I think the rest of them have either been mature or yearlings,” he said. The horse roundup has been contracted out, but Hall said he has been handling the burros himself.

The rounding up was set to start again after the Labor Day weekend.

“They get used to going in and out of (the traps) already. What’s happened is we’ve caught the easy ones, we’ve caught the ones that will go in immediately. Now we’re down to the four or five animals that are more difficult to catch,” Hall said. “So it takes a little more time and a lot more patience.”

While horses are a prime motivation for this current roundup, due to sheer numbers burros are the bigger problem. Hall said that at about 150 he has the state’s largest herd of BLM-managed wild horses. They’re within the Cibola-Trigo Herd Management area, which covers most of the area between the Colorado River and Highway 95 from Imperial Dam on the south to Interstate 10 on the north

He estimates there are about 600 to 700 burros roaming through the same million-acre region.

Charlie Bush, owner of the Fisher’s Landing resort at Martinez Lake on the south end of the wildlife refuge, said in the summer, herds of up to 30 burros cross his property a couple of times a day to drink from the river, and he had to pull three dead ones off the road after they were hit by vehicles.

“The last couple of years it’s just been getting worse and worse and worse. And there’s been so many people hitting them on the road, they’re causing traffic accidents. And I believe the BLM is supposed to be taking care of them somewhat,” he said, but doesn’t seem to be doing anything.

“They’re getting onto people’s property and eating their plants. They try to raise a garden but they can’t raise a garden because the things just destroy everything. And they take all the habitat from the deer and the bighorn sheep,” he added.

MacDonald said his office is doing what it can with the funding and authority it has from the federal government, but the effects have been limited. The last large-scale gather was in 2012, bringing in about 300 burros.

Relatively easy to catch, burros who wander into the boxlike traps set for them with hay, water or other enticements before the fourth wall slams shut are taken to the BLM’s Wild Horse and Burro Holding and Training Facility in Florence, where some will be trained by prison inmates and most will be made available for adoption.

“Nationwide, it’s easier to adopt out burros than wild horses. No. 1, I think is they’re cuter,” MacDonald said. “Two, you can put them in your backyard where you can’t do that with a horse. Around here people can use them for packing or hiking.”

About 12,000 wild burros have been removed from Arizona’s wilderness areas since the act was passed, according to the BLM website.

They are protected from harm under the federal Wild Free-Roaming Horses and Burros Act of 1971, which refers to both animals as symbols of the Old West. But the act as amended also says there should be no more than 1,676 wild burros on Arizona’s public lands, while the BLM estimates there are now 5,000.

The population is highest in Mohave County, where the BLM is considering a small pilot program to inject female burros with contraceptives through shooting darts at them. BLM spokesman Lee Tucker said the “fertility management program” could be expanded to Yuma County.

“There are a number of other studies and methods being considered. New research is expected to lead to better management tools. But even if these new tools were available today, it would take some time for populations to come into balance with what the land can support,” he said.

Pat Barber, supervisor of the Region 4 office of the Arizona Game and Fish Department in Yuma, said the federal law gives BLM control of the burros, while his agency must deal with the effects uncontrolled burro breeding has on the habitat for other wildlife and plants.

He said his agency has put a public records request in to BLM about the size of the burro population and the effect it’s having, as it looks for its own solutions to the issue. “From a science perspective we’re pretty certain what’s happening and what’s going to happen with unchecked burro populations, but we’re trying to assess whether we have the data to definitively prove that,” he said.

He said they’ve also been meeting with BLM and other officials from involved agencies around the state to look for ways to address the problem because on the national level, the difficulty of adopting out wild horses is tying up resources that could be going toward adopting out more burros.

“We’re trying to focus more on burros because that’s Arizona’s big issue. And there aren’t that many in holding, they adopt out a lot easier, so we’re looking for a way we can leverage some of the resources in Arizona and work with the state office to fix our own problem,” he said.

More information about the BLM’s burro adoption program in Arizona is available at www.blm.gov/az or by calling the agency’s Arizona State Office at (602) 417-9421.