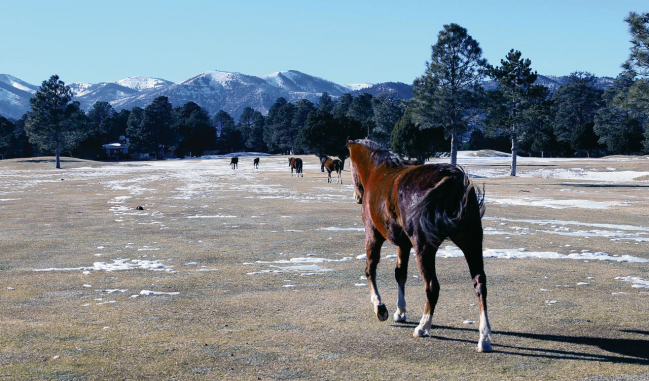 An annoyed and frustrated 12th District Judge Dan Bryant tried to conduct a hearing on the Alto, N.M., horse case Wednesday in which attorneys for both sides attempted to make their cases via glitch-plagued long distance phone lines.

After brief arguments, interrupted repeatedly by dropped connections with one or both lawyers, the judge ended the proceeding by saying he would try again at 2 p.m. Thursday with everybody present in his courtroom.

“No phone appearances,” Bryant said. “I want all the lawyers here tomorrow.”

The hearing had been requested by Albuquerque attorney Steven K. Sanders, who represents the Wild Horse Observers Association. WHOA sued on Aug. 29 to have the Alto herd legally declared “wild horses” and to prevent the New Mexico Livestock Board from selling or relocating them.

With word circulating of Livestock Board plans to sell the horses next week, Sanders sought an emergency order to stop them. More than 30 concerned citizens were in the courtroom to show their support for bringing the herd back to Lincoln County

The Livestock Board took the 12 mares and foals last month from a private landowner near Alto who had penned them up and complained they were a nuisance. Their seizure produced a local outcry, and advocates of the free-ranging herds quickly organized to get them back.

Their efforts include a legal effort in partnership with WHOA, which has been fighting a nearly identical two-year-old case involving horses wandering in the Placitas area near Albuquerque. Sanders is WHOA’s lawyer in that case too.

Sanders and co-counsel Freda McSwane of Ruidoso had not tried last week to get an emergency order to prevent the sale of the horses because of reports that the Board had promised to return the herd to Lincoln County while its legal status was being deliberated. That turned out to be untrue.

Sanders told Bryant during Wednesday’s hearing that he was informed late last week that the Livestock Board had posted public notice that it planned to go ahead with the sale on Monday, Sept. 12.

He said WHOA had been forced to ask for Wednesday’s hastily-called hearing to stop any sale before the court could consider WHOA’s argument that the Livestock Board had no legal right to determine the herd’s future.

Asst. Atty. Gen. Ari Biernoff told the judge that Sanders had failed to meet the technical requirements for obtaining a temporary restraining order against a government agency.

With no formal motion filed, no bond posted and none of the other formalities properly observed by WHOA, Biernoff said, “all we have is the plaintiff raising its hand and saying they were very concerned that something bad is going to happen.”

He also questioned whether it was proper for Bryant to hear the case at all while the same legal issues were already in play in the Placitas case, in which a hearing was scheduled later Wednesday afternoon before 2nd District Judge Valerie Huling. Biernoff called the Alto case “highly improper” and “an end run around Judge Huling.”

But Sanders argued that the horses over which the Placitas case was originally fought had long since been relocated, and with the herd gone the entire case might actually end up being dismissed Wednesday. By contrast, the Alto herd is still in the Livestock Board’s custody, he said.

Biernoff confirmed that the Livestock Board still has the herd, but under questioning by Bryant he admitted he didn’t know whether the Board had scheduled a sale for Monday, Sept. 12, as Sanders said he had learned.

Bryant said that was a poor answer. But he said he couldn’t hold a proper emergency hearing for a restraining order without better prepared papers and arguments from both sides.

The judge gave Sanders until 4 p.m. Wednesday to amend WHOA’s original lawsuit to include a formal request for a temporary restraining order, properly served on the attorney general’s office.

The judge said he would also hear any further arguments from Biernoff over whether he could hear the Alto herd case while the Placitas case was still alive.

Bryant said if he issues a temporary restraining order barring sale of the Alto herd, there will automatically be another hearing 10 days later to determine whether that order should be continued.

He also said he would expedite the case on his docket so that a trial will be held within 90 to 120 days if the case isn’t already resolved by before then.