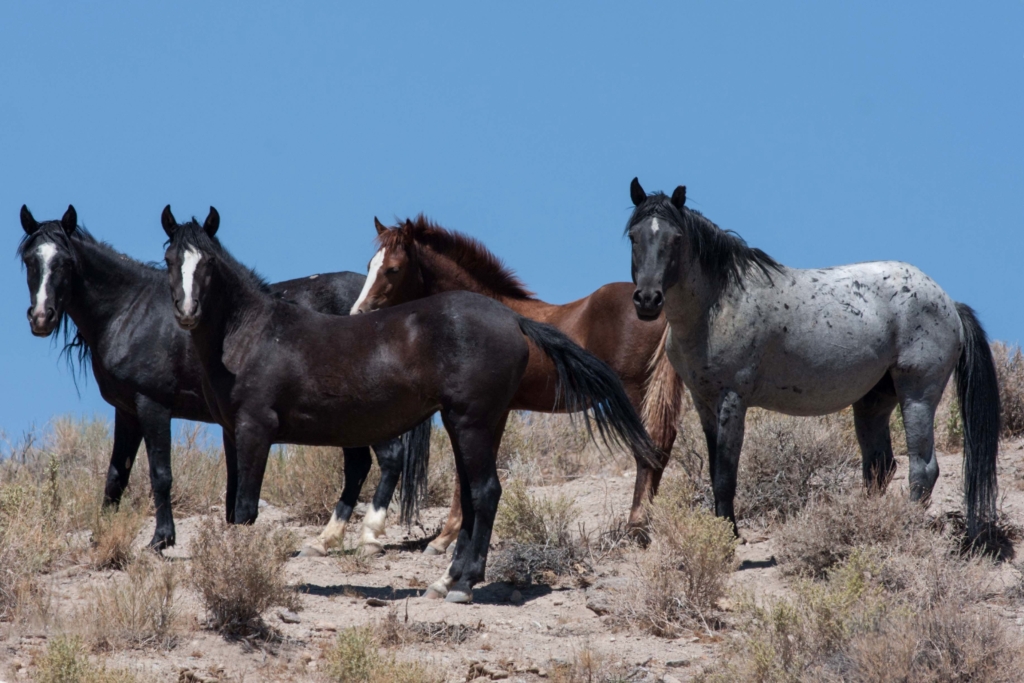 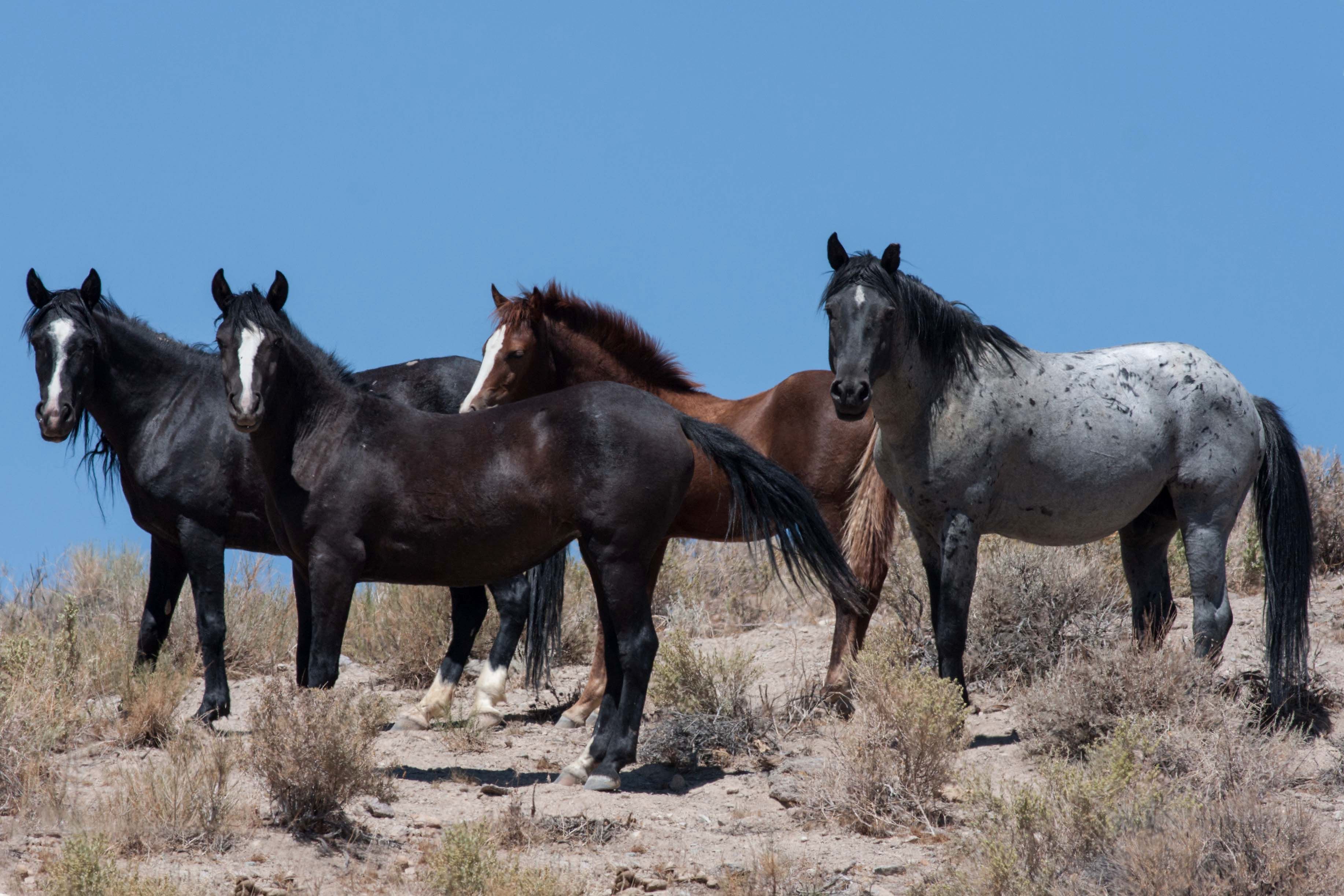 Nevada Bureau of Land Management officials on Thursday told the BLM’s National Wild Horse and Burro Advisory Board that they remain concerned about the impact of ongoing drought conditions on horse and burro populations more than 2.5 greater than the BLM-set appropriate management level.

In 2015, 1,640 horse and burros were rounded up in Nevada. BLM plans to capture 803 there this year, “primarily due to water issues, forage issues,” said Alan Shepherd, Wild Horse & Burro Program state lead for the Nevada BLM.

In some areas, he said, photographs show upwards of 40 to 100 horses waiting to drink. Near Elko, Nevada, where the two-day board meeting is being held, almost all water sources are located on privately owned land. Were water certificate holders there to fence off their property, “700 to 800” horses would not have access to water.

BLM’s state officials also said that lack of water combined with a growing horse and burro population has increased concerns about their presence on privately held land and increased safety concerns along highways.

About 40 percent of the state remains in a state of drought, now in its fifth year.

“Horses are going anywhere and everywhere, at this time, looking for food and water,” Shepherd said.

Wild horse advocates — including Return to Freedom — object to how BLM calculates its population targets, how the agency favors cattle over federally protected free-roaming horses and burros in grazing allocations, and how BLM returns time and again to roundups over humane, on-range management, like proven and safe fertility control vaccines.

Nevada is the epicenter of the ongoing battle over the fate of wild horses. The state is home to more than half of the nation’s wild horses and burros, with a March 1 population estimate of 34,531 horses and burros that does not include foals born in 2016.

Nevada’s appropriate management level (AML), or the number of horses and burros BLM says can graze without damaging the range, stands at 12,811.

Of Nevada’s 83 herd management areas or HMAs, 72 are over AML, and many of those have horse or burro populations 3 to 10 times over AML. The 83 HMAs do not include those partly in the state managed by California BLM or National Forest Service wild horse territories.

The BLM employs nine wild horse and burro specialists in Nevada — less than half of the number it had in 1990, Shepherd said.

Statewide, Nevada BLM has granted 677 grazing permits and leases that account for nearly 2 million animal unit months (ATM), defined as the amount of forage needed to sustain one cow and her calf, one horse or five sheep or goats for a month.

State BLM officials said as many as 25 percent of those AUMs are in directed or voluntary non-use because of range degradation caused by horses and burros and / or drought conditions.

Among Nevada horses and burros rounded up, 110 were adopted in 2015 and 100 more so far this year, some of them by other federal and state agencies, like the U.S. Border Patrol and California Department of Fish and Game.

No “large-scale” roundups are planned this year, Shepherd said, because of agency-wide budget limitations and focus on sage-grouse habitat and research projects. Most will be of less than 100 horses — “just to take some of the pressure off,” he said.

Dean Bolstad, division chief for the Wild Horse & Burro Program, said the Nevada’s challenges are emblematic of those throughout the program.

“There is great urgency for resolution and germination of a path forward…,” he said. “I’m encouraged because there’s an increasing conversation and awareness in Congress … That conversation and awareness is occurring, and I think Congress is going to be key to the future here. I’m somewhat cautiously optimistic that we will have greater funding in the future – I’m hopeful for that – and that greater funding will allow implementation of new tools that we hope to gain from our research.

“These are extremely difficult times, and it is imperative that everyone come to the table and work together for solutions. Success and a sustainable Wild Horse and Burro Program is going to be composed of multiple management approaches. Not any one thing is going to solve this.”

Other challenges for the agency include what Bolstad said was the lack of a highly effective fertility control method, adoptions hovering at about 2,600 animals annually, and costs for caring for about 45,000 horses and burros in off-range holding corrals and pastures that amount to about 60-65% of its budget.

BLM cannot remove from the range more than 3,500 animals “because we will immediately become financially insolvent because of the cost to maintain un-adopted animals,” Bolstad said: “If we bring in 1,000 more than leave the system, that’s about $1.8 million that we take on in additional costs.”

One consequence of rounding up fewer horses, Bolstad said, is that BLM is “at risk and on the cusp of not having enough suitable and desirable animals to fuel our adoption program. So, where we can, we are targeting … selective removals to animals that are 5 years and younger, and that are much more desirable to adopt that many of the older animals in our system.

“We have to fuel the adoption program if we expect to expand it.”

Bolstad said that the program’s priorities are:

• Reducing holding costs by moving animals from aging corrals, which cost about $5 per day per animal, to new pastures which will cost about $2 per day, allowing BLM to divert money to on-range management;

• To “embrace and encourage new and different management approaches, including contributions and assistance from community groups”;

• Increasing adoptions in the East and online and rolling out a pilot program creating financial incentives for adopting aging horses that remain young enough to train.

The National Wild Horse and Burro Advisory Board is made up of nine federally appointed members that represent horse and burro advocacy and humane advocacy, as well as other interests that include livestock management, research, veterinary medicine and natural resources and wildlife management.

The board makes recommendations to BLM, which BLM reports back on at the board’s meetings.

With the meeting running behind schedule, Bolstad said he would discuss BLM’s actions in response to recent board recommendations on Friday. Also scheduled are more detailed presentations on BLM’s wild horse program, both on- and off-range, and its budget, as well as a presentation from the U.S. Forest Service.

The board is scheduled to resume its meeting at 8 a.m. Pacific time on Friday, with the meeting streaming at http://www.blm.gov/live/. For a pdf of the full agenda, click here.