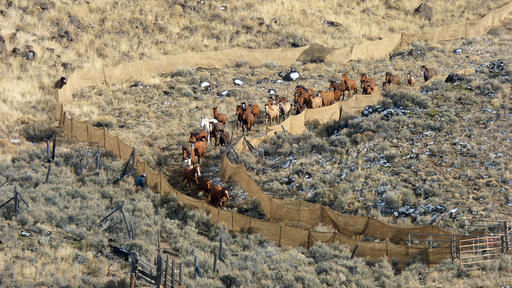 Wild horses are rounded up in Oregon in this Bureau of Land Management file photo.

Contrary to this earlier news report, the roundup has now been delayed by at least a week, according to the National Forest Service. We’ll keep you posted.

As published by The Herald and News

Land managers are hoping to gather 200 wild horses this month in Northeastern California during a 10-day roundup.

The gather is on The Devil’s Garden Plateau Territory of the Modoc National Forest. The territory is located approximately 5 miles north of Alturas, between Clear Lake Reservoir and Goose Lake, and consists of 300,000 acres of U.S. Forest Service land and 8,300 acres of Bureau of Land Management land.

The roundup began on Sept. 6 and will end on Sept. 16, a news release said.

According to Margie DeRose, acting district ranger for Devil’s Garden and Warner Mountains Ranger District, the horses are being gathered after requests were made by the Pit River Tribe and two private landowners who own property within and adjacent to the Devil’s Garden territory.

She said the requests were made because wild horses are causing damage to fences and habitat, and using the water on the land, which the landowners rely on for their own needs and livestock.

DeRose said based on the 1971 Wild Free-Roaming Horses and Burros Act, land managers are required to remove wild horses from the landscape when landowners make a request.

“We want to be good neighbors, so the upcoming gather will remove horses from private and tribal lands based on the requests we’ve received to remove them,” she said.

Wild horse surveys in the territory in 2013 yielded estimates of about 1,300 wild horses — much greater than the management objective of 206 to 402 adult wild horses.

The results of a “double count” aerial survey conducted in February showed the wild horse population in and around the Devil’s Garden Plateau Wild Horse Territory nearly doubled to an estimated 2,246 adult horses.

DeRose said population’s increase is likely influenced by mild winters and a persistent abundance of food.

“Drought hasn’t really impacted vegetation on the plateau as much as it has in other areas,” she said.

Wild horses have been present on the Devil’s Garden Plateau for more than 130 years. Many of the early horses escaped from settlers during the Indian Wars or were released when their usefulness as domestic animals ended.

DeRose said officials from the Bureau of Land Management and a contractor are managing this month’s gather.

The gathered horses will transferred to the Litchfield Wild Horse and Burro Facility near Susanville, Calif., where they can live until they are adopted.

“We are looking for folks to adopt the horses. We are hoping for a good response so we can get these horses to good homes,” she said.

Public viewing opportunities at the trap site will be available on a first-come-first-serve basis for up to 14 people each day, a news release said.

Public viewing will also be available after gathers at the temporary holding facility at Willow Creek Ranch, from 3 to 5 p.m.

“If folks are interested in horses that are over 6 years old, we’re encouraging them to come to the holding facility at Willow Creek Ranch because any horse 6 and older will be returned to the territory unless it is spoken for,” DeRose said.