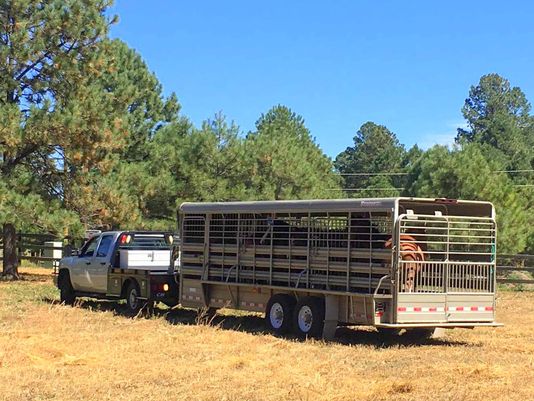 The Alto “wild” horse herd was delivered quietly back to Lincoln County Tuesday, ending a month’s battle between herd advocates and officials with the New Mexico Livestock Board.

The return of the horses to pens prepared on land owned by Shelley McAlister was arranged Monday, but advocates said the livestock board didn’t want a crowd waiting for the equines. They were told that the noise and commotion might upset the steeds, advocate Teeatta Lippert said.

“They called me 20 minutes before they got here and said I needed to get here, they were ready to pull into the driveway,” Lippert said.

McAlister said her notice wasn’t from board officials.

“Someone in Carrizozo saw the truck and asked if they were the horses going back to Alto,” she said. “They told a woman, who called me. We just happened to be here working on the security cameras and packing up the house.”

“I am really grateful for the way it worked out,” Lippert said. “Trying to sort them with people hollering or calling names or screaming would have made our job a lot harder and would have stressed them out.”

Unloading went swiftly over a 10 minute to 20-minute period, she said. None of the adult horses acted up, but some of the foals were frisky. The foals now are in pens with their mothers and one even began nursing immediately, she said.

“My biggest advice to the community is that our stance is that these horses are wild,” Lippert said. “They were born wild. They are wild, so we must keep our distance. If we brush them and pet them, and get them use to us, then our standing in court that they are wild goes out the window, because they are officially domesticated. And it would be inhumane at that point to release them back in the wild.”

The battle won’t really be over until a district judge decides whether the horses fall under a definition of wild or are estray livestock under the jurisdiction of the livestock board. Working under the latter assumption, board officials hauled away the 12 mares and foals after they were penned by a property owner as nuisances. The action spurred rallies and community meetings, as well as litigation by the Wild Horse Observers Association asking for a restraining order on the sale of the horses by the livestock board. The order was granted and while the court drama plays out, an agreement was reached to allow the horses to come back to Alto as the responsibility of nine volunteers. The horses must stay in isolation for 21 days and then, if the case remains undecided, could be transferred to larger secure pastures.

Lippert said she was impressed with how the community handled the issue in a peaceful manner.

“We achieved more than shootings and riots and bombings and fires,” she said. “And our children can see that a small town can make a difference. I was raised to have hope and that if you send it out there and you stand your ground and pray, it if it is meant to be, Jesus will answer you.”

But the executive director of the livestock board said not everyone exhibited stellar behavior. “I’d like to thank the staff of the New Mexico Livestock Board for their professionalism during this emotional issue,” William Bunce said Tuesday. “Their courtesy extended to others, while being maligned for holding to the letter of the law, is exemplary. Chapter 77 of the livestock code as well as the applicable Lincoln County Ordinances spell out very clearly that a legal process must take place. Those who expect this agency to operate otherwise, will continue to be disappointed. The vulgarity, insults and accusations thrown at our employees via telephone, email and various social media venues is nothing short of reprehensible. As this issue is currently in litigation, any further discussion should be limited to the legal counsels representing both sides.”

With Aspenfest parade scheduled for Saturday, Lippert and several others said they hope to celebrate the return of the horses with a banner.