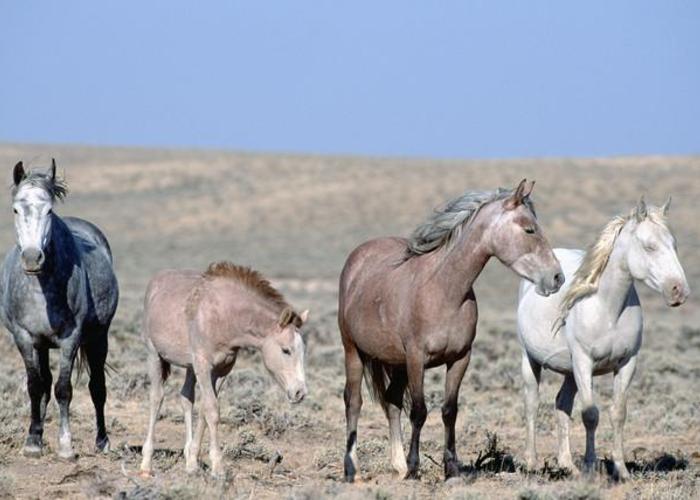 As published by Courthouse News Service

CHEYENNE, Wyo. — The Secretary of the Interior will remove 500 wild horses from public and private lands in Wyoming only with a court order, the American Wild Horse Preservation Campaign said in a Monday lawsuit.

Two other advocacy groups and two photographers joined the Campaign as plaintiffs in the federal complaint against the Secretary of the Interior and the Bureau of Land Management. They say the BLM plan violates the Wild Free-Roaming Horses and Burros Act, aka the Wild Horse Act, which states that wild horses may be removed only from private lands.

Checkerboard lands are lands in which public and private acreage are intermingled, in a checkerboard pattern.

The BLM says its decision is authorized under Section 4 of the Wild Horse Act.

Section 4 of the Act states: “If wild free-roaming horses or burros stray from public lands onto privately owned land, the owners of such land may inform the nearest federal marshal or agent of the Secretary, who shall arrange to have the animals removed.”

The act does not appear to give the BLM specific authority to remove wild horses from public lands allocated to wild horse use and management unless the agency determines, under Section 3 of the Act, that there is overpopulation and that action is necessary to remove the “excess” animals.

“Because the BLM admits in its 2016 Decision Record that at least half of the horses subject to permanent removal are currently found on public land, BLM’s failure to make any of the congressionally mandated determinations in Section 3 before permanently removing from the range approximately 500 wild horses is a violation of the Wild Horse Act and the Administrative Procedures Act,” the groups say in the complaint.

Ironically, by permanently removing the horses, the BLM would be ignoring its own “binding” Resource Management Plan calling for maintenance of wild horse populations that do not fall below defined Appropriate Management Levels, which is a violation of the Wild Horse Act, the Administrative Procedures Act and the Federal Land Policy and Management Act, the plaintiffs say.

Their attorney William Eubanks suggested that the BLM, under pressure from ranchers and conservationists, have effectively “thrown up their hands” in an unending battle over grazing rights, effectively designating all lands in the Checkerboard as private to placate powerful cattlemen.

“This is a new tactic adopted two years ago,” Eubanks said in an interview. “They are treating [public] lands of the Checkerboard allocated for horse management as private lands. The Wild Horse Act says you can’t remove any wild horse without meeting certain prerequisites. They are trying to get around that by calling all the land private land, so they don’t have to comply with federal law.”

The Tenth Circuit heard oral argument on Sept. 19 concerning an appeal in an earlier lawsuit challenging the BLM’s 2014 roundup of more than 1,200 wild horses, most of which are still in long-term holding facilities, where Eubanks said many will die, while others wait for adoption.

Also at stake are about 1 million acres of public lands used in part for livestock grazing, where wild horses compete for forage.

“They [BLM] are getting lots of pressure from private livestock grazing interests. BLM always gets pressure from this group. It’s big business,” Eubanks said.

He said the BLM could have some interests of its own.

“What BLM gets is a certain amount of money per acre for grazing permits,” Eubanks said. “So you could make the argument that they favor the livestock industry because they could supplement their income that way. It could be a big factor in all of this.”

Eubanks said the situation is not new, but that the BLM’s designating all lands in the Checkerboard as private are unprecedented.

Clearly, the plaintiffs are unhappy.

“The BLM is turning over control of more than 1 million acres of public land to private grazing interests that want wild horses eradicated from the range,” said Suzanne Roy, executive director of The American Wild Horse Preservation Campaign.

“This sets a terrible precedent that jeopardizes the safety and future of wild horses across the west.”

A spokesman for the BLM did not return a phone call made after hours.

The plaintiffs, who include photographers Ginger Kathrens and Kimerlee Curyl, allege violations of the Wild Horse Act, the Federal Land Policy and Management Act, the National Environmental Policy Act and the Administrative Procedures Act. They seek an order setting aside the BLM decision and its final Environmental Assessment and Finding of No Significant Impact, and remanding the matter to BLM.

They also want an injunction stopping the roundup until the BLM complies with the law, and costs of suit.

Eubanks is with Meyer Glitzenstein & Eubanks, in Fort Collins, Colo.