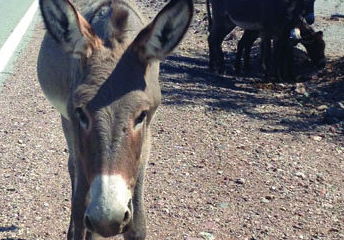 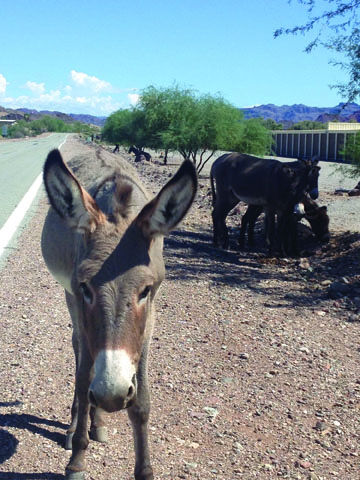 As published by Today’s News-Herald

A proposal to treat wild burros in Mohave County with the fertility control drug PZP is gaining traction.

For more than four decades, land management agencies have endured an increasingly difficult challenge of how to control the growth of wild horse and burro populations across the west.

The money funds 21 projects aimed at developing new tools for managing healthy horses and burros on healthy rangelands, including effective ways to slow the population growth rate of the animals and reduce the need to remove animals from the public lands.

Tapping into the funding stream locally is a Humane Society of America proposal – in conjunction with the BLM – to treat female burros (jennies) with the fertility control drug PZP (porcine zona pellucida) in the Black Mountain Herd Management Area north of Lake Havasu City.

The proposal is currently under a National Environmental Policy Act review, which BLM anticipates to be completed by late fall.

With a population of about 1,800 burros, nearly four times as many as the established “appropriate management level,” this proposal is a good step forward, said Victoria Anne, BLM, NEPA planning and environmental coordinator.

“What the Humane Society is proposing is to use 115-165 animals during the four-year study that will be divided into four groups with one being a control group,” Anne said.

The control group of 60 burros – labeled group A – will include 10 Jennies (group D) that have long inhabited the town of Oatman.

On the rangeland population, “Bait traps will be used to administer the first round of PZP vaccinations to group B,” Anne said. “This group would receive the first shot and then be kept in a holding facility two weeks at which time they would get a booster shot. After that they would be returned to where they were captured and released.”

Group C, Anne added, would get their first PZP shot and then allowed to immediately go back onto the range.

According to the BLM’s Environmental Assessment, attempts would be made to then apply annual booster shots to all previously treated animals during the length of the project.

“It’s about $30 a shot and this does not include the personnel and time to find the animals, but you have to weigh this against the costs of placing burros in holding facilities,” Anne said.

BLM estimated there were 67,000 wild horses and burros on federal land in 10 states, 2.5 times more than the range can support.

However, government corals and leased pastures are maxed out, where 47,000 horses nationwide cost taxpayers about $50,000 per head over the course of the animals lifetime.

Currently at Arizona’s only holding facility in Florence there are 137 burros and 448 wild horses.

In Mohave County, the burro population has grown to such a degree that earlier this year Supervisor Steve Moss warned if BLM did not take long-term action to control the burro population, the county would pursue legal action against the bureau for not carrying out its statutory duties outlined in the Wild Free-Roaming Horses and Burros Act of 1971.

To meet the growing need, for fiscal year 2015, Congress appropriated more than $77.2 million to the Wild Horse and Burro Program.

At more than $2.3 billion needed to house and care for the current level of wild horses and burros corralled in government pens for the remainder of their lifetime, many ask if continuing the status quo is fiscally responsible.

“Burros are much more flexible when it comes to when they breed. They really don’t have an established season as horses do, so it’s important to find out how PZP works for the burros,” Bolbol said. “But, this is something that should have been done years ago. We should already know this information and we are just doing this now in 2016, we are way behind the eight ball, but it is absolutely what should be done. I look forward to seeing the data and I hope it shows PZP is highly effective.”