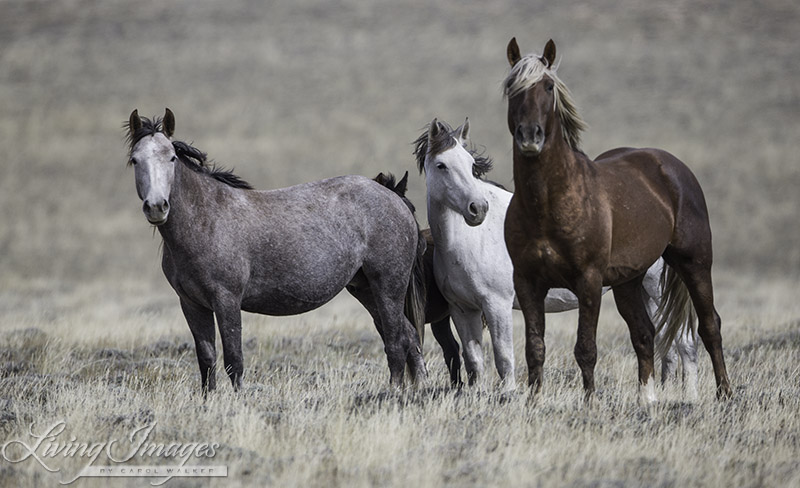 Denver (Oct. 14, 2016) — The U.S. Court of Appeals for the 10th Circuit today issued a landmark decision that stops the Bureau of Land Management from wiping out wild horses from over one million acres of public land in the Wyoming Checkerboard.

The ruling holds that BLM violated two federal laws in its conduct of a 2014 wild horse roundup that removed over 1,263 wild horses from the area, and means that the agency’s plan to round up 500 more horses from the Checkerboard beginning on Oct. 18 is also illegal.

Plaintiffs American Wild Horse Preservation Campaign, The Cloud Foundation, Return to Freedom and photographers Carol Walker and Kimerlee Curyl and their attorney, Bill Eubanks, of Meyer, Glitzenstein and Eubanks, are hailing the decision and its precedential implications for wild horse management throughout the western United States.

“This ruling throws a wrench into the backroom deal between the BLM and livestock grazing interests to eliminate federally protected wild horses from over one million acres of public land in Wyoming,” Eubanks said. “With this landmark decision, the 10th Circuit has permanently stopped the BLM from treating public lands as private and eliminating wild horses from public lands based on a request from private landowners.

“This sets a major legal precedent across the West and protects wild horses from ranchers who want to eliminate these iconic animals from our public lands in order to put even more domestic cattle and sheep on these public lands to the detriment of the ecosystem.”

In its ruling issued today, the 10th Circuit held that “the BLM violated both the [Wild Free Roaming Horses and Burros] Act and FLPMA [Federal Land Policy Management Act] in carrying out the 2014 removal of wild horses from the Checkerboard.”

Today’s decision is a closing chapter in an ongoing legal battle over the BLM’s plan to eradicate wild horses from a two-million-acre area of public and private land at the request of the Rock Springs Grazing Association. The RSGA owns or leases the private land blocks in the Checkerboard and views wild horses as competition for taxpayer subsidized livestock grazing on the public lands in the area.

Last week, the plaintiffs filed another lawsuit to block the agency from proceeding with the next Checkerboard roundup, set to begin on Oct. 18.

This is the third major legal victory for the groups in just over a month. Earlier this week, the 10th Circuit threw out a lawsuit by the State of Wyoming to compel the BLM to remove hundreds of wild horses from non-checkerboard public lands in that state. In a precedential ruling, the 10th Circuit held that the BLM is not required to remove wild horses from public lands just because their populations exceed outdated population limits.

On Sept. 9, the BLM cancelled plans to conduct cruel surgical sterilization experiments on wild mares in Oregon, citing a lawsuit filed by The Cloud Foundation and AWHPC as the reason.

Return to Freedom is a national nonprofit dedicated to wild horse preservation through sanctuary, education and conservation, and also operates the American Wild Horse Sanctuary in Lompoc, Calif.

The American Wild Horse Preservation Campaign is a national wild horse advocacy organization whose grassroots mission is endorsed by a coalition of more than 60 horse advocacy, public interest, and conservation organizations. AWHPC is dedicated to preserving the American wild horse in viable, free-roaming herds for generations to come, as part of our national heritage.

The Cloud Foundation is a nonprofit organization dedicated to the preservation and protection of wild horses and burros on our Western public lands with a focus on protecting Cloud’s herd in the Pryor Mountains of Montana. Cloud is the subject of Foundation founder Ginger Kathrens’ groundbreaking PBS/Nature documentaries.