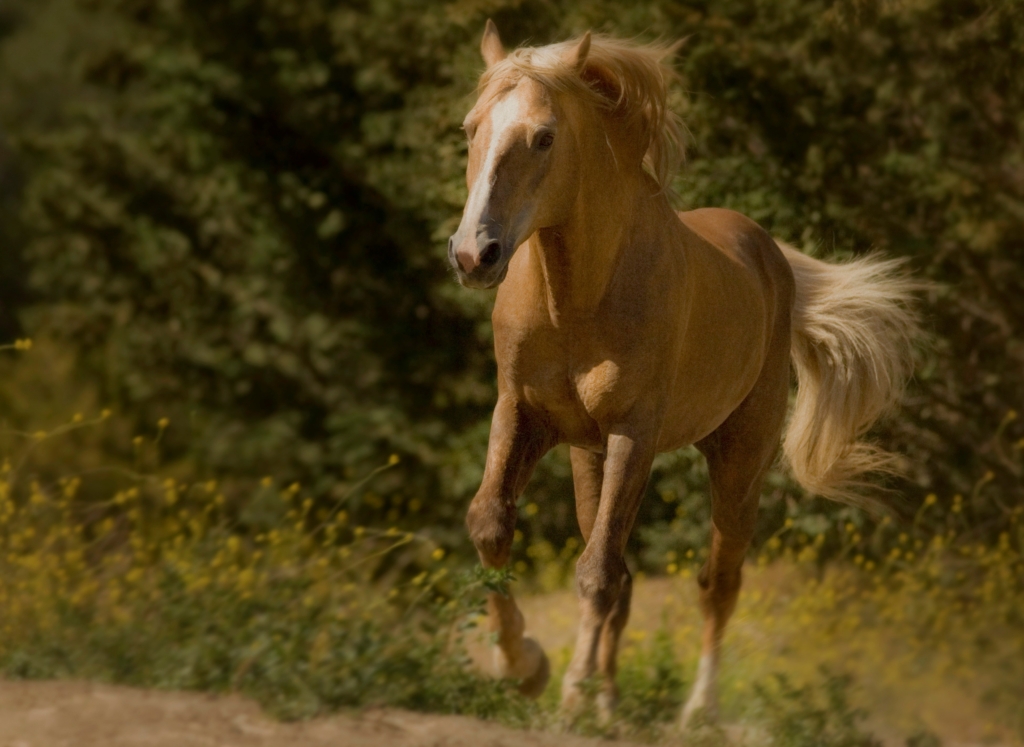 Update: Read about the award ceremony and find more coverage of Sutter, including videos, by clicking here.

Born wild and once marked for destruction, Sutter, a stunning palomino stallion, has been named Horse of the Year by The American Society for the Prevention of Cruelty to Animals. He lives at Return to Freedom’s American Wild Horse Sanctuary near Lompoc, Calif., where he serves as an ambassador for wild horses.

“Sutter’s suffering as a result of his capture is emblematic of tens of thousands of nameless and faceless wild horses,” said Neda DeMayo, Return to Freedom’s founder and president. “His story is a tribute to what’s possible when the right environment and treatment prevail. We are overjoyed that this kind stallion, who has given so much to so many people during his 30 years, is being recognized by the ASPCA.”

Sutter and other remarkable and heroic animals and people will be honored at the ASPCA’s annual Humane Awards Luncheon on Nov. 17 in New York City. The event recognizes animal heroes who have demonstrated extraordinary effort as well as individuals who have shown great commitment to animal welfare.

Born in northwestern Nevada, Sutter was captured from public lands when he was barely 2 years old. He was adopted to a private party through the Bureau of Land Management. Sutter subsequently endured abuse, including being whipped, left tied under a hot tarp, and deprived of food and water.

Deemed “dangerous,” Sutter was returned to the BLM and marked to be destroyed. Fortunately, he was rescued from the pen by the Heritage Discovery Center in central California.

For months, Sutter remained so traumatized that if anyone even walked nearby his enclosure, he would slam himself into walls, attempting to free himself. Given patient, loving care, Sutter learned to trust humans, even appearing at venues including the Rose Bowl Parade, where he safely carried a novice rider, as well as in a number of educational documentaries and clinics.

In 2002, HDC was forced to move and downsize, Neda DeMayo was contacted and, asked if she would be Sutter’s permanent guardian. Since then, Sutter has resided at Return to Freedom’s American Wild Horse Sanctuary where his presence and story continue to educate the public about natural horse behavior, the horse and human relationship, and the wild horses who deserve our promised protection.

Following a nationwide public call for nominations, an ASPCA-appointed committee reviewed hundreds of entries and selected winners in eight categories, including Horse of the Year.

Return to Freedom is a national non-profit dedicated to preserving the freedom, diversity and habitat of wild horses and burros  through sanctuary, education, advocacy and conservation. It has operated the American Wild Horse Sanctuary on California’s Central Coast since 1998.

You can help residents of RTF’s American Wild Horse Sanctuary by donating here.

News of The Horse