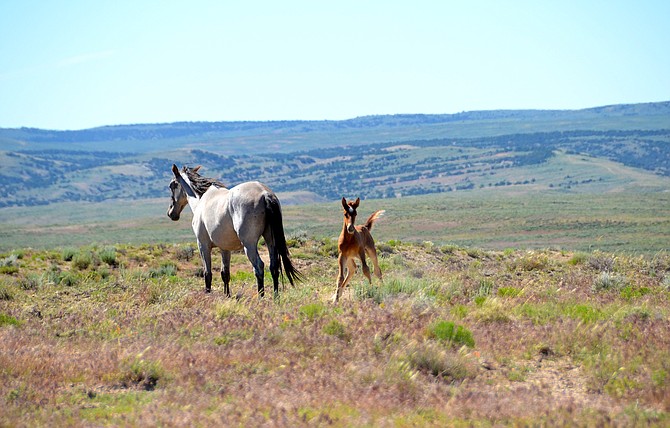 As published by the Craig Daily Press

Clouds of dust kicked up by crazed horses running from low-flying helicopters, as bystanders sob in protest has become a traditional scene when the Bureau of Land Management gathers wild horses and burros from public lands.

However the next gather in Northwest Colorado will use new tactics.

BLM’s Little Snake Field office in Craig will use a bait and trap method to gather 50 young — 1- to 3-year-old — wild horses in the BLM Sand Wash Herd Management Area about 45 miles west of Craig.

Wild horse advocates will be involved in every part of the process. The gather is a collaboration between the agency and groups that often are in conflict.

“When we formed, we realized we would have to work with BLM,” said Aleta Wolf who is the program director for the Great Escape Mustang Sanctuary’s Sand Wash Advocacy Team (SWAT).

The idea of working with BLM set in motion a partnership that SWAT member Shawn Stoehr hopes will “keep wild horses wild.”

The transformation of tradition

Helicopter gathers are not popular and have recently been challenged in court.

In 1971, the United States Congress passed the Wild Free-Roaming Horses and Burros Act that says “Congress finds and declares that wild free-roaming horses and burros are living symbols of the historic and pioneer spirit of the West; that they contribute to the diversity of life forms within the nation and enrich the lives of the American people; and that these horses and burros are fast disappearing from the American scene.”

It was then that the Secretary of the Interior and the Secretary of Agriculture became the agencies designated to manage unbranded and unclaimed horses and burros on public lands where they existed in 1971.

The goal was to “preserve and maintain a thriving natural ecological balance and multiple-use relationship in that area.”

Later Congress amended the act to allow for the removal of “excess” horses. In 1976 an amendment provided “BLM with the authority to use helicopters to inventory and assist in capturing animals and the use of motorized vehicles to transport captured animals,” states BLM’s Nevada Wild Horse and Burrow website.

The Craig Daily Press on Sept. 19, 2015 reported that the operation “brought tears to the eyes of several wild horse advocates” who witnessed the gather.

Helicopter gathers have been widely criticized.

During the West Douglas operation “two horses died during the gather, and 162 were ultimately gathered and transferred to Cañon City,” said BLM Public Affairs Specialist David Boyd. “Of those 162, 140 are still at the facility. Eight have been adopted, eight have died and six are currently in training at Great Escape Mustang Sanctuary.”

A recent ruling contested a planned horse gather this fall on land called the “Checkerboard” in Southwest Wyoming due to BLM’s removal of 1,263 horses from the same area in 2014.

“BLM violated both the Act and the Federal Land Policy and Management Act in carrying out the 2014 removal of wild horses from the Checkerboard,” said Mary Beck Briscoe, circuit judge for the United State Court of Appeals Tenth Circuit who presided over the court case.

Briscoe’s ruling now means “that the agency’s plan to round up 500 more horses from the Checkerboard beginning on Oct. 18 is also illegal,” according to a statement by the American Wild Horse Preservation Campaign, one of groups behind the lawsuit.

The dangers and controversy of helicopter gathers, limited options for horses once removed from the land as well as the cooperative spirit of local activists has created a shift in management of the Sand Wash herd.

Rather than gathering horses by helicopters, they will be bribed into corals using water, food and treats as bait.

“We will be baiting them in with something that is attractive and slowly build a corral over several days and when the right horses are inside you close the gate.

This can take days or even weeks,” Boyde said. “We will select the horses to be removed and they will go to the corral in Sand Wash before they will be transported to the facility in Cañon City for freeze branding, health checks, gelding. Most will be relocated to Great Escape Mustang Sanctuary in Deer Trail.”

Three primary criteria will be used to select horses for removal.

“We will work with the Sand Wash Advocacy Team and Great Escape Mustang folks as we are selecting horses, between the ages of 1 and 3, very adoptable horses and using a list of horses that we don’t want removed for genetics or different features,” Boyde said.

Volunteers of the SWAT have been carefully tracking the horses for a number of years and have counted almost 300 horses between the ages of 1 and 3 years.

“Horsebase is a Windows program, including Windows tablets, that allows for identification of the horse to assist with field identification,” Paulick said. “This is so much easier than using the old books as we can update it.”

The birth control is called Porcine Zona Pellucida or PZP.

Mares lured into the trap will be injected before being released along with foals and older stallions.

“The BLM is committed to maintaining a healthy wild horse population in Sand Wash over the long term,” said BLM Little Snake Field Manager Bruce Sillitoe. “This small gather and fertility treatment will help keep their habitat healthy, which is key to keeping the wild horse healthy.”

The bait and trap was supposed to begin this weekend, according to a press release issued on Sept. 21 by BLM, however the start of the program has been delayed until November.