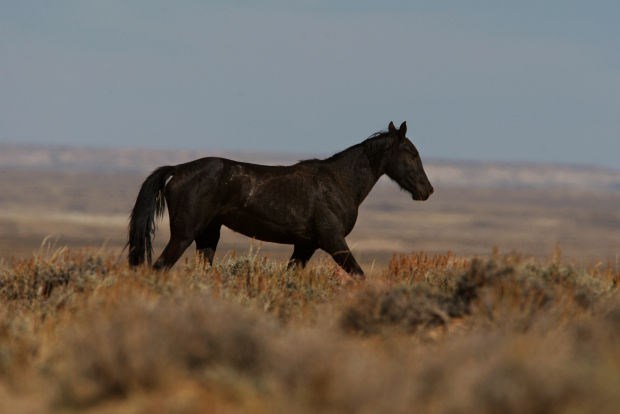 To read the Oct. 14 press release about the court’s decision from Return to Freedom and its fellow plaintiffs, please click here.

As published by Casper Star Tribune

The Bureau of Land Management may not treat public lands as private out of practical considerations, a federal appeals court wrote in an opinion released this week.

The 10th Circuit Court of Appeals issued an Oct. 14 ruling that concluded the BLM’s 2014 roundup of wild horses in the checkerboard region was illegal. Monday’s decision explained the court’s reasoning.

The judges wrote that the BLM violated the Wild Horses Act due to the difficulty of rounding up horses in the region, where public and private land alternate in one-square-mile plots in south-central Wyoming.

“Its methodology was to treat public lands as private lands,” Judge Monroe McKay wrote in a concurring opinion. “But, though the BLM’s solution to the problem presented by the checkerboard may seem reasonable, it is not in accordance with the [law].”

The case originated in 2013 when the Rock Springs Grazing Association sued the BLM demanding the agency remove wild horses from their land in the checkerboard.

The BLM agreed to do so and determined the only way to keep horses off the grazing association land was to remove them from the public plots of land as well, given that the area is unfenced and horses move around on a daily basis.

But horse advocates sued the BLM claiming that while the agency can unilaterally remove horses from private land, it must go through an extensive review process before removing horses from public land.

A U.S. District Court in Wyoming initially sided with the BLM but the 10th Circuit decision overturned that ruling and agreed with the argument made by horse advocates.

The appeals court ruled that while the BLM claimed it was justified in treating the entire checkerboard as private given the “unique land management situation,” the agency lacked the authority to make this judgement.

There is “no basis for BLM to construe the terms ‘privately owned land’ and ‘private lands’ to include the public land sections of the checkerboard,” the court wrote.

“[P]ractical realities do not provide BLM with the authority to construe the [Wild Horses] Act in a manner contrary to its plain and unambiguous terms.”

While the ruling released earlier this month halted the BLM’s checkerboard roundup planned for Oct. 18, Monday’s full opinion may set a precedent for similar cases around the West.

The groups that sued the BLM, including American Wild Horse Preservation Campaign and the Cloud Foundation, argued that the BLM’s actions in the checkerboard posed a wider threat to public land management.

If the BLM was allowed to treat public lands within the checkerboard as private for purposes of horse roundups, the groups argued the agency could also treat other public land as private if it helped them meet their land management objectives.

But the 10th Circuit decision may put this concern to rest.

“[T]here is simply no ambiguity in the terms ‘public lands,’ … and ‘private lands,’” the court wrote.