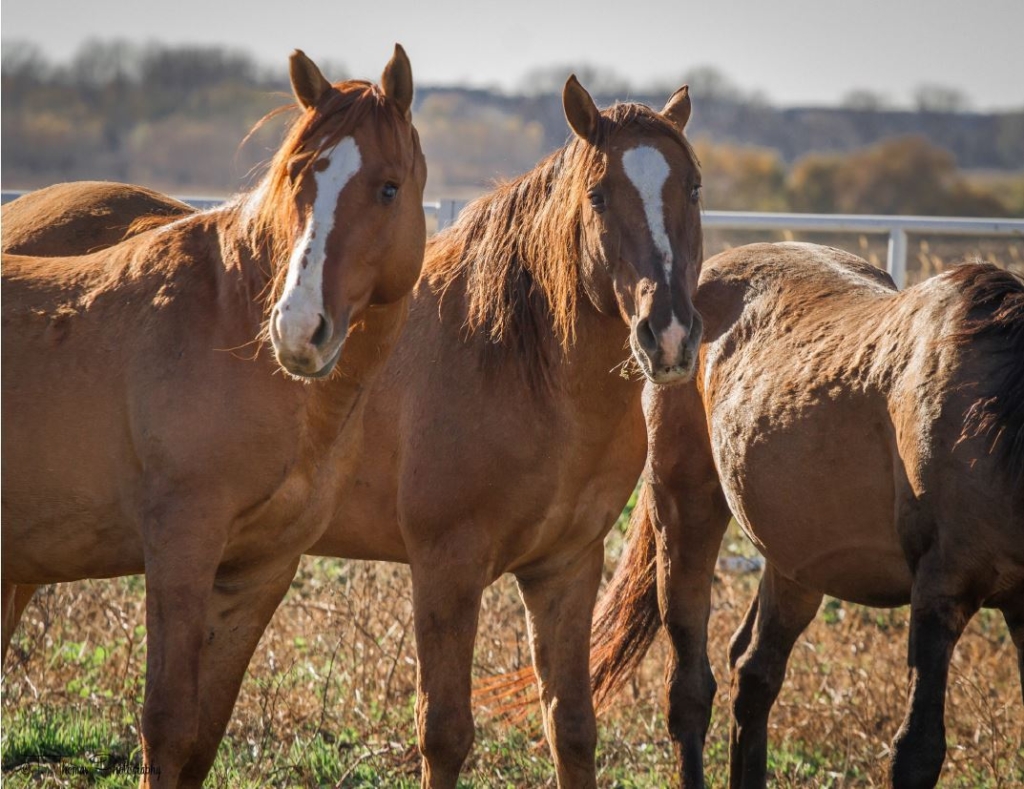 Three of the blind mustangs transported from an overcrowded sanctuary in South Dakota to the nonprofit Wishbone Ranch near Hastings, Minn. Photo by Toni Thomas.
2016-11-07T22:50:27+00:00November 7th, 2016|

Three of the blind mustangs transported from an overcrowded sanctuary in South Dakota to the nonprofit Wishbone Ranch near Hastings, Minn. Photo by Toni Thomas.

As published by Star Tribune

Seven blind mustangs with bloodlines that stretch back to horses brought to the Americas by 15th century Spanish explorers will live out their days in Minnesota.

A local horseman and his crew picked up the horses in South Dakota last week and brought them to the nonprofit’s Wishbone Ranch just outside of Hastings. The ranch, already home to two blind horses, is equipped with special plastic pipe fencing that won’t injury the animals if they bump into it, said Pete Swentik, This Old Horse program director.

“The alternative was they would be euthanized,” Swentik said.

The nonprofit has partnerships with the University of Minnesota Extension Horse program. Swentik said he’s hopeful they take in an interest in Wishbone Ranch’s newest residents who have an interesting pedigree and an undiagnosed eye problem.

“We don’t know anything about their blindness until we have someone look at them,” Swentik said. “We don’t know if its heredity or environmental.”

The seven blind mustangs are descendants of the Spanish horses brought to the continent in the 1500s. Those horses became wild and have wandered the Western United States for centuries.

In 1996, the U.S. Bureau of Land Management planned to remove dozens of wild horses near Gila Bend, Arizona. A private sanctuary called The International Society for the Protection of Mustangs and Burros in Lantry, S.D. took those animals in but are now unable to maintain enough habitat for their herd of more than 800 animals.

That’s why the Minnesota nonprofit agreed to step in and care for some of the most vulnerable animals.

Founded by Nancy Turner in 2012, This Old Horse currently cares for about 40 retired, rescued and recovering horses.

“We are generally a retirement, surrender and rehab facility, “ Swentik said.

People who can no longer care for their horses can surrender the animal to the nonprofit. Performance horses with medical problems also reside there. Relations of the Triple Crown winners Secretariat and Seattle Slew live at Wishbone Ranch.

There’s a waiting list of people seeking to surrender horses.

“This is a place where the horses could retire and be honored for the service they gave us,” Swentik said.

The nonprofit relies on a core group of 100 volunteers who feed and care for the horses twice daily. They have less than 10 paid employees.

“They look distinctive,” said Monica Carlson, a spokeswoman for This Old Horse, of the new mustangs. “They are smaller than quarter horses and they have more of a Roman face. And they are little shaggier.”