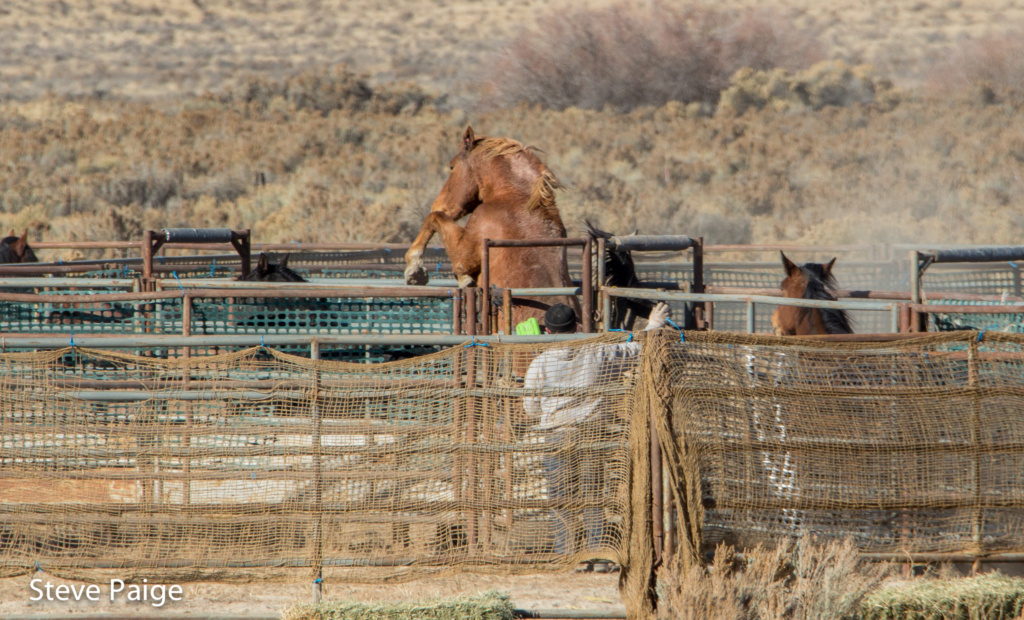 Two mares, ages 10 and 14, died and 151 wild horses were captured on Sunday during the ongoing Owyhee Complex helicopter roundup in Northern Nevada.

The Bureau of Land Management listed the causes of dead as chronic / preexisting conditions, with no further detail provided. Sunday’s deaths bring the total to 13 since the roundup began on Nov. 2.

No veterinary reports that might shed more light on the deaths have been posted since Nov. 8.

The deaths are also the fifth and sixth since Friday, when the second phase of the roundup began on the Little Owyhee Horse Management Area.

The public has not been allowed to view the roundup since this phase began. The BLM has said that this is because of “private land access issues,” and that the land owner will allow access on Tuesdays and Thursdays only.

RTF’s humane observer, Steve Paige, was only allowed to photograph temporary holding pens from a nearby road on Friday and Saturday before being asked not to take photos of horses in trailers as they came down the road.

That brings the total for the entire roundup to 1,210 wild horses captured (466 studs, 515 mares and 194 foals). Of those, 198 wild horses have been returned to the range — including 94 mares treated with PZP-22 fertility control vaccine.

Also on Sunday, 84 wild horses were transported to the Palomino Valley Wild Horse and Burro Adoption Center near Reno, Nevada. Horses that are not adopted will later be taken to BLM off-range pastures.