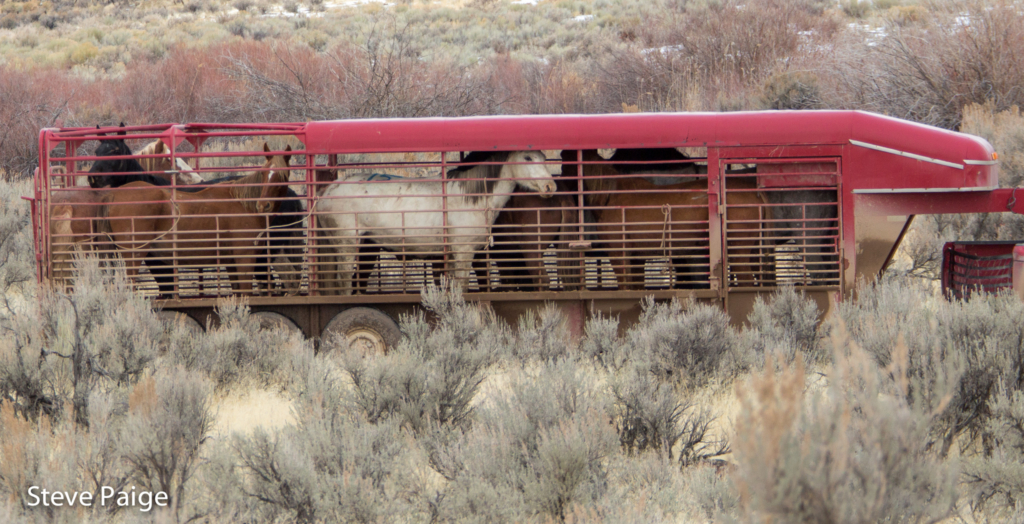 Wild horses are transported Thursday from temporary holding to a release site. Photos and video by Steve Paige.

The Bureau of Land Management will capture 200 additional wild horses — beyond its originally planned 1,600 — as part of the Owyhee Complex helicopter roundup, now in its second month.

The additional wild horses are not on a Herd Management Area, BLM told humane observer Steve Paige of Return to Freedom.

Thursday’s announcement came after 201 wild horses were released back onto the range: 103 mares treated with the fertility control vaccine PZP-22 and 98 studs. All are estimated to be ages 7 and older.

Even before Thursday’s announcement, the Owyhee roundup was one of the largest in recent memory: A total of 1,603 wild horses have been captured since it began on Nov. 2. Of those, 399 have been released, including 226 treated with PZP-22. Seventeen horses have died.

Of those, 1,100 were to be permanently removed from the range, while the balance — older mares, treated with fertility control, and stallions — were to be re-released onto their home ranges.

The captured wild horses are being transported from temporary holding to the Palomino Valley Wild Horse and Burro Adoption Center near Reno, Nevada. Those not adopted will later be taken to BLM off-range pastures.

Of the wild horses that have died during the roundup, BLM has listed 13 as having pre-existing conditions and four as acute. It has posted veterinary reports related to three of the deaths.

BLM labels deaths as “chronic/pre-existing” when an animal dies or is euthanized for reasons related to conditions “such as body condition, lameness, serious physical defects, etc. This term will include animals that are euthanized for conditions not brought about by the gather activity.”

BLM defines “acute” deaths this way: “when an animal dies or is euthanized due to acute injuries or medical conditions brought about by the gather and removal process including those that occur during capture, sorting and holding at the gather site. This term will include animals that die for known or unknown reasons thought to be related to gather activities.”

Tractor-trailers are loaded with wild horses bound for the Palomino Valley Wild Horse and Burro Adoption Center, where they will be prepared for the Bureau of Land Management adoption program.

Above and below: Trailer after trailer carried 201 wild horses to a release site on Thursday. Mares treated with PZP-22 fertility control vaccine were freeze-branded with “FC” on the left side of their necks. 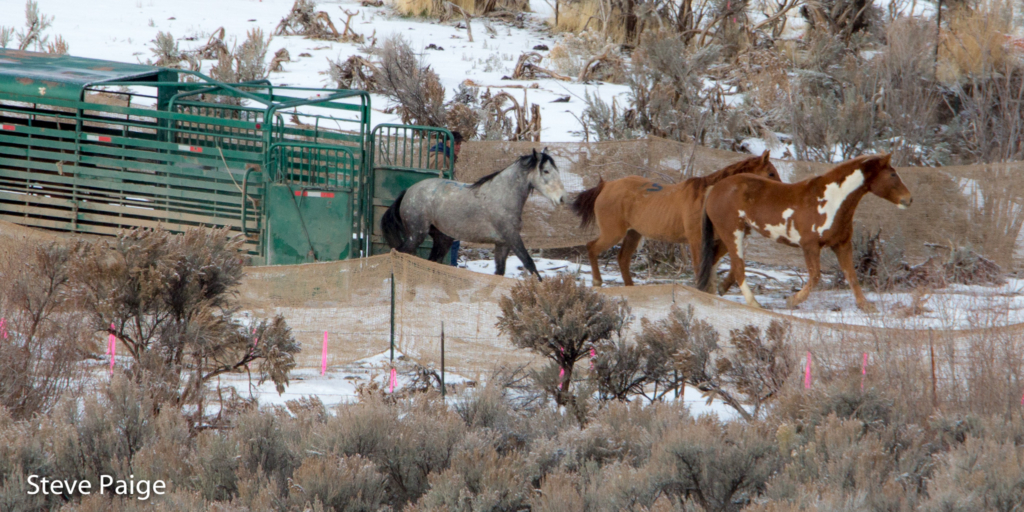