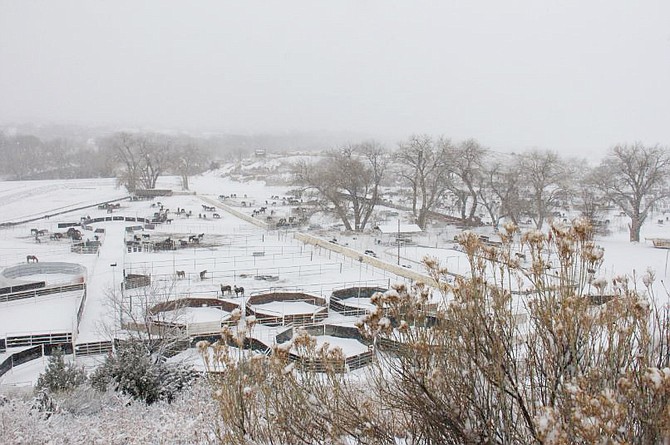 As published by Craig Daily Press

Craig — Storms that have blanketed Northwest Colorado in over two feet of snow have caused the Bureau of Land Management to delay the resumption of the wild horse bait-trap operation they have had underway since early November in Sand Wash Basin.

“With the recent snowfall we are holding off resuming gather operations because access is difficult,” said BLM Public Affairs Specialist for the Northwest Colorado District, David Boyd.

Sand Wash Basin is located roughly 45 miles west of Craig and is home to nearly 600 wild horses, roughly twice the number allowed in the BLM management plan for the area.

BLM is using bait-traps to remove 50 young horses from the herd to help control the population.

Hay is used as bait to lure the horses into temporary corrals.

“The temporary fencing is still in place, but the gates are tied open and the triggers removed. This will allow us to resume again fairly easily, but not risk trapping horses when no one is there,” Boyd said.

Before halting the the operation for the holidays in late December, 34 young horses had been removed and transported to BLM’s wild horse holding facility in Cañon City.

A foal that had been injured in an incident, unrelated to the gather, was also captured and euthanized bringing the total horses removed to 35.

To achieve their goal of removing 50 young horses, BLM will resume operations once roads are again accessible.

“We can gather through April 30 under the current contract,” Boyd said. “We will resume operations when conditions present another opportunity.”

The Great Escape Mustang Sanctuary and its on-range program, the Sand Wash Basin Advocacy Team (SWAT), are assisting the BLM with the gather and adoptions. More information about adopting Sand Wash Basin horses is available from the SWAT Facebook page.