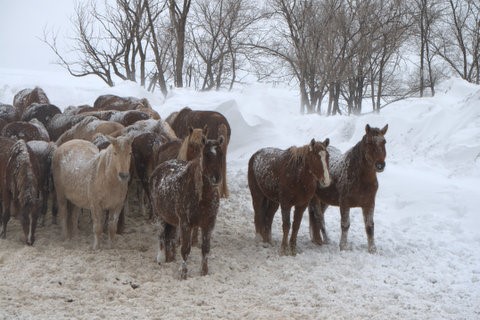 The Griffin-Soffel Equine Rescue Foundation has generously pledged $50,000 in matching funds through The Wild Horse and Burro Sanctuary Alliance to support the rescue of 520 horses, among them foals and pregnant mares, enduring freezing temperatures in Lantry, S.D.

An estimated $250,000 is needed to continue to pay for the care and transport of these horses that the court in Ziebach and Dewey counties impounded last October following a finding of neglect against the International Society for the Protection of Mustangs and Burros.

Donors should contribute to the No Horse Left Behind Fund through the Wild Horse and Burro Sanctuary Alliance website (http://wildhorsesanctuaryalliance.org) to maximize their support one of the largest known horse rescues in U.S. history.

Return to Freedom, a founding member of the Alliance, Fleet of Angels and partners are working to secure a new staging area with adequate facilities to safely treat unhandleable at-risk horses so they can be properly prepared for transport to new adoptive homes as soon as possible.

At present, a small ground crew led by Palomino Armstrong continues to work on snow-covered fields with little of the infrastructure needed to attend to unhandleable horses in need, other than panels that have been donated or recently purchased. While the conditions of most of the horses have improved since October, others still suffer from a variety of health issues, including eye infections and blindness, hoof problems, and parasites.

“This is a team effort,” said Neda DeMayo, president of Return to Freedom. “Without the support of donors, The Griffin-Soffel Equine Rescue Foundation, The Humane Society of The United States, ASPCA, Wild Horse and Burro Sanctuary Alliance, and Victoria McCullough, more than 500 horses would have been sold at public sale with most winding up hauled to Mexico or Canada for slaughter.”

The consortium of animal- and equine-welfare groups and their donors averted the auction by covering more than $200,000 in costs, including reimbursing the counties for their costs in December. But now, those 520 horses need to be relocated to their adopted homes by the end of March.

“The response from the public to the plight of these horses has been overwhelming,” DeMayo said. “It is a testament to how Americans feel about horses and how the equine community can come together to support them.”

Costs continue to mount, however. While it appears that a sufficient number of adoption applications has now been received, donations are urgently needed to pay for feed, labor, veterinary and farrier care, among other costs, running about $2,000 per day.

The horses still to be moved to new homes were among 810 found by the counties to be neglected on Oct. 11, 2016. As Return to Freedom galvanized the fundraising effort to pay for feed, care and other needs, Fleet of Angels placed 270 of the horses in new homes before the holidays with a small, committed team led by Arnstrong working for months in unforgiving conditions.

Fleet of Angels subsequently took control of all but 20 of the remaining horses remaining as part of a settlement agreement between ISPMB and South Dakota state’s attorneys.

“It is imperative that we succeed in this mission,” said Elaine Nash, president of Fleet of Angels. ”If we can find new homes for 810 horses, the equine community can definitely find homes for two, four, or six horses at a time that need help and show that slaughter is not a needed option.”

The last domestic horse slaughter plants were shuttered in 2007, but American horses continue to be trucked to slaughter houses in Mexico and Canada, including an average of 127,000 horses per year from 2008-15, according to the U.S. Department of Agriculture.

How the public can help

No Horse Left Behind Fund: The Griffin-Soffel Equine Rescue Foundation has offered to match donations through the Wild Horse and Burro Sanctuary Alliance dollar for dollar up to $50,000. The public can support the horses while adoptions continue by donating to a fund created to for feed, veterinary care, and all other costs related to the lifesaving mission for the ISPMB horses by donating to the Wild Horse and Burro Sanctuary Alliance: http://wildhorsesanctuaryalliance.org/