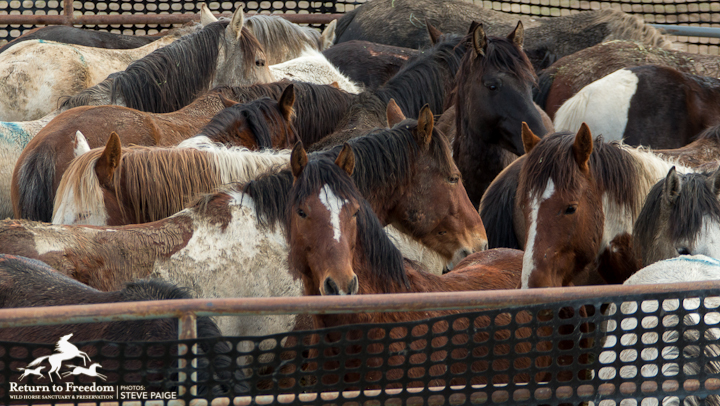 Wild horses crowded into a temporary corral after being captured during the Cedar Mountain Herd Management Area helicopter roundup in Utah earlier this year. President Trump's budget proposal would put all captured wild horses and burros at risk of euthanasia or being sold to slaughter. Photo by Steve Paige.
2017-02-21T19:07:19+00:00February 21st, 2017|

Faced with high winds and a forecast calling for snow, the Bureau of Land Management has ended early the helicopter drive trapping of wild horses at Cedar Mountain Horse Management Area in Utah. The roundup had been scheduled to continue until Feb. 27.

On Tuesday, BLM started treating captured older mares with fertility control and will begin releasing them and older studs back onto the range, according to RTF humane observer Steve Paige.

A total of 534 wild horses were captured beginning on Feb. 11. Three wild horses have been euthanized, including a 2-year-old bay mare that the agency’s gather report described as having been lame for two days, with a worsening condition, following her capture.

“She was apparently suffering from a lumbar or pelvic injury that severely restricted her ambulatory gate. When standing still, she was shifting most of her weight to her front legs. Prognosis for her recovery was extremely poor,” according to the report.

BLM had set out to capture up to 700 wild horses before the roundup’s end. Of those, contractors would separate out and permanently remove from their home range 200-300 “adoptable age” wild horses. The other wild horses captured — including about 200 mares that will be treated with PZP-22 fertility control vaccine — were to be returned to the range.

With a smaller number of wild horses captured than planned, it is not immediately clear how many will be released. A total of 300 wild horses had been transported to the Delta (Utah) Wild Horse and Burro Facility as of Monday.