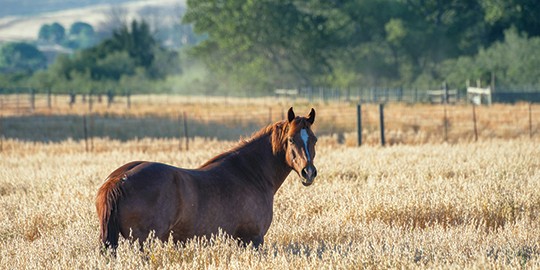 Click here for more information about visiting Return to Freedom’s American Wild Horse Sanctuary. To find out how you can volunteer, please click here.

As published by Westways Magazine 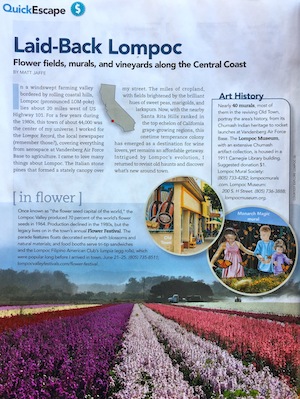 In a windswept farming valley bordered by rolling coastal hills, Lompoc (pronounced LOM-poke) lies about 20 miles west of US Highway 101. For a few years during the 1980s, this town of about 44,000 was the center of my universe. I worked for the Lompoc Record, the local newspaper (remember those?), covering everything from aerospace at Vandenberg Air Force Base to agriculture. I came to love many things about Lompoc. The Italian stone pines that formed a stately canopy over my street. The miles of cropland, with fields brightened by the brilliant hues of sweet peas, marigolds, and larkspurs. Now, with the nearby Santa Rita Hills ranked in the top echelon of California grape-growing regions, this onetime temperance colony has emerged as a destination for wine lovers, yet remains an affordable getaway. Intrigued by Lompoc’s evolution, I returned to revisit old haunts and discover what’s new around town.

In Flower
Once known as “the flower seed capital of the world,” the Lompoc Valley produced 70 percent of the world’s flower seeds in 1964. Production declined in the 1980s, but the legacy lives on in the town’s annual Flower Festival. The parade features floats decorated entirely with blossoms and natural materials; and food booths serve tri-tip sandwiches and the Lompoc Filipino American Club’s lumpia (egg rolls), which were popular long before I arrived in town. June 21–25, 2017. 1-805-735-8511; lompocvalleyfestivals.com/flower-festival. 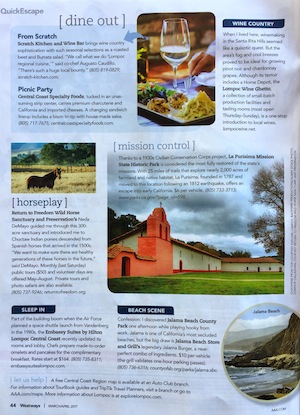 From Scratch
Scratch Kitchen and Wine Bar brings wine country sophistication with such seasonal selections as a roasted beet and Burrata salad. “We call what we do ‘Lompoc regional cuisine,’ ” said co-chef Augusto Caudillo. “There’s such a huge local bounty.” 1-805-819-0829; scratch-kitchen.com.

Wine Country
When I lived here, winemaking in the Santa Rita Hills seemed like a quixotic quest. But the area’s fog and cool breezes proved to be ideal for growing pinot noir and chardonnay grapes. Although its terroir includes a Home Depot, the Lompoc Wine Ghetto, a collection of small-batch production facilities and tasting rooms (most open Thursday–Sunday), is a one-stop introduction to local wines. lompocwine.net.

Mission Control
Thanks to a 1930s Civilian Conservation Corps project, La Purísima Mission State Historic Park is considered the most fully restored of the state’s missions. With 25 miles of trails that explore nearly 2,000 acres of farmland and native habitat, La Purísima, founded in 1787 and moved to this location following an 1812 earthquake, offers an escape into early California. $6 per vehicle. 1-805-733-3713; parks.ca.gov/?page_id=598.

Horseplay
Return to Freedom Wild Horse Sanctuary and Preservation’s Neda DeMayo guided me through this 300-acre sanctuary and introduced me to Choctaw Indian ponies descended from Spanish horses that arrived in the 1500s. “We want to make sure there are healthy generations of these horses in the future,” said DeMayo. Monthly (last Saturday) public tours ($50) and volunteer days are offered May–August. Private tours and photo safaris are also available. 1-805-737-9246; original.returntofreedom.org.

Sleep In
Part of the building boom when the Air Force planned a space shuttle launch from Vandenberg in the 1980s, the Embassy Suites by Hilton Lompoc Central Coast recently updated its rooms and lobby. Chefs prepare made-to-order omelets and pancakes for the complimentary breakfast. Rates start at $164. 1-805-735-8311; embassysuiteslompoc.com.

Beach Scene
Confession: I discovered Jalama Beach County Park one afternoon while playing hooky from work. Jalama is one of California’s most secluded beaches, but the big draw is Jalama Beach Store and Grill’s legendary Jalama Burger, a near-perfect combo of ingredients. $10 per vehicle (the grill validates one-hour parking passes). 1-805-736-6316; countyofsb.org/parks/jalama.sbc.