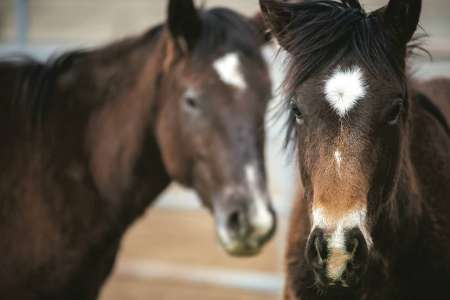 Return to Freedom views bait-and-trap roundups as an improvement over traumatic helicopter roundups, but opposes the capture, separation and permanent removal of wild horses from the range. RTF advocates for humane, on-range management solutions, including the judicious use of the proven fertility control vaccine PZP. View BLM’s full roundup schedule here.

There were 18 horses in the Bureau of Land Management corrals, which are few miles southeast of Challis.

The Becks peered through metal bars at horses eating hay and nuzzling each other in the sunlight.

“They’re so pretty,” Grace said. “I’ve never seen a horse like them before.”

The horses are wild — baited with hay, trapped and gathered from the Challis Herd Management Area in an attempt to control the horse population and preserve balance in the region’s ecosystem.

“If they’re allowed to expand and reproduce unchecked, they can really harm the rangelands to the point where it isn’t suitable habitat for them or other animals,” BLM Wild Horse and Burro Specialist Kevin Lloyd said.

According to genetic testing, horses were first released near Challis in 1899, when locals used the range as an open breeding ground, Lloyd said.

BLM created the management area in 1983 in response to the The Wild Free-Roaming Horses and Burros Act of 1971, which mandated protection and control of free-roaming equines on public lands.

BLM also permits cattle grazing on most of the area from May through October.

Local ranchers’ livestock couldn’t compete with forage-consuming wild horses before the management area was created and populations were actively managed, said Gary Ingram, who has owned a ranch near Challis since 1974, and grazes nearly 500 cattle in the area.

“Horses are out there 24/7, so if you have large numbers, that really deteriorates the resource because it doesn’t have a chance to rest,” he said. “Before they started gathering those horses there was no grass between the sagebrush plants. Now there is.”

BLM also manages horses in the Challis area in relation to other wildlife. Apart from being priority sage-grouse habitat, the area hosts large predators, including wolves and bears, along with herbivores including bighorn sheep, deer and antelope, all of which can be threatened by excess horses.

Managing horse populations can be difficult because adoption numbers have plummeted in recent years, Lloyd said.

BLM cares for about 50,000 horses off-pasture, mostly in privately contracted corrals and ranches. Each horse is estimated to cost taxpayers $50,000 over its lifespan.

Gathers happen every three to five years in the Challis area.

This year, the bureau hoped to gather around 150 horses, adopting off 50 and treating the remaining animals with a fertility control vaccine to curb reproduction. The gather will wrap up at the end of April, but with only 19 horses gathered — one died of malnutrition — BLM won’t meet its quota.

This is the first time the bait and trap method has been used for a widespread gather in the Challis area, and there’s still some kinks to be worked out, Lloyd said. With about 30 to 100 more horses than is appropriate for maintaining the range, BLM will likely need to conduct another gather sooner than usual.

Adoptions from this year’s gather will help in the meantime, however. Wild horse adopters pay a $125 fee. Lloyd showed the Becks around the wild horse corrals Wednesday.

A few geldings had splotches of missing hair where they were wounded on the range. In one pen a couple of fillies stood by what BLM officials assumed was their pregnant mother.

Wednesday, they walked from pen to pen, stopping at one with a couple of clean-looking geldings the family may adopt after they become available.

Adopting a wild horse is a service to the animal, Beck said.

“There’s thousands upon thousands of them just sitting in pens,” Beck said. “You’re not paying thousands of dollars for a domestic horse, and you still have a wonderful animal even if they don”t have a fancy pedigree.”