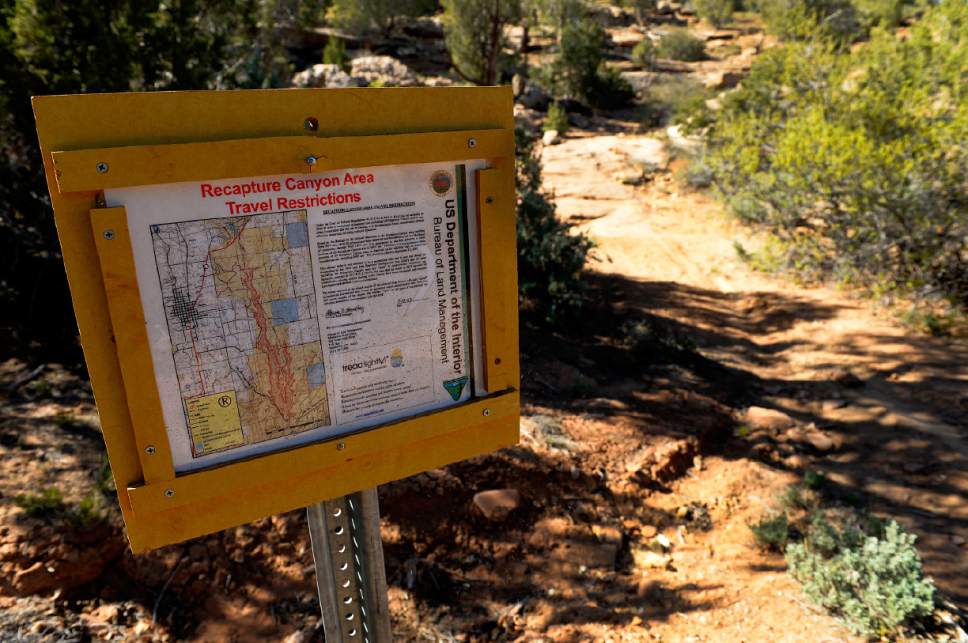 Signs posted from 2007 detail travel restrictions and no motorized use throughout Recapture Canyon in Utah. The canyon, near Blanding is rich in archaeological sites, and has been a sore spot in the long-running debate about motorized access to southeastern Utah’s public lands. Salt Lake Tribune file photo.
2017-05-23T22:49:02+00:00May 23rd, 2017|

Signs posted from 2007 detail travel restrictions and no motorized use throughout Recapture Canyon in Utah. The canyon near Blanding is rich in archaeological sites and has been a the subject of debate about motorized access to Utah’s public lands. Salt Lake Tribune file photo.

Interior Secretary Ryan Zinke said “there’s enough money in this budget” to manage the millions of acres of public lands but said the proposed spending plan focuses on the department’s core missions even as Interior’s overall budget shrinks by $11.7 billion, or about 11 percent.

“Rather than simply adding more land to [the government’s holdings], we want to make sure we take care of what we have,” Zinke said on a conference call with reporters.

Trump’s budget, which Congress is unlikely to take up but reveals the White House’s spending priorities, slashes most departments’ spending, including social services and other government programs that will affect a broad swath of Americans.

Zinke, a former Montana congressman, said Tuesday the budget blueprint would put the federal government on a path to a balanced budget in 10 years and while some cuts may be difficult to swallow, they are needed to focus on what the government should be doing.

“It was not an easy job, there were difficult decisions that were made,” he said. “The budget overall speaks to the core mission of the Department of the Interior.”

Under an executive order Trump signed in April, Zinke has until early June to report back any recommendations on changing or jettisoning the Bears Ears National Monument designation in southeastern Utah and until August to review some 24 other monuments, including the 20-year-old Grand Staircase-Escalante National Monument.

The Interior Department did not respond to a question of whether Trump’s budget cuts to national monuments assumes there will be changes, saying that “no decisions on monuments have been made.”

“This budget is a shameless attack on America’s parks and public lands,” said Jennifer Rokala, executive director of the Center for Western Priorities. “From gutting one of America’s most important parks programs to increasing spending on drilling and mining, it sure looks like this budget was written by oil, gas and coal companies.”

The budget includes $90 million in funds for state grants from the Land and Water Conservation Fund, but otherwise slashes the fund by half, including a 75 percent cut to the land-acquisition program.

“This budget is the reality of the Republican vision for the country, and Republicans in Congress need to admit it,” said Rep. Raul Grijalva of Arizona, the top Democrat on the House Natural Resources Committee. “It treats our environment as a speed bump on the way to greater oil profits and it eliminates any hope of sane climate protections.”