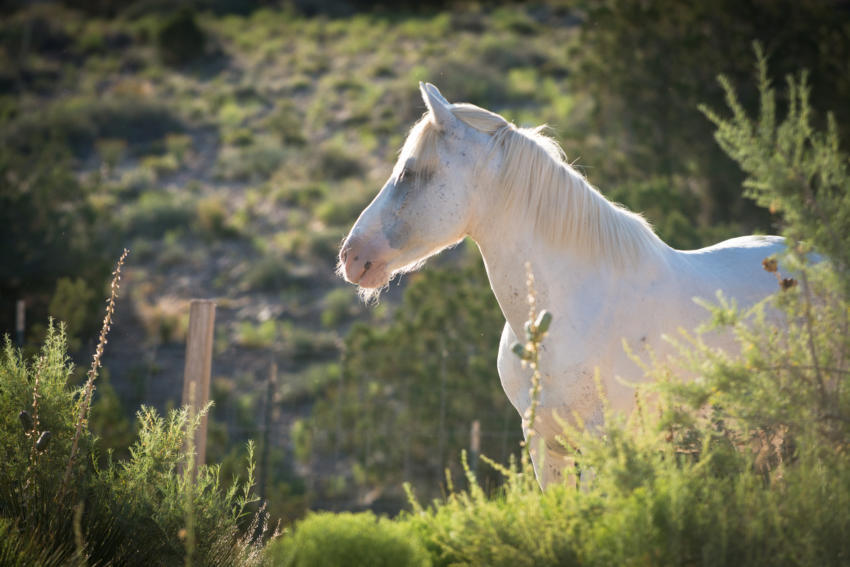 As published by Albuquerque Journal

For all the fuss about “wild” horses, all the money tied up in snarling lawsuits over their place – or lack of one – in the environment, the creatures roaming in pockets across New Mexico endure.

For some, the fact that unowned horses remain on federal, state and other land across the state – and the American West – is a victory for nature, powerful beauty and history.

For others, “wild” is really just abandoned livestock, and the horses’ presence, sometimes bony and malnourished in home gardens or on roadways, is a failure of environmental and private property stewardship and, ultimately, of misguided compassion.

For all, it’s a massive and decades-old controversy that this year cost federal taxpayers about $80 million just for the management of federally recognized wild horses on federal land, at least 615 of which live in New Mexico, according to the Bureau of Land Management.

And that cost doesn’t include the damage to the land and grazing plant ecosystems, often also used by wildlife such as deer and elk, that many say is caused by roaming horse herds.

In New Mexico at least, it’s the local, feral horses, not the federal ones, that are causing the most commotion.

While federal and state law makes distinctions between what it terms wild horses, most people involved in the issue are careful with the terms. The use can define what political side they are on.

Whatever words are used to describe the animals, horses coming off of private, state or public land, except for federally protected wild horses, received the same treatment by the state’s Livestock Board for decades.

But in 2007 with the addition of a new state law and then again in 2015 with a ruling from the state’s Court of Appeals, things changed.

“If you had an animal that showed up on private land that you didn’t own, you could call the Livestock Board and they would come and pick it up and haul it off as an estray,” said Bob Alexander, New Mexico Livestock Board interim executive director. An estray is a lost pet or ranch animal. “They would allow someone to come claim it; if not, then take it to auction and sell them.”

Sometimes that meant the horse was bought by a “kill buyer” who would ship them off to slaughter in Mexico.

Indeed, thousands of New Mexico horses, including domestic and feral, have been purchased at New Mexico and Colorado auctions and sent to slaughter, according to Livestock Board records.

One buyer from Socorro purchased from board auctions and sold to slaughter 4,000 horses from 2006 to 2014.

Outraged at the animals being sent to slaughter, which fuels a horse meat industry both for pet food and human consumption in other countries, horse advocates took action by getting laws passed and filing lawsuits.

“We would have rather seen those horses euthanized humanely by a licensed veterinarian than shoved into a overloaded trailer and shipped to (slaughter in) Mexico or Canada,” said Jessica Johnson of Animal Protection Voters, the legislative arm of Animal Protection New Mexico.

Now, “the resulting predicament of the NMLB includes a potential lawsuit every time the NMLB responds to a call for service of any citizen requesting the NMLB to take possession of animals trespassing on their land (which happens quite often).

“If the animals are not considered ‘livestock,’ then the NMLB would not have jurisdiction to impound the animals; thereby leaving private landowners without the relief they have enjoyed for decades under the estray statutes of the Livestock Code,” the state’s Court of Appeals wrote in a ruling it made in the 2013 court case brought by one of the horse advocacy groups.

In 2007, wild horse advocates worked to get a bill to try to stop horses from going to auction and slaughter.

The bill required the Livestock Board to DNA test and analyze the appearance of horses that come off public land. If determined to be a wild horse, it must be returned to the land or offered for adoption – but not auctioned.

But the law wasn’t very clear, and few DNA tests were run while horse advocates say wild horses were still picked up and sent to auction and slaughter.

In response, the groups made new plans.

One group, Placitas WILD in Placitas, started work on fencing to keep wandering horses out of the village and roads and began planning a horse preserve – a plan that has come to fruition with the help of San Felipe Pueblo.

“They are living things like us. They have feelings. They hurt. They are smart. They have families. And we encroached on them. Why not help them?” said Sandy Johnson, a Placitas resident and one of the leaders of a project to move roaming horses from the village to a nearby preserve to prevent them from being picked up by the Livestock Board.

She is not a part of the Wild Horse Observers Association group that took a different tack in response to the suspected wild horse pick-ups by the Livestock Board.

WHOA, led by two Placitas residents, has, in addition to spearheading the 2007 DNA-testing law, filed the two lawsuits against the board.

One lawsuit from 2016 targets a community feud in Alto, near Ruidoso.

WHOA was able to get a restraining order to stop the board from sending to auction a handful of horses that were picked up on private property. WHOA says the horses were tricked onto the property.

But property owner Caroline McCoy says they willingly followed her into her paddock to eat hay.

McCoy said she has faced a barrage of vicious online character attacks and harassment at her home.

The case is proceeding toward trial.

Farther north, a lawsuit from 2014 targeted neighborhood turmoil over the horses in Placitas.

Placitas is partially abutted by a 560-acre open space park owned by Albuquerque, about 3,000 BLM acres and San Felipe Pueblo land. WHOA in its suit estimates about 40 unowned horses are roaming these lands, grazing and taking food and water set out by Placitas residents.

Some residents, though, do not like the damage they said was caused by the horses. They corralled eight of them and turned them over to the Livestock Board, triggering the WHOA lawsuit and a cascade of unneighborly behavior, including fistfights between the factions and lookouts set up by each side to monitor comings and goings of horse trailers, specific horses and Livestock Board vehicles.

It is this case that triggered the state Court of Appeals ruling in 2015 that has put into question how the Livestock Board responds to calls about possible wild horses.

A 2nd Judicial District judge in 2014 ruled in the Placitas lawsuit that the Livestock Board did have control over the horses.

But in 2015, the Court of Appeals reversed that.

Since that ruling, a handful of legislators have attempted to adjust wording in laws to clear up the issue.

“I just wanted to talk about, who does someone with private land call when they have an animal on them that is not theirs and they want it off?” said Sen. Pat Woods, R-Broadview, who sponsored a bill this year to change the law.

The bill would have classified any roaming horse as livestock and thus under the authority of the Livestock Board. It would have also required the board’s cooperation with horse rescue groups, which would get a first shot at adopting the horses.

Johnson, of Animal Protection Voters, said while the bill wasn’t ideal, it made steps toward a solution.

“As it stands now there is no governmental agency to address wild horse issues on private land. We don’t like that idea because if there is no course of action for private land owners, we know people get frustrated and they can potentiality cause harm to those animals,” said Johnson.

The bill died after facing opposition from WHOA, who said the bill would continue to send wild horses to auction and slaughter by bypassing the 2007 DNA law.

The legislative failure, though, hasn’t stopped the board from working with some of the horse groups, Johnson said.

Bob Alexander with the Livestock Board said the agency didn’t send any suspected or confirmed feral horses to auction last year at all, and instead worked with the horse rescue organizations for adoptions.

Woods said he isn’t sure if he will attempt another bill, though other legislators could also step into the fray.

“We got a problem there, and it’s going to get worse, and I was trying to come up with a solution, but you know how things get political,” Woods said.