How wild horses of the West would die under Trump budget 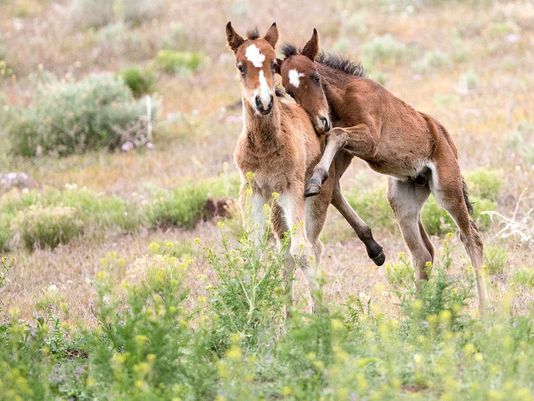 As published by USA TODAY

RENO — Wild horses, a living symbol of the wide-open West, could be killed in greater numbers under a budget proposal from President Trump.

The changes are included in Trump’s proposed budget for the Bureau of Land Management, which seeks an 11% cut to the agency’s $1.1 billion budget. In addition to the overall cut the agency’s budget justification document proposes cutting $10 million and 29 jobs from the Wild Horse and Burro management program, a reduction of 12%.

Trump’s 2018 budget proposal also has less money for birth control and a request to lift rules that prevent the Bureau of Land Management from selling captured wild horses to slaughterhouses that would kill them for meat.

If Congress agreed to the changes it would upend existing policy directing the BLM to minimize avoidable wild horse deaths and prohibit altogether selling the animals for slaughter.

“America is not a horse-eating nation, horses are our partners in work and recreation,” said Suzanne Roy, executive director of the American Wild Horse Campaign.

The BLM and cattle ranching interests say the range is overpopulated with horses and lifting restrictions would reduce the problem.

“We only have so much feed and water out there,” said Dave Stix Jr., president of the Nevada Cattlemen’s Association. “If being able to sell the horses and they end up going to a protein source overseas that is better than having them starve to death on the open range.”

The horse-killing language is included in the 2018 budget justification the BLM submitted to Congress. It asks Congress to “eliminate appropriations language restricting the BLM from using all of the management options authorized in the Wild Free-Roaming Horse and Burro Act.”

The 1971 act calls for the “protection, management and control of wild horses and burros” on federal public land.

Restrictions added in 1988, 2004 and 2010 prohibited destruction of healthy animals and sale of horses to companies that slaughter them for food, the proposal states. Removing the restrictions during the appropriations process would allow for the revival of the practice of selling wild horses for slaughter.

The Interior subcommittee of the House Committee on Appropriations was scheduled to mark up the BLM budget proposal on Wednesday.

Rep. Mark Amodei, R-Nev., is on the committee and expects what ultimately emerges will be “much different” than the administration proposal but didn’t specify how.

Although commonplace in other countries the slaughter of horses for meat has long been controversial in the United States.

Congress has sent mixed messages on the practice with a ban on funding for U.S. Department of Agriculture inspections of horse meat.

Without inspections slaughterhouses can’t produce meat for human consumption. In 2011 Congress removed the ban. Three years later, however, it re-imposed it.

While the ban essentially prevents horse slaughter in the U.S., people who wish to sell horses for meat can still sell to slaughterhouses in Mexico and Canada.

Another way Congress has expressed itself on the matter is through appropriations riders that bar the BLM from destroying healthy horses or selling them to people who would sell them for slaughter. These are the restrictions the administration wants Congress to lift during the budget process.

Separately, the BLM has its own policy aimed at ensuring people who adopt wild horses will provide the animals a good home and won’t sell them for slaughter. The budget request contradicts that policy.

Loopholes in laws against horse slaughter

Advocates against horse slaughter say it’s cruel and violates the will of the majority of American people who oppose it. They prefer to keep wild horses on the range cite polling that shows widespread, bipartisan support for non-lethal controls.

Others say slaughter restrictions contribute to an overpopulation of unwanted horses, domestic and wild, that results in miserable conditions for some animals.

As recently as 2015 a Colorado rancher was found to have purchased 1,700 formerly wild horses from the BLM and sold them into slaughter despite restrictions.

When it comes to what to do with the estimated 73,000 of wild horses and burros already on public land in 10 states opinions vary drastically.

Ranchers, who benefit by grazing cattle on public rangeland, tend to favor authorizing the BLM to take aggressive measures to remove horses. They say horses compete with livestock for forage.

Removed horses end up in BLM or privately-owned holding areas where they can be sold or adopted. There are not enough non-kill buyers or adoptive families to soak up the supply of captive horses and burros, which stands at about 46,000.

Horse advocates tend to favor measures that keep horses alive and on the range, such as programs in which workers administer non-surgical birth control treatments. Although some horse advocates dislike certain forms of birth control. They also accuse the BLM and cattle interests of underestimating the number of horses and burros the range can sustainably support.

In 2013, the National Academy of Sciences conducted one of the most extensive academic reviews of the BLM’s Wild Horse and Burro Management program and found birth control medication to be among the most effective, non-lethal methods the agency could use to manage horse populations.

Applying existing birth control adequately, “does give you the opportunity of maintaining a healthy population on the land,” said Guy Palmer, a Washington State University veterinarian and chair of the National Academy’s horse study committee.

Terri Farley, author of Wild at Heart: Mustangs and the Young People Fighting to Save Them, which was recognized by the National Science Teachers Association and American Association for the Advancement of Science, said the contraception programs have been shown to work and should receive more funding support.

“What they’re saying is they will save $9 million to $10 million by getting rid of the horses in holding,” said Farley, who is also the wife of Gazette-Journal columnist Cory Farley. “If they put that money to contraception it would be the end of the problem.”