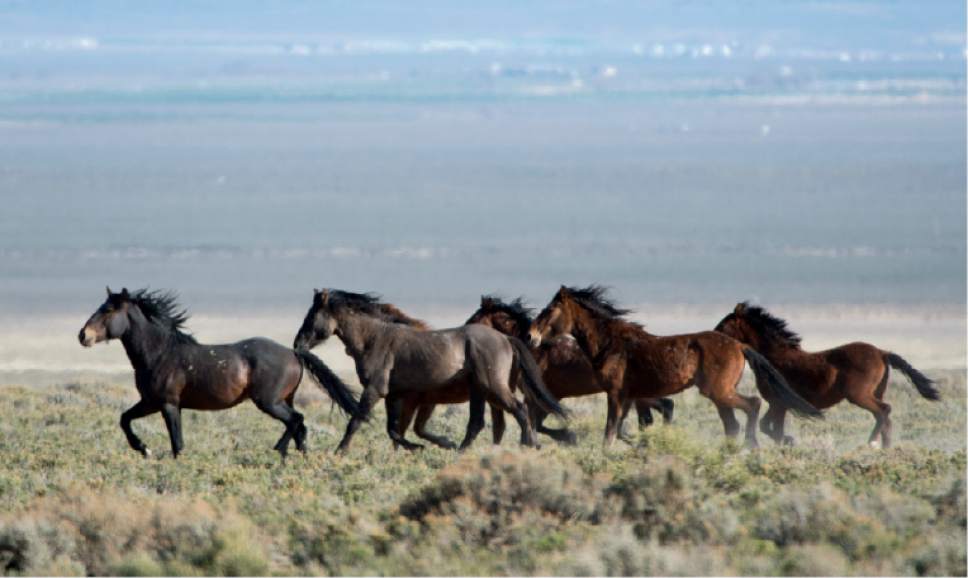 Return to Freedom is proud to share this victory for wild horses with our colleagues the American Wild Horse Campaign, Return to Freedom, the Cloud Foundation and Lisa Friday. Thank you to attorney Nick Lawton of Meyer Glitzenstein & Eubanks LLP.

A federal judge on Tuesday tossed a lawsuit brought by Utah ranchers demanding the Bureau of Land Management remove “excess” wild horses from several areas in the West Desert they say are overrun with free-roaming horses that displace their cattle.

Represented by Karen Budd-Falen, a Wyoming lawyer who sources say is undergoing final vetting to serve as the BLM’s next director, the ranchers argued that federal law requires the removal of horses that exceed population targets the agency has set for particular herd areas. But U.S. District Judge Jill Parrish ruled that roundups are not compulsory, unless certain conditions are met.

“Once BLM determines that an overpopulation in fact exists in a given area, the agency has wide discretion in how it addresses that overpopulation,” wrote the former Utah Supreme Court justice in her ruling. “BLM may address the identified overpopulation through removal or through other methods it deems more suitable.”

In recent years, the BLM has been working with contraceptives as a less costly, more humane alternative to the endless cycle of roundups on Western ranges that have resulted in 50,000 horses incarcerated for life in private pastures off the range.

Current federal law prohibits selling these animals for slaughter to nations where horse meat is commonly used for human consumption, although pending legislation in Congress could relax these restrictions.

The Utah ranchers, angry with BLM requests that they slash their cattle’s time on the public rangelands, formed the Western Rangeland Conservation Association in 2014, pooling their money to bring the lawsuit. The Utah Farm Bureau Federation, national Public Lands Council and Iron and Beaver counties all pledged financial support and filed amicus briefs, while the American Wild Horse Preservation Campaign intervened on the BLM’s side.

The ranchers’ suit sought to compel removals from particular management areas where horse numbers exceed designated “appropriate management levels,” or AMLs, which set high and low target populations. In Utah and many other Western states, horse numbers chronically remain two to three times the upper limits of AML, creating endless conflict with the ranchers who hold grazing allotments in those areas and their allies on rural county commissions.

Beaver County Commissioner Mark Whitney likened the BLM to a gelding because it is “impotent” to meet its legal obligations. The federal agency lacks the resources and tools to properly manage wild horses, which have been protected under federal law since 1973, forcing it to skirt legal requirements, he said.

“Our federal partners can abuse the law and twist it the way they want,” said Whitney, who heads the Utah Association of Counties. “The ones on the range that are over AML, not only destroy the range, they are leading to the demise of their own breed.”

Horse overpopulation also displaces big game by denuding the land of forage, according to declaration filed in the suit by then-director of the state Division of Wildlife Resources Greg Sheehan, now acting director of the U.S. Fish and Wildlife Service.

Parrish, however, concluded the wild horse law — as amended in 1978 to clarify a goal to “achieve and maintain a thriving natural ecological balance on the public lands” — provides no “absolute” or “date-certain deadline” for reducing horse numbers.

At issue in this case are eight herd management areas, another area of mostly state land known as Blawn Wash and private lands encompassed within or lying adjacent to public lands. The eight hose-management areas under scrutiny here are Frisco, Four-Mile, Bible Springs, Sulphur, Choke Cherry, Muddy Creek, North Hills and Swasey. Together, the boundaries of these areas encompass nearly 1 million acres.

“Among other things, BLM’s failure to perform its legal responsibilities of removing identified excess horses from the range has reduced forage and water available for wildlife and domestic livestock, reduced the amount of revenue available for the state and its political subdivisions, and damaged water and wildlife resources within the state,” wrote Assistant Attorney General Tony Rampton in Utah’s amicus brief.

And more harm from excess heard is likely in future, Rampton wrote, “in the form of diseased animals, damaged waterways, overgrazing, loss of permitted rights, loss of revenue, threats to public safety, and private and public property damage.”

Beaver County has a related suit pending before U.S. District Judge Clark Waddoups, calling foul on the BLM’s decision to return gathered horses back onto the range after administering contraceptives to the mares.

The agency, meanwhile, is studying whether this practice can keep horse populations in check, but state officials insist these animals need to remain off-range. The logic of Parrish’s ruling suggests the BLM will prevail in that case, according to Nick Lawton, a lawyer representing the horse-advocacy group that intervened in the Western Rangeland case.

“It should be an important persuasive precedent that helps to explain why the Beaver County case lacks merit,” Lawton wrote in an email.

Return to Freedom selectively litigates against actions which would set dangerous precedent to threaten America’s wild horses and burros.