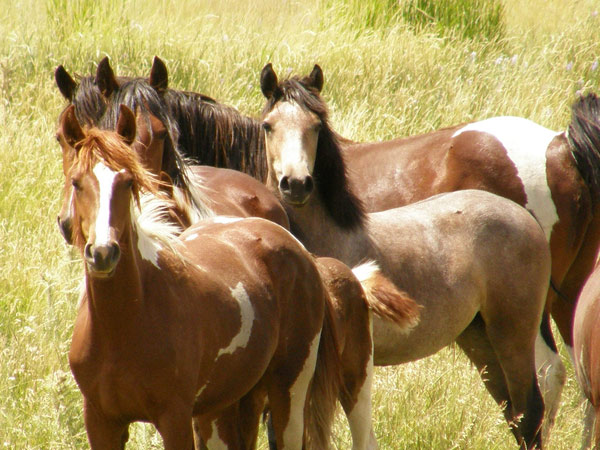 The House Appropriations Committee has altered a spending bill in a way that opens the door to the potential slaughter of tens of thousands of captive American wild horses.

The Humane Society of the United States (HSUS) says a few western lawmakers succeeded in getting the committee to accept, on a voice vote, an amendment that could allow the destruction of wild horses. It accused them of exaggerating the impact of wild horses on federal lands in the west, where they are managed by the Bureau of Land Management (BLM).

The move amounted to a reversal in policy, the nonprofit group said.

Central to the issue is the growing number of wild horses being held in captivity in order to control numbers on the range. The agency has contracts for the care of more than 46,000 horses. It is a strategy that has placed its wild horse management budget under increasing strain, with the majority of funds going to the animals’ care.

The agency has sought the right to sell the horses without limitation, which means buyers will have no obligation to provide guarantees that the animals will not go to slaughter.

Wild horse advocates fear the move, if approved by the House and Congress, could see wild horses go to slaughter in Mexico and Canada by the truckload.

The amendment was offered by US Representative Chris Stewart, R-Utah, whose effort, according to the HSUS, weakened long-accepted bipartisan provisions that prevented the killing of healthy wild horses and burros.

The amendment countermanded the language that has lived in the Interior spending bill for years to safeguard wild horses and to require humane management on and off the range.

“Last week, the House Appropriations Committee voted to use taxpayer dollars to open horse slaughter plants in the US,” noted Wayne Pacelle, president and chief executive of the HSUS.

“This week, they’re on a tear to kill wild horses. Let’s hope the full House and the Senate remind them of Americans’ special relationship with horses as well as our ability to manage wild horses in humane, cost-effective ways.”

The group Return to Freedom Wild Horse Conservation described the passed amendment as shortsighted and said it would throw open the door to large-scale killing of wild horses.

“It would excuse the BLM for creating a crisis by perpetuating a broken system of capturing and removing horses from the range while all but ignoring proven, humane management alternatives,” it said in a statement.

“It would hand a victory to those who profit from our public land resources while blocking common-ground solutions and working hard to convince Congress that horses alone are responsible for damaging the range – no matter that the number of wild horses remains dwarfed by livestock – and that no other solutions exist.

“Worst of all, this amendment would use our tax dollars to shoot wild horses and burros in whose promised protection Americans have invested millions of dollars.

“As Americans, we hold a special place in our hearts for the descendants of horses and burros that helped build our country. Once again, we must stand up and let our senators know that we expect thoughtful leadership − not needless killing.”

It said it would continue working with the Senate to advance humane alternatives.

The BLM has pursued a strategy of mustering wild horses from the range and keeping them in captivity as its primary population management method for 20 years.

The National Academy of Sciences reported in 2013 that such removals caused an increase in population growth rates in the remaining horses on the range due to decreased competition for forage. It instead recommended that the agency increase its emphasis on fertility control.

The BLM has used fertility control in only a limited way, despite pleas from some sectors of the horse protection community, including the HSUS.

Last year, the agency treated less than 1 percent of the horses on the range with immunocontraception.