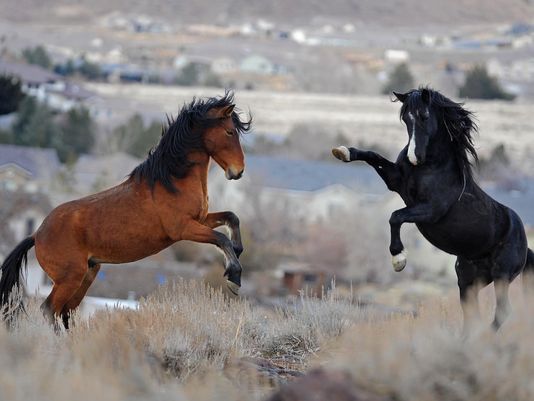 As published by the Reno Gazette-Journal

Wild horses have long been a symbol of the American West, and Nevada is home to more than half, almost 35,000 at last count.

Yet the horses and wild burros, on about 27 million acres in 10 Western states, have not been managed well. Costs have grown to handle them, jumping from $20.4 million in 2000 to $80.4 million this year for the Bureau of Land Management.

Enter President Trump’s 2018 budget proposal. It seeks to save $10 million a year by allowing some of the animals to be sold for slaughter and others to be outright killed, with the ensuing reduction in population reducing the number of costly roundups conducted. Horse and burro birth control programs would also be cut.

The debate over wild horses and burros often pits animal advocates and ranchers against each other, arguing over whether cows or horses cause more damage to the range. They both play on emotion. Horse advocates tap into Americans’ seemingly innate distaste at the thought of butchering and eating horses (or turning them into pet food), while ranchers point to horses being at risk of starvation and severe thirst because their populations are increasing while sources of forage are decreasing.

Without getting into those debates, the slaughter proposal should be rejected for two other reasons.

First, the decision is mostly being made by politicians back East who do not fully understand the still-meaningful legacy of wild horses and burros and who have not fully vetted the implications of the budget proposal. To them, the issue seems to appear as little more than numbers on a ledger.

Second, a good long-term solution to rising horse and burro populations has never been fully and properly implemented: birth control.

“In 2013, the National Academy of Sciences conducted one of the most extensive academic reviews of the BLM’s Wild Horse and Burro Management program and found birth control medication to be among the most effective, non-lethal methods the agency could use to manage horse populations.

“Applying existing birth control adequately ‘does give you the opportunity of maintaining a healthy population on the land,’ said Guy Palmer, a Washington State University veterinarian and chair of the National Academy’s horse study committee.”

And, yet, the budget proposal actually calls for cuts to funding for this birth control while increasing the opportunity for slaughter. It shows a disconnect with what’s happening on the ground in Nevada.

Congress saw fit in 1971 to pass the Wild and Free-Roaming Horses and Burros Act, proclaiming these animals should be protected as “living symbols of the historic and pioneer spirit of the West.”