‘Oops’ is no defense, court says in nixing horse decision 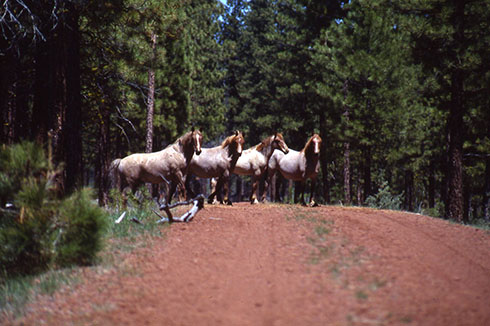 A federal court on Friday tossed out the Forest Service’s attempts to correct a decades-old map error that expanded wild horse territory in a California national forest.

In 2013, the agency redrew the wild horse territory in Modoc National Forest, removing a middle section that had been added inadvertently in a Forest Service map in the 1980s.

But the U.S. Court of Appeals for the District of Columbia Circuit found that the agency unlawfully “swept under the rug” two decades of forest management policy that included the middle section and failed to adequately consider the environmental impacts of its decision.

“There is no ‘oops’ exception to the duty of federal agencies to engage in reasoned decisionmaking,” Judge Patricia Millett wrote for the court.

The federal government has protected and managed wild horses in the Devil’s Garden section of Modoc National Forest in Northern California since 1975. Originally, the wild horse territory in the forest consisted of two separate tracts of land totaling 236,000 acres.

But sometime in the 1980s, the Forest Service issued a map that added in a 23,000 tract of land between the two sections, linking them into a 258,000-acre contiguous territory.

For more than two decades after the “cartographic confusion,” as Millett wrote, the service managed the territory as a single tract. Notably, the service in 1991 adopted a forest management plan for the area that included the middle section.

Then, in 2013, the agency declared that the expansion in the 1980s was an administrative error and that it would go back to managing the wild horse territory as two separate tracts.

Wild horse advocates arrayed under the American Wild Horse Preservation Campaign sued, arguing that the agency violated a number of environmental laws and failed to justify its decision to abruptly cut out the middle section from its management policies.

The U.S. District Court for the District of Columbia had granted summary judgment in favor of the federal agency, which said it wasn’t taking any new action, merely fixing a past mistake.

A three-judge panel of the D.C. Circuit on Friday reversed the ruling.

“The Service’s attempt to slam shut the barn door after the horse already bolted is not sufficient,” Millett, an Obama appointee, wrote in the opinion for the court.
According to the court, the service’s decision was arbitrary and capricious in part because it bucked Supreme Court precedent that says an agency must, at a minimum, acknowledge it is changing a policy and offer a reasoned explanation.

The court also found that the Forest Service was required to consider whether to prepare an environmental impact statement under the National Environmental Policy Act in 2013 when it changed the boundaries of the wild horse territory.

The service’s argument that nothing changed with the 2013 remapping “flatly defies the plain text of the official 1991 Forest Plan, repeated official agency statements, and two decades of agency practice,” Millett wrote. “Blinders may work for horses, but they are no good for administrative agencies.”

And the service’s argument that the inclusion of the middle section must be ignored because it lacked legal authority to add it in the 1980s “never even leaves the starting gate,” Millett wrote.

Even if the Forest Service never intended to expand the territory, “after-the-fact claims about agency intentions do not work when agency actions evince the opposite,” the judge said.

Bill Eubanks, a partner at Meyer Glitzenstein & Eubanks LLP who represented the wild horse campaign in the case, called the decision a “stinging rebuke” and a “pretty clear message” that federal agencies have to give compelling reasons when they divert from past public lands practices.

“You can’t just make these decisions off the cuff,” Eubanks said in an interview Friday. “There’s a planning process, you have to go through public comment. I think it has some far-reaching consequences for the intensifying public lands debate.”

The DC Circuit Court of Appeals decision can be found here.

To hear a recording of oral arguments, please click here.