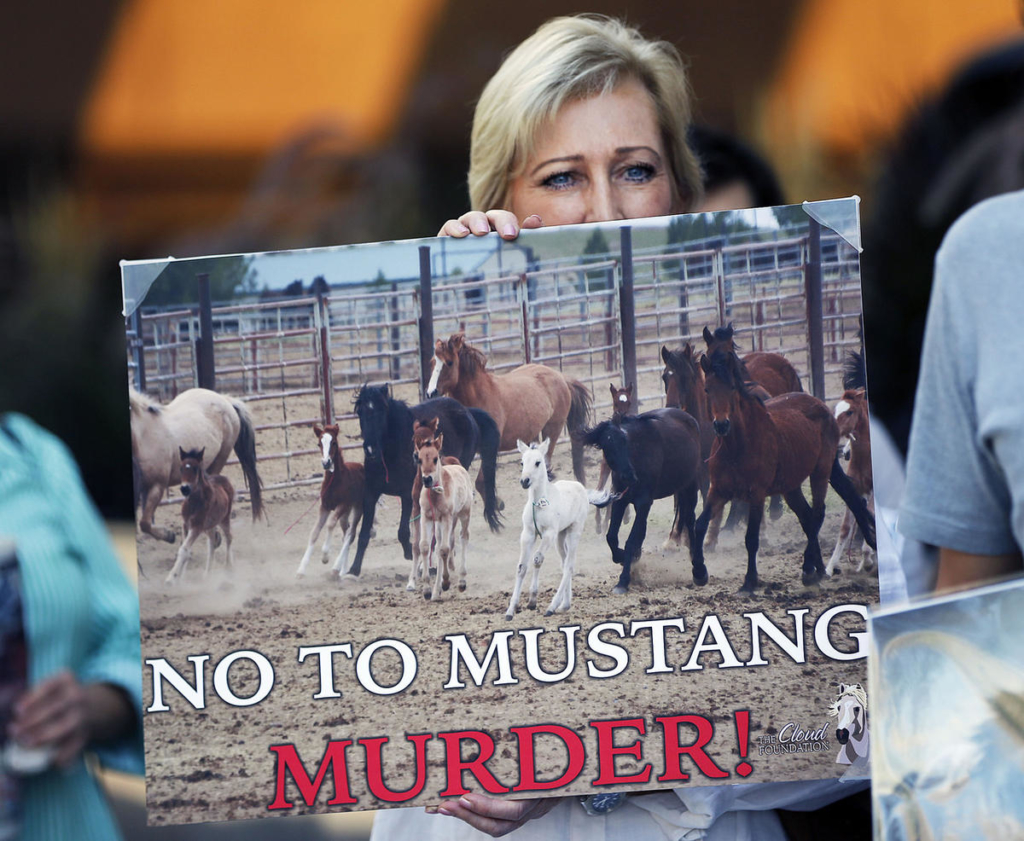 As published by Deseret News

SALT LAKE CITY — Rick Danvir with the Western Landowners Alliance told a crowd of several hundred people Wednesday that he was lucky in his early association with the wild horse of the West, working on the ground to conserve the species and boost its numbers.

That was in the aftermath of a national act in 1971 to protect the dwindling wild horse and burro populations — which now dramatically eclipse federal management levels and speak emphatically to the success of the early conservation program.

“It seems the reward to good conservation is now you have to go and figure out how to manage them,” Danvir said. “Good luck.”

As of March, the Bureau of Land Management logged 72,614 wild horse and burros on rangelands in Western states — above the targeted goal of 26,674.

That total does not include the spring foal crop, and with the ability to increase their numbers between 15 percent and 20 percent each year, experts estimate there are 15,000 more animals scattered on nearly 27 million acres of public lands in 11 Western states, including Utah.

Utah Gov. Gary Herbert, who opened the conference, said the problem is posing economic hardship on rural communities, to livelihoods of ranchers and farmers and fails to respect the taxpayer’s dollar.

“This is not sustainable and needs a solution. It’s necessary for us to come together and do some of our best thinking. Clearly what we are doing right now is inhumane to the horses and burros,” he said.

But representatives from wild horse advocacy organizations say the management levels set by the federal agency are arbitrary and a result of greatly reduced rangeland available for the animals.

In Utah, for example, only 10 percent of the federal BLM land is set aside for wild horses — even though their critics try to convince the public the animals’ numbers out are of control, said Ginger Kathrens, executive director of the Cloud Foundation.

“This is a smoke screen,” she said.

Kathrens and other advocates gathered on a sidewalk outside the summit and pressed their point for the need of massive reform in wild horse management.

Horse herds have been reduced in Nevada, Kathrens said, because of water needed for massive solar developments, which she said tells a different story contrasting the “overpopulation” argument — a story summit participants don’t want the public to hear.

But even Kathrens and summit presenter Keith Norris, with the National Horse and Burro Rangeland Management Coalition and the Wildlife Society, agreed on one thing: what is happening now can’t persist.

Norris said the BLM spent $370 million over five years to manage a wild horse population that continued to increase.

In fiscal year 2016, the agency spent $50 million of its $80 million budget to pay for long-term holding of unadoptable animals, which number close to 45,000.

Strapped for financial resources and managing animals that double in population every four to five years, the federal agency is mired in an untenable situation with no relief in sight. It’s estimated that wild horse management will reach $1 billion if it continues unchanged.

Norris said a 2010 appropriations bill includes a section that forbids the destruction of healthy animals or commercial processing of any kind — such as for horse meat, which is a delicacy in some foreign markets.

Wild horse advocates say the American public won’t buy off on the mass slaughter of wild horses, with the optics presenting an array of unpalatable scenarios.

“The specter of killing 45,000 healthy horses by traditional veterinary methods is unimaginable,” said Julie Weikel, a large animal veterinarian and member of the National Wild Horse & Burro Advisory Board.

Weikel teaches owners of domesticated livestock and horses how to euthanize their animals so she knows what methods are employed. She also serves as the wild horse advocate on the BLM’s Resource Advisory Council for southeast Oregon and is a consultant for the U.S. Fish & Wildlife Resources, which lacks a federal mandate for wild horse management.

Some advocates argued that cattle are the real problem to rangeland health, but Weikel and other summit participants said that assertion is no more than a red herring.

“If tomorrow if every single (animal unit) was converted to horse use, it would not solve the problem,” she said, noting that an analysis she’d undertaken shows only 2.2 percent of the mother/calf herds in the United States are on public lands.

Both she and Danvir said it isn’t an argument of cattle versus horses.

“Removing cattle from public lands simply kicks the can down the road, delaying the problem of overpopulation” among wild horses and burros, Danvir said.

The issue is a political flashpoint in the West, where ranchers and wildlife advocates say the wild horse population has been allowed to run amok to the detriment of the species, wildlife and the ecosystem.

Utah lawmakers last year approved a legislation urging the federal government to allow the states to manage the animals.

Members of Congress from Western states have also introduced legislation to give states greater authority over wild horses, including Rep. Chris Stewart, R-Utah, who put a rider in an appropriations bill to authorize lethal disposal of excess animals.

About 130 groups are represented in the first-ever summit looking to address the wild horse issue. The summit was organized by Utah State University along with a steering committee featuring diverse members, including a representative from the Theodore Roosevelt Conservation Partnership.

Ed Arnett, a wildlife biologist and the partnership’s senior scientist, said the overpopulation of wild horses and burros is concerning for sportsmen such as anglers, hunters and the entire outdoor recreation economy as whole.

Beyond the competition the animals bring for wildlife, too many horses on the rangeland impair ecosystems for animals struggling to thrive — including greater sage grouse.

“It is so painfully obvious given the statistics and the biology of animals,” Arnett said. “The administrative options seem to be exhausted. Congress should allow the BLM to manage the population.”

But the notion that wild horses are starving and suffering on the range is one contrived by those who do not favor the space they occupy on federal lands,

“Please take it from us, that if wild horses were starving in any way, we would be the first to tell you about that,” said Simone Netherlands with the American Wild Horse Campaign. “We have seen thousands of horses coming off the range in beautiful condition. Please don’t fall for that.”