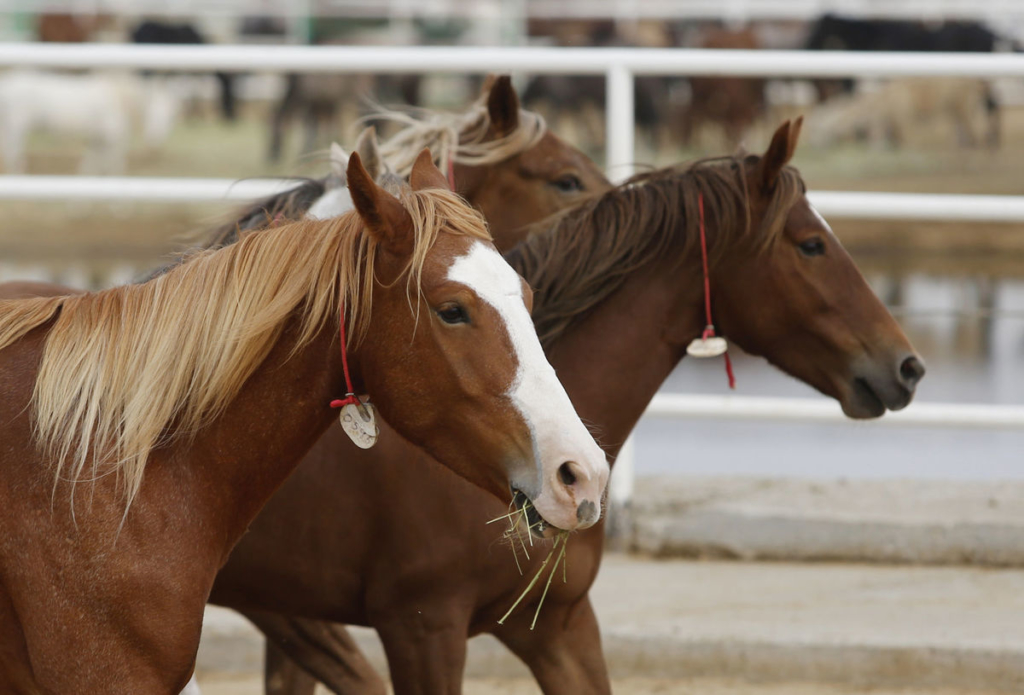 Wild horses rounded up from BLM lands in Wyoming run around a corral Friday at the Wyoming Honor Farm in Riverton, where minimum-security inmates train mustangs for sale to the public. Casper Star-Tribune photo.

As published by Casper Star-Tribune

U.S. Rep. Liz Cheney of Wyoming is backing the Trump administration’s request to allow the slaughtering of wild horses for meat in order to control growing herds. Cheney voted against a measure last week that would have barred the Bureau of Land Management from killing healthy horses or selling them to be slaughtered.

Wyoming has the second-highest wild horse population in the country. The herds, which are about twice the size approved by the BLM, have been the subject of litigation between horse advocates and livestock operators along the Interstate 80 corridor.

“The BLM has failed for many years to effectively manage these horses,” Cheney said in a statement. “Their population has exploded causing extensive ecological damage to Wyoming land and resources, threatening our livestock and resulting in unsustainable conditions for the horses.”

Wyoming currently has 7,144 wild horses compared with the BLM’s target of 3,725.

“BLM simply doesn’t have the capability of dealing with the number of wild horses,” he said.

The BLM has long struggled to control both the size and location of the herds in Wyoming and across the West. Wild horses and burros are protected under a federal law passed in 1971, and the agency is tasked with maintaining appropriate populations of the animals. When overpopulation occurs, the BLM has sought to implement various forms of birth control as well as rounding up herds and offering horses for adoption.

But these tactics have failed to appease horse advocates or livestock operators. Advocates insist that the population targets set by the BLM are unreasonably low while the agricultural industry argues that the herds are in fact overpopulated and wreaking havoc on the range.

Magagna said that while adoption was a good practice, the total numbers accommodated by the program has flagged in recent years.

Meanwhile, despite the recommendation of an advisory board last year, the BLM has declined to euthanize healthy wild horses or sell them to be slaughtered because of public opposition. According to a poll sponsored by the American Wild Horse Advocacy Campaign, which opposes euthanizing the animals, 75 percent of Americans oppose Congress allowing the BLM to kill healthy wild horses. Eighty-six percent of Trump supporters opposed euthanizing the horses.

But in May, the Trump administration unveiled a proposed budget that would slash $10 million and 29 positions from the Interior Department’s wild horse program along with cutting funding for birth control and requesting that the BLM be allowed to sell wild horses to be killed for meat.

AWHC director Suzanne Roy said that while the idea has been considered in the past, this was the first year that an administration actually requested that the ban be lifted.

Roy and her organization advocate for birth control as a way to manage herd size and also argue that the population goals set by the BLM are outdated and unrealistic.

“When there is a humane solution out there on the table, it’s just completely unjustified to call for mass killing of federally protected wild horses and burros,” she said.

Roy said the administration’s request and the agreement of Republicans in Congress is the culmination of a campaign by the livestock and agriculture industry to allow for the slaughter of wild horses.

But Dave Duquette, equine representative for the hardline animal agriculture advocacy group Protect the Harvest, said that Roy and others with similar views want to prevent the BLM from taking any action to manage wild horse herds.

Duquette said that all options, including euthanasia and selling wild horses for meat, need to be on the table. He said Protect the Harvest is “100 percent supportive” of Cheney’s stance.

(The organization is funded largely by Lucas Oil Products. CEO Forrest Lucas was floated as a potential pick to lead the Interior secretary and has described himself as an opponent of “radical” animal rights groups.)

Duquette said that wild horses damage land to the point that sheep and cattle are unable to adequately graze. Even removing livestock from public lands would not allow the range to support growing wild horse herds, he said.

According to the BLM, wild horse herds double in size every four to five years because they have no natural predators.

Roy believes that groups like Protect the Harvest want to reintroduce horse slaughter on a large scale for economic reasons. But she said there is a second factor: Horse advocates and those in the livestock industry tend to have different views of the animals.

“It’s more of a philosophical sort of conflict, which is that they view horses as livestock. And what do you do with livestock? You round them up and harvest them,” Roy said. “But that point of view is out of step with the vast majority of Americans.”

Cheney sits on the powerful House Rules Committee, which has significant control over what measures are voted on by the full House. Cheney voted with the Republican majority on the committee last week to bar consideration of an amendment with bipartisan sponsors that would have renewed the ban on allowing healthy wild horses to be slaughtered.

Rep. Jared Polis, a Democrat representing the Front Range in Colorado, said that this was the committee’s last chance to stop wild horses from being killed.

“There are proven more humane, cost-effective ways and more effective ways of managing horse populations … than the incredibly costly and inhumane slaughter of horses and wild burros, which could commence immediately — Oct. 1,” he said during the debate last Wednesday.

Another Democratic representative, Alcee Hastings of Florida, said that Republicans on the Rules Committee were refusing to allow the slaughter ban amendment to reach the full House for a vote because they knew it would pass with bipartisan support.

“My hope would be that all of y’all that vote that we should have horse slaughter … I hope you end up having to eat horse,” Hastings said.

Cheney did not speak during the debate.

The Senate must still approve the measure granting BLM the ability to euthanize wild horses and sell them to be slaughtered for meat.