Wild Horse and Burro Advisory Board meeting set for Oct. 18-19 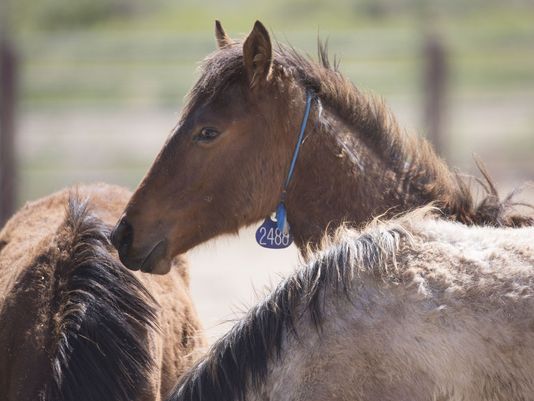 Horses stand in the Bureau of Land Management's National Wild Horse and Burro Center at Palomino Valley, outside Reno, Nevada, where horses captured from public lands are offered for adoption or prepared for trucking to leased pastures on the Great Plains. Photo by Pat Shannahan / The Arizona Republic
2017-09-14T17:40:27+00:00September 14th, 2017|

The National Wild Horse and Burro Advisory Board will meet Oct. 18-19 in Grand Junction, Colorado — the board’s first meeting since recommending that the Bureau of Land Management euthanize captive wild horses and burros.

On both days, the board will meet from 8 a.m. to 5 p.m. at the Grand Vista Hotel. On Oct. 17, members are scheduled to take a daylong tour the Little Book Cliffs Herd Management Area.

In September 2016, members of the Advisory Board attracted national headlines — and an outraged response from wild horse supporters — for voting to recommend that the BLM use euthanasia to reduce the number of so-called “unadoptable” wild horses and burros in long-term holding facilities.

Members of the board said that they did so to force Congress’ hand on the wild horse issue. Wild horse advocate Ginger Kathrens of the Cloud Foundation cast the lone “no” vote on the recommendation.

Responding to public pressure, BLM officials quickly issued a statement saying that the agency had no plans to change its policy. The agency will formally respond to the recommendation at the upcoming meeting.

In the time since, the push to euthanize — shoot — wild horses and burros has gathered momentum.

In May, President Donald Trump made euthanizing captive wild horses and burros and their unrestricted sale part of his 2018 budget proposal. So far, the removal of protection on sales, which would allow kill buyers easy access to captive animals, has not been included in appropriations bills, but, in July, the House Appropriations Committee voted to approve an amendment by Rep. Chris Stewart, R-Utah, that would allow BLM to kill healthy unadopted wild horses and burros.

Earlier this month, a bipartisan amendment that would restore a prohibition against killing healthy horses was rejected by GOP members of the House Rules Committee before the full House could vote on it.

The Advisory Board was set to meet in the spring before new Interior Secretary Ryan Zinke suspended more than 200 public advisory boards, requiring them to report back on their recent work so that he could determine their usefulness.

The independent Wild Horse and Burro Advisory Board’s task to provide “advice concerning the management, protection and control of wild free-roaming horses and burros on public lands” overseen by the BLM and U.S. Forest Service.

The board will include three new, as-yet-unannounced members when it meets in October. The three-year terms of Robert Cope (natural resources management), Sue McDonnell (wild horse and burro research) and Fred Woehl, Jr. (public interest) expired in April.

The BLM accepted nominations for new board members until February 2016. The BLM director, in consultation with the chief of the U.S. Forest Service, will submit to the Interior and Agriculture secretaries a list of recommended nominees. The secretaries have the option to name board members not included on the list.

Public comments may be submitted to the Advisory Board at whbadvisoryboard@blm.gov. Please include “Advisory Board Comment” in the subject line of the e-mail.