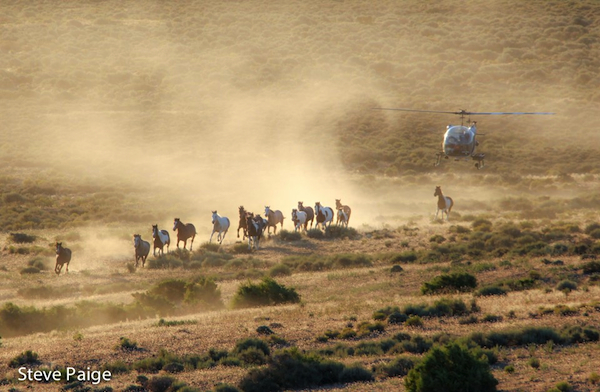 A contractor's helicopter pursues wild horses during a roundup at the Frisco Herd Management Area in July 2016. BLM plans to capture more wild horses there starting on Saturday, Jan. 7, as part of population control research at the Frisco and Conger HMAs.
2017-09-15T17:31:12+00:00September 15th, 2017|

The Bureau of Land Management captured 46 wild horses on Thursday during the first day of helicopter drive-trapping near the Piceance-East Douglas Herd Management Area in Colorado. One foal was euthanized.

The BLM’s goal is to remove 100 wild horses from private land and other areas outside the HMA. Captured wild horses will be transported to BLM’s Canon City, Colorado, holding facility, where they are to be made available for adoption or sale.

According to the veterinary report, a 4-month-old chestnut colt with a right knee swollen to twice the size of its left trailed other horses driven into the trap. Convinced the foal was unlikely to respond to treatment or recover pain-free from what was deemed a pre-existing injury, the decision was made to put the colt down. A necropsy later showed that colt’s knee was almost immobile.

The other wild horses captured were assigned a body score of 5, or moderate, on a 10-point scale.

The BLM estimates that there are 210 wild horses outside of the HMA. Its Aug. 11 Decision Record leaves open the possibility of future roundups of wild horses that have strayed from the HMA.