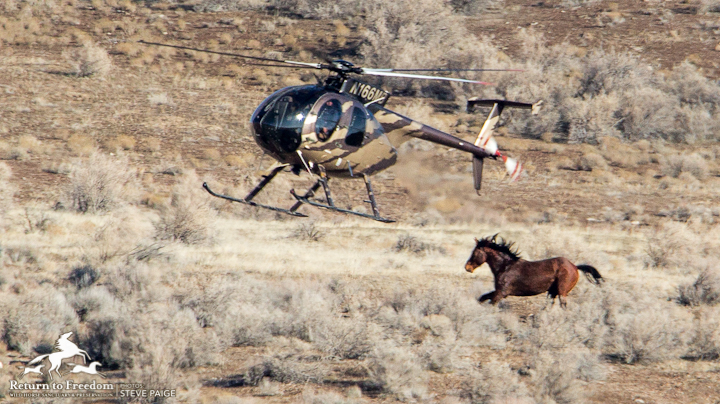 A contractor’s helicopter pursues a wild horse during a February roundup at the Cedar Mountain Herd Management Area in Utah. RTF file photo by Steve Paige.

Update: BLM ended the roundup on Tuesday after transporting the last of the 86 captured wild horses to its Canon City, Colorado, holding facility.

The Bureau of Land Management captured five wild horses during in its fifth day of helicopter drive-trapping on Monday near the Piceance-East Douglas Herd Management Area in Colorado, increasing the total number of wild horses removed from the range to 86.

BLM’s goal is to remove 100 wild horses from private land and other areas outside the HMA. So far, 70 wild horses have been transported to BLM’s Canon City, Colorado, holding facility, where they are to be made available for adoption or sale.

For the fifth straight day, the wild horses captured were assigned a body score of 5, or moderate, on a 10-point scale.

No injuries were reported on Monday, according to BLM. Last Thursday, a 4-month-old colt was euthanized after the discovery of a knee injury.