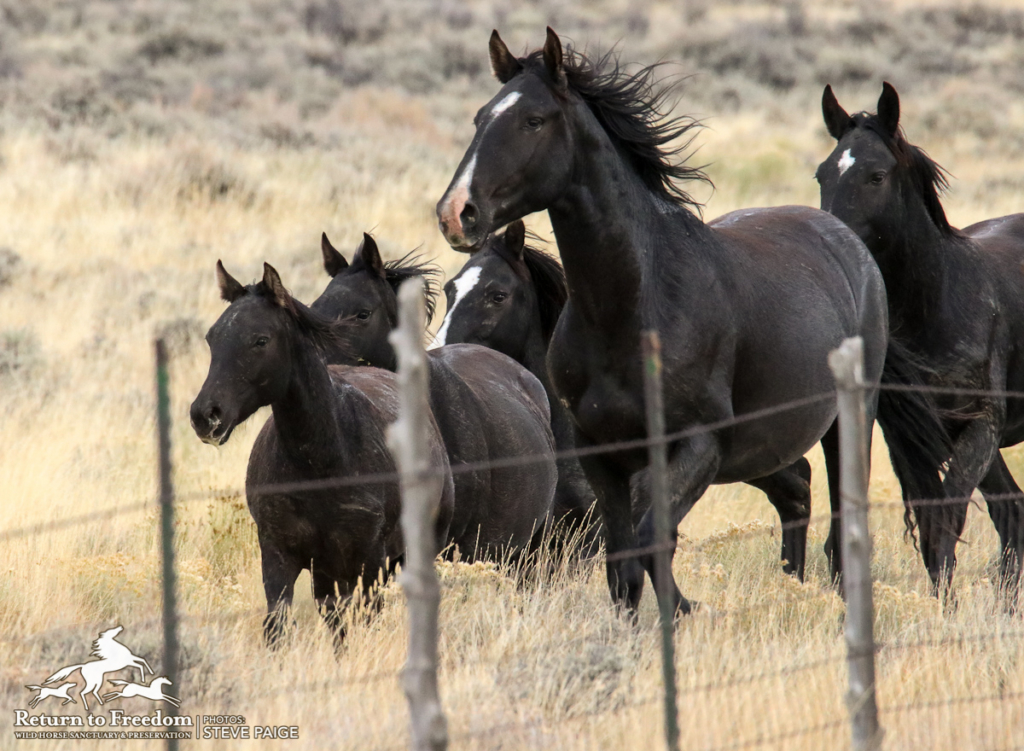 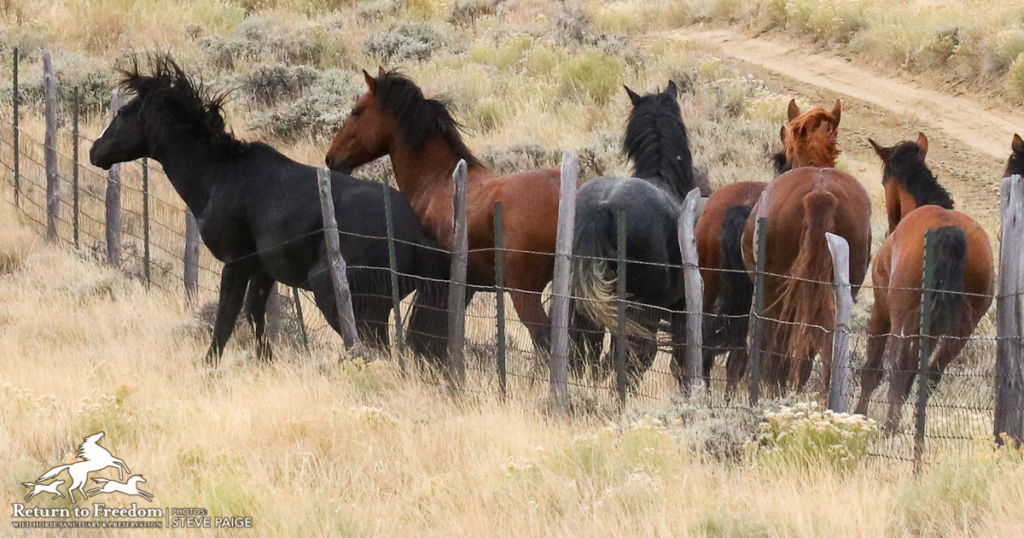 A wild horse attempts to get through a barbed wire fence on Saturday. All photos by Steve Paige.

Wild horses tangled with a barbed wire fence on Saturday while fleeing from a Bureau of Land Management contractor’s helicopter at the Great Divide Basin Herd Management Area in Wyoming.

Seventy-six adults wild horses and 19 foals and weanlings were captured. That brought the total captured over six days as part of the the Salt Wells Creek / Great Divide Basin / Adobe Town heard management areas roundup in southwest Wyoming’s Checkerboard region to 302 adults and 84 foals and weanlings.

Three horses were euthanized on Saturday due to preexisting injuries “with a hopeless prognosis for recovery,” according to BLM:

Theirs bring the reported number of deaths since the start of the roundup to seven.

Also on Saturday: One in a family band of black wild horses racing away from the trap site leaped a barbed wire fence and a second broke through the top wire before escaping. The contractor’s then helicopter appeared, horses scattering in all directions.

Another group of wild horses tried the fence. A black horse in the lead got tangled in the barbed wire. The group then turned away from the fence when the helicopter backed off.

BLM then told the only two public observers — RTF humane observer Steve Paige and fellow photographer Carol Walker — to move back from the spot about 1.25 miles away from the trap where they had been allowed to shoot to another spot much further away.

It was the second time since the roundup began that a trap site was set up not far from a barbed wire fence that has not been flagged in any way to discourage wild horses from going near it.

BLM plans to capture and remove 1,560 adult wild horses from their home ranges on the Salt Wells, Adobe Town and Great Divide Basin Herd Management Areas. In an unusual move, BLM is not counting wild horses under age 1 that it is capturing against its goal of capturing 1,560 wild horses.

At roundup’s end, 21 mares are to be released after being collared as part of a movement study. The other captured wild horses will be transported to the Rock Springs Wild Horse Holding Facility, including 84 that were shipped on Saturday. They will be offered for adoption, and those that are not adopted will be moved to long-term pastures, according to BLM. 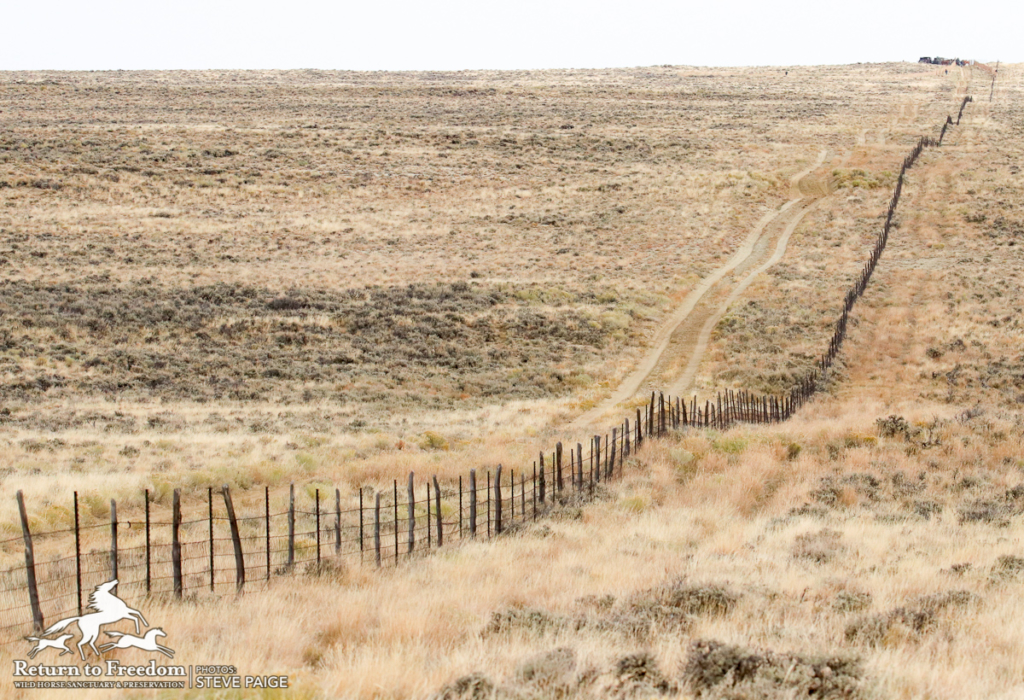 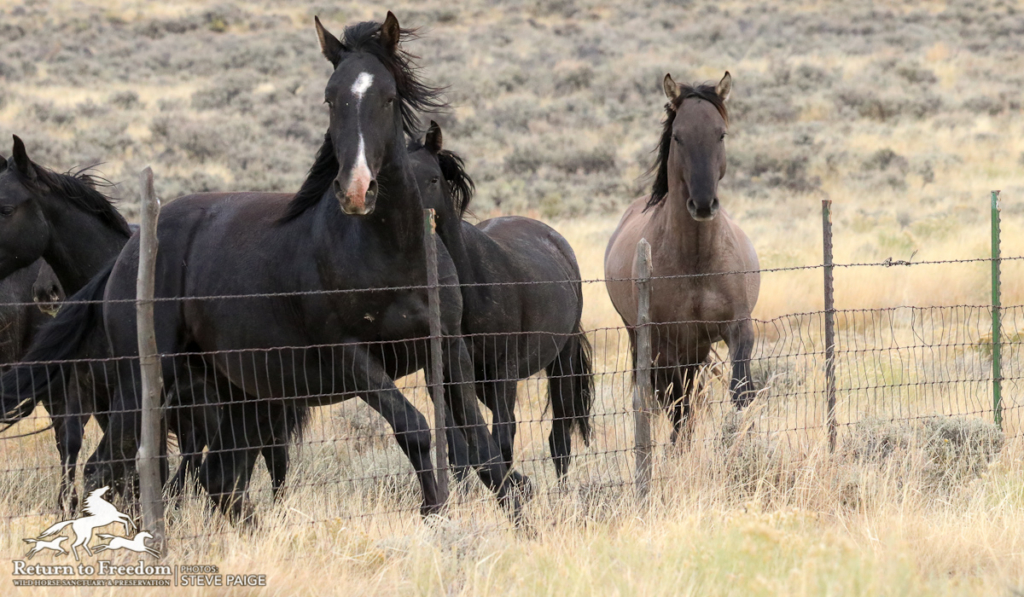 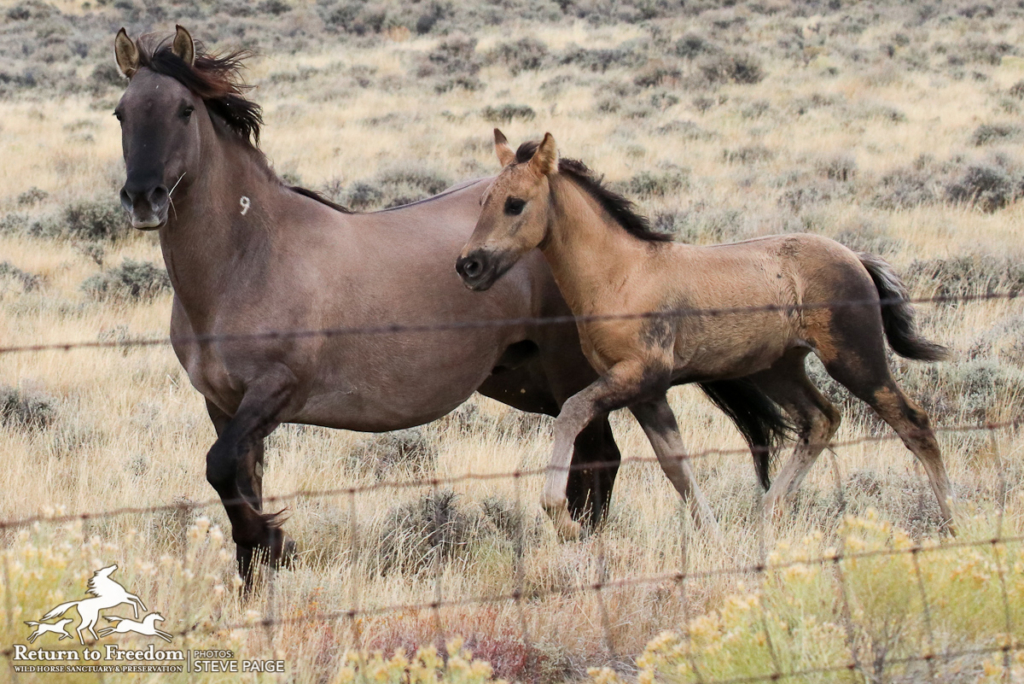 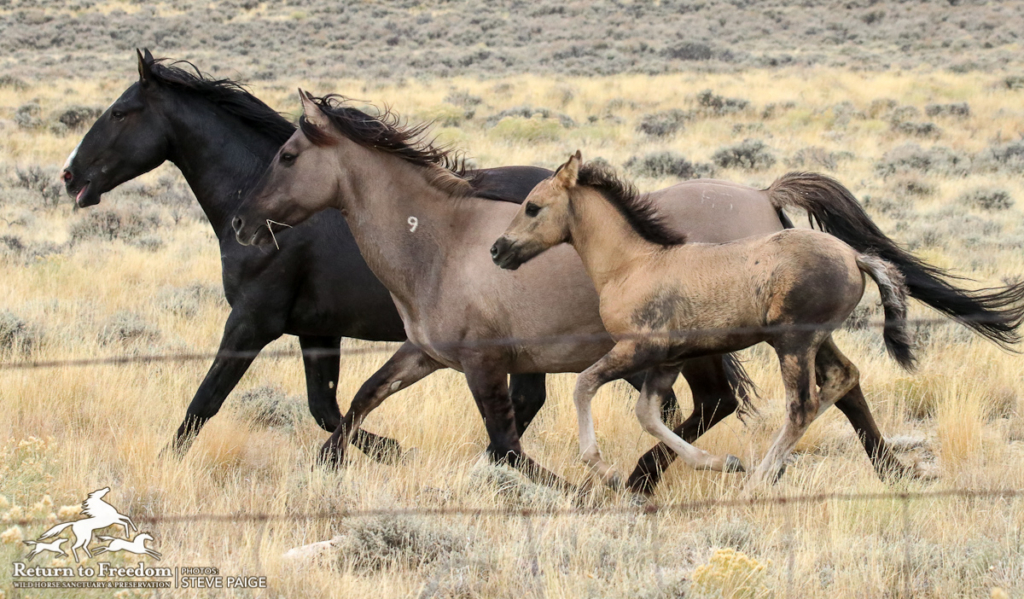 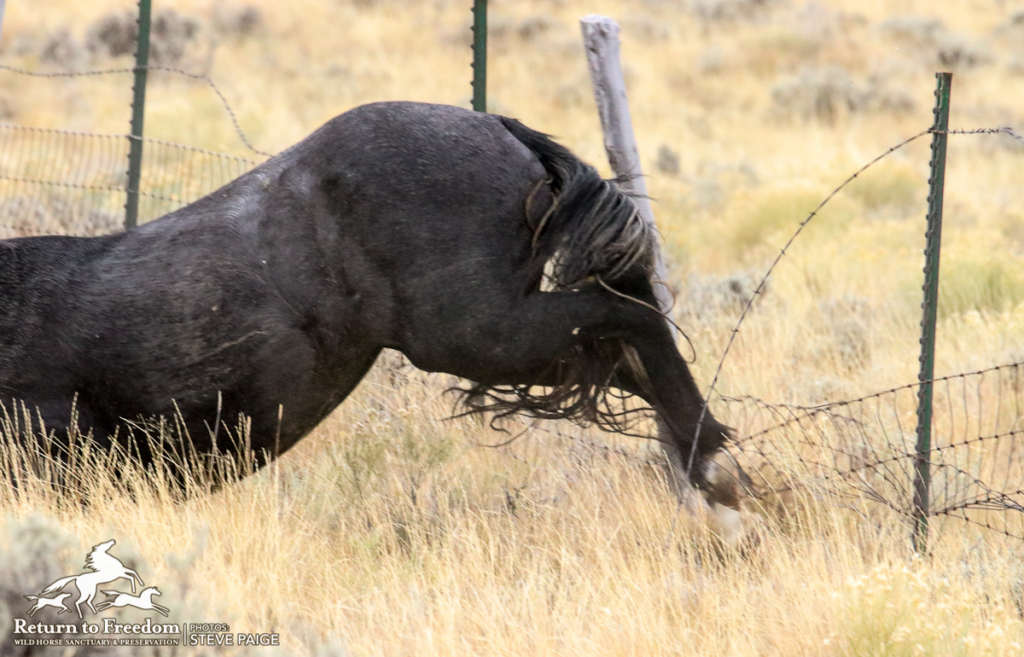 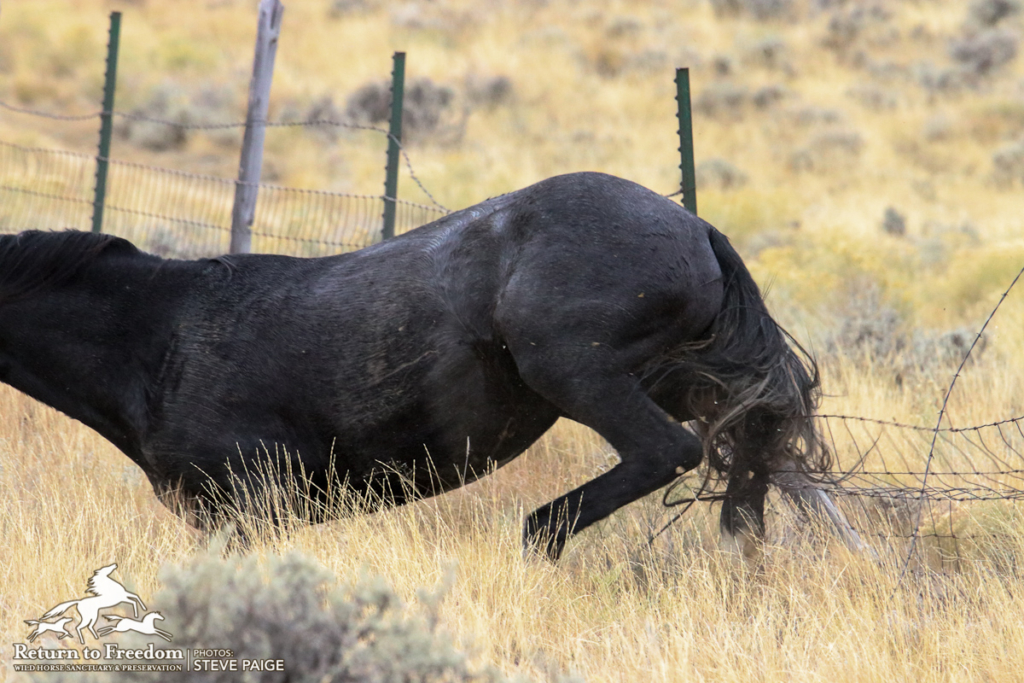 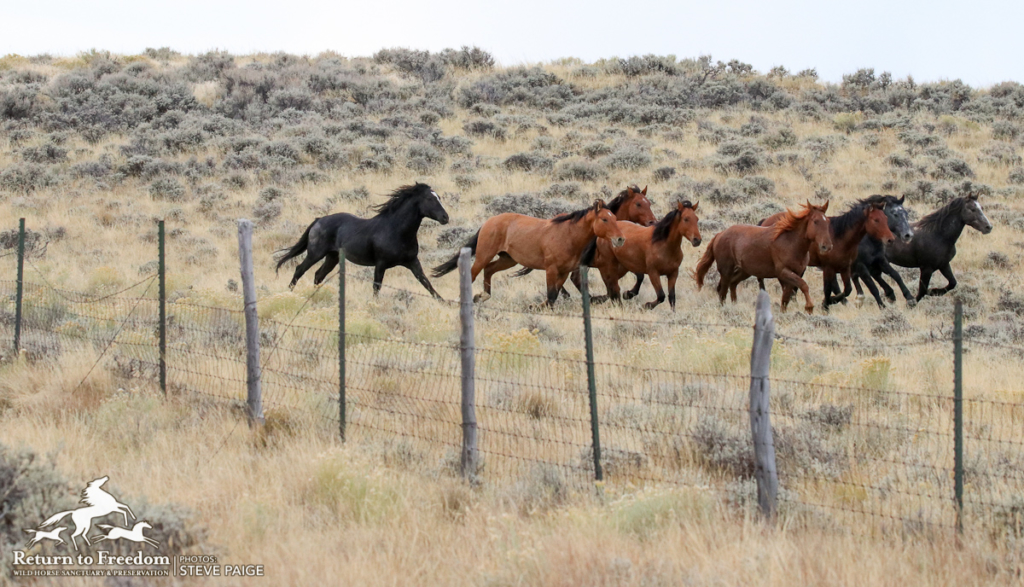